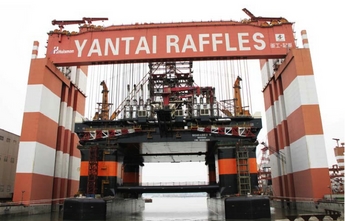 Yantai Raffles said this third commercial lift is the crane’s largest to date, and is the ‘world’s heaviest commercial lift’. Brian Chang, deputy chairman of Yantai Raffles, said: “This is another major feat for Yantai Raffles and is an important milestone in the overall construction of Saipem’s Frigstad D90 semi-submersible, Scarabeo 9.

“Our 20,000t crane Taisun has now firmly realised its reputation as the lifting methodology of the future and we will continue to work closely with Saipem to meet their expectations.”

Niels Haakman, managing director of the Taisun division at Yantai Raffles, gave a presentation of the crane during the recent Cranes Asia conference in Singapore, where he said the giant gantry could be upgraded to handle even heavier loads in the future, as it has been built on a double girder design capable of lifting 30,000t.