A Demag crane system is fulfilling an integral role at the German Research Center for Artificial Intelligence test facility in Bremen.

Three cranes have been installed at the facility, the only one of its kind in Europe, carrying out a variety of lifting and transportation roles at the test facility for submersible robots.

A Demag universal crane travels above the facility's salt-water basin that measures 23 x 19 m and 8 m in depth and is used to lower the research items and technical equipment into the water. The basin has a capacity for 3.4m litres.

The crane's 12.5t load capacity and compact design enables it to serve any part of the basin while radio control allows staff to operate the equipment from the "best possible" position while controlling the crane motions at a safe distance from the load.

The crane hook, thanks to an opening in the ground, can also reach the floor level below to pick up waiting loads and then transport them to the salt-water basin operating level.

In addition, on the lower level, a system was installed that consisted of components from the Demag-manufactured KBK modular light crane system that enables equipment to be handled above an immersion basin.

Elsewhere, a pillar-mounted slewing jib crane is installed next to the salt-water basin, which completes the materials handling equipment at DFKI in Bremen. 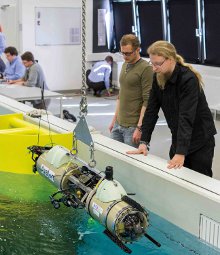