Condra portal cranes for Mongolia mine

A pair of portal cranes due to be supplied by Condra will enable the world’s fifth-largest mine, at OyuTolgoi in Mongolia, to fast-track one of its set-up phases.

The cranes combine a very fast lift speed with optimised cross-travel to waiting dump trucks, says Condra, which will enable the mine to speed up the pre-sink phase at Shaft 6.

Pre-sinking is now expected to be completed in four months instead of the usual 18 months. During the pre-sink phase, the cranes will stand over the mouths of the main and auxiliary rescue shafts and remain in place until the shafts have been drilled, blasted, supported, cleaned and lined with concrete.

South Africa-based Condra began manufacture of the first of the two portal cranes for OyuTolgoi in early July.

The manufacturer researched its advanced portal design in 2013, to incorporate into a prototype machine used at a diamond mining shaft in 2014. The crane features an innovative frame design; an increased lift speed on the main hoist; improved drives, gearboxes and safety devices; better cabin access; and remote control operation.

However, the cranes produced for OyuTolgoi will be larger and faster than those produced for the diamond mining machine, and will feature improved electronics, said Condra. A key improvement is the lifting speed of the 160kW 15t main hoist doubling to 60m per minute.

The portal frame will be 14m-high with a 12m-span, extended by 3.2m cantilevers on both sides to allow excavated spoil to be moved to dump trucks using roads adjacent to the shaft.

OyuTolgoi is a combined open pit and underground mining project located around 550km south of the Mongolian capital of Ulaanbataar. The mine is still under development by Rio Tinto but began producing copper and gold concentrate in 2013. 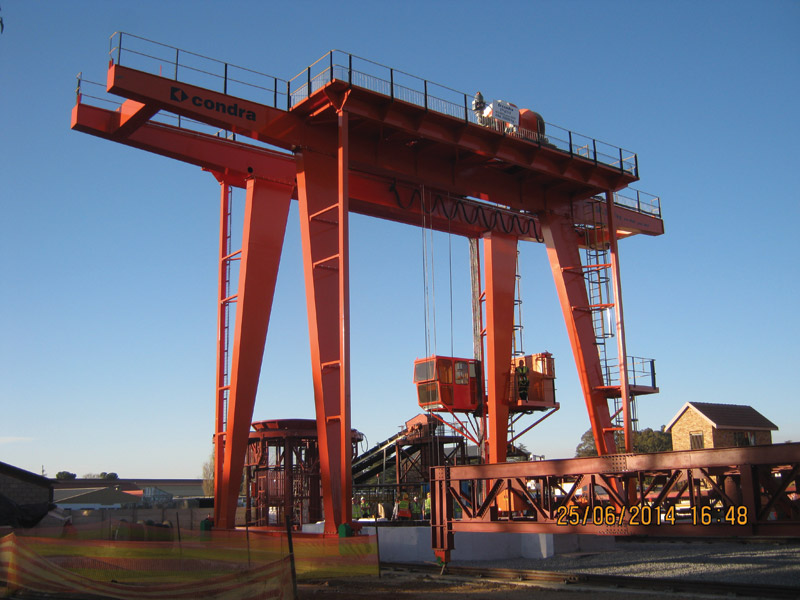