The futuristic weatherproof party destination can hold 250 skaters and features a purpose built bar and viewing area alongside the rink. As well as general skating lessons, it will also be hosting special themed music nights. 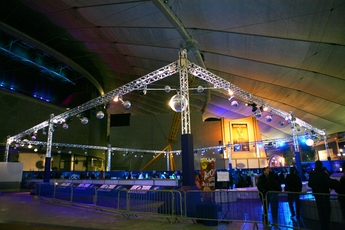 Blinding Light, who had previously worked with O2 brand experience agency Sledge on another project for the venue, was approached to provide the lighting rig system for the 32m wide by 32m deep Ice Disco.

The team considered using a flown truss in order to suspend a huge mirror ball over the centre of the Ice Disco, but as snow loading limits prevented this from being hung from the roof, they opted instead for a ground support system.