JDR Cable Systems has installed a 72t overhead crane for reel loading and unloading in a new marine cable factory, it was announced late last week. Street Crane Company supplied the crane that will be used to ensure high volume production from a new vertical lay-up machine (VLM), the company stated.

The factory crane package includes an 11m span double girder crane with a 72t safe working load and a custom-built VX hoist, operating on a 30m-long freestanding gantry system. The gantry was installed prior to the erection of the building shell and the completed crane was used in the assembly of the carrousel at the core of the VLM. Once the carrousel was installed, end-stops were fitted to the gantry to limit crane travel and protect the top part of the machine, Street Crane Company stated.

"It is relatively unusual for an overhead crane to be pre-installed and used in the equipment build phase, the rare exceptions being power stations and aluminium pot lines," said Chris Lindley-Smith, sales director, Street Crane. "At JDR Cable Systems, the crane is a key part of the manufacturing process making an important contribution to the productivity of this capital intensive and highly specialised manufacturing operation." 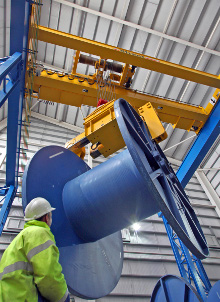