The goliath cranes are needed to produce 30-40m M Class tri-deck yachts at Devonport Dockyard in the UK. The cranes will be used to lift move and accurately place large fabrications during yacht assembly.

As the South Yard assembly facility where the cranes were installed was a light-weight wide-span space frame building, and could not take the weight of the cranes, freestanding gantries were erected inside it.
Street Crane installed floor running goliath cranes and used a slim leg design to maximise hook coverage in the manufacturing area.

Of the three cranes installed on the site, two are 16t goliaths spanning 13.75m, and serving the main assembly area. These goliaths were designed with twin hoists of 8t lifting capacity that can be used independently or in tandem.
The company also installed a 28m span goliath crane, with hook coverage over the whole production area. It has a single 16t hoist and will share the outer running rail of the smaller goliaths.

Street Crane's said it will use ZX hoists in order to offer its client high positional accuracy with true vertical lift and fall, and protect fabrications and components from damage by lateral movement.

All the new cranes were fitted with safety features such as warning beacons, alarms and an automated anti-collision system and wire free radio controls allow crane operators to select a position to maximise their visibility and safety. Pendant controls provide a back-up means of operation when required.

Street Crane and Princess Yachts have a preexisting business relationship, with cranes from Street being used at all Princess manufacturing sites. The company first installed ten cranes at the Coy Pool factory in 2002, when eight 6.3t cranes and two 25t cranes were installed to build V Class sports boats.

These cranes were later relocated to a new factory when the Princess model range was extended. 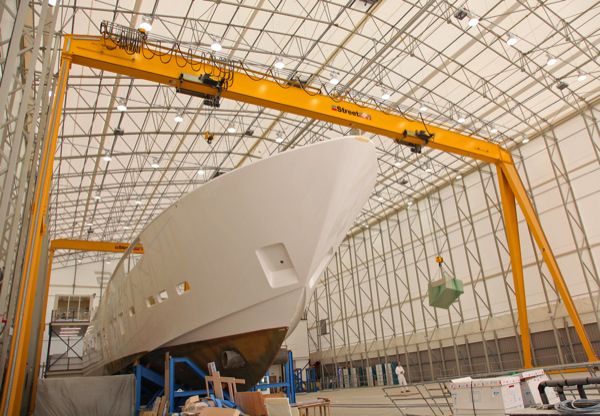