The large ‘party tents’ that span Munich’s Oktoberfest are one of the icons of the festival, with enough room altogether for well over 100,000 revellers. Pletschacher, the Dasing-based company tasked with erecting the tents, employed a double-girder bridge crane and electric chain hoists supplied by Konecranes to assist the process.

To enable Pletschacher to transport the components of the tents—including wooden beams, tarpaulins, planks, wall elements, and even the large ‘stein’ beer mugs—Konecranes designed and supplied a double-girder bridge crane with 2x5t capacity, electric chain hoists, and a 10t heavy-duty forklift.

The Konecranes equipment is used in Pletschacher’s storage area at its Dasing facility, which comprises 16,500sq m across four halls. The company stores the tent components on Euro-pallets, in skeleton containers and in transport boxes up to 5m long. These loads, which weigh between 100kg and 5t, need to be moved quickly, precisely and reliably. Walter Fischer, sales manager at Konecranes, said: “Any delay costs Pletschacher and its customers a lot of money. On days like this one, just before the Oktoberfest, the work pretty much never stops.”

Konecranes designed the customised bridge crane and chain hoists to meet the requirements of the project. The crane, which has a span width of 18.5m and a capacity of up to 10t, has a distance of 3m between its two hoists to be able to move bulky components, and is fitted with Konecranes’ Synchro-Hoisting hoist synchronisation feature, ensuring identical hoisting speeds even when lifting different loads.

Pletschacher also supplies other large festivals including Gäubodenfest in Straubing, the Cannstatter Wasen, and other Oktoberfest events. 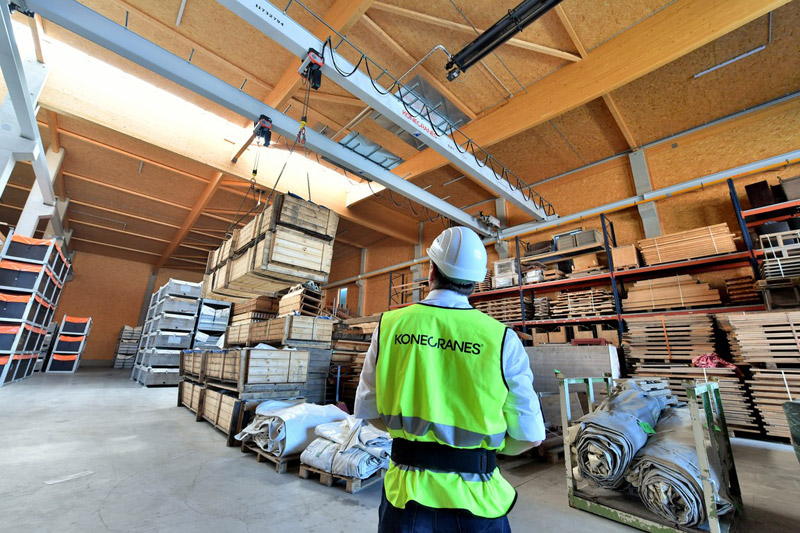