One, a high-pressure motor rated with a 12,000lb (5.4t) capacity, is designed for lifting utility loads. The other, operating at a much lower 350lb (160kg) capacity is for man-lifting.

The dual-mode concept is aimed primarily at onshore oil drilling rigs, where space is at a premium.

‘There is often a need on such rigs to lift a man to, say, the top of the derrick to perform, inspections, maintenance or repairs” says Jennifer Eckert, global product manager for Ingersoll Rand’s Material Handling Business. It is inadvisable to use the rig’s normal utility winch for this. “Such winches have capacities of around 5t; if the operative being lifted should, say, catch his foot while the winch is still pulling him upwards, serious injury could result.”

It was just such a fatality, on an offshore rig in the year 2000, which set Ingersoll Rand on the road to devising a safer solution—a winch designed specifically for carrying people. Their first dedicated man-lifting winch was launched the following year. With capacities of around 350lb—of the same order as the weight of a man—these can lift with ease but will not cause serious injury in the event of any entanglement.

“Offshore rigs now use dedicated man-lifting winches as standard,” says Eckert. Onshore rigs, however, do not. They are much smaller, because they do not have to function as life-support systems for the workers and the work being carried out on them, and also because they have to be disassembled onto semi-trailers and moved to new locations after fairly short times. Space on such rigs is therefore much more restricted, and having two winches in place of one has not caught on as a concept.

“Nor are there onshore equivalents to the international maritime safety regulations that apply to offshore rigs to enforce their use,” says Eckert. Sales of dedicated man-lifting winchesfor land-based rigs have not taken off.

Yet in March 2016 there were 520 land rigs operating in North America. In March 2017 there were 994. Today there are 1,156. And most of them would appear to be using heavy-duty winches for man-lifting.

Hence the thinking behind Ingersoll Rand’s new offering. A single product, it takes up the space of only one winch yet safely accomplishes the two different functions of lifting heavy equipment and lifting people.

Built around a single rope-winding drum, it is based on the Ingersoll Rand ‘Hydraulic Force’ series of winches, which are designed specifically for land rigs. Instead of one hydraulic motor, however, it has two. The utility motoris mounted on the left-hand end of the drum; the man-lifting motor is on the right-hand end.

A specially-designed—and lockable—mode selector switch shifts between them. Separate levers—again, one at each end of the drum—control each motor, so the operator can be certain which mode he is in.

An additional safety—introduced at the suggestion of customers seeing the prototype—is that the cover to the mode selector can be locked. A protocol in which the key to it is carried by the man being lifted giving him confidence that even an operator unknown to him cannot switch to the wrong mode.

A relief valve on the man rider motor is tested and set at the factory, preventing the winch from lifting a load that exceeds 125% of the rated capacity of the man rider mode. In case of an emergency a two-way valve with a lever enables a quick shutdown of the system. In addition, if the rig were to lose power, the winch can be connected to an auxiliary hydraulic system to support the safe lowering of the worker or load on the end of the wire. And multi-static disk brakes on each motor combined with counterbalance valves provide redundant braking systems in each operating mode.

The aim is to provide onshore rig operators with the option of enhancing safety while purchasing and maintaining one winch instead of two. “This is the most innovative winch design on the market,” says Eckert. “The underpinning technology solves our customer’s fundamental safety, space and productivity problems that come with operating and maintaining two different winch products. With Ingersoll Rand’s dual-purpose winch, one motor lifts heavy equipment and the other lifts personnel. We’ve removed the hassle.” 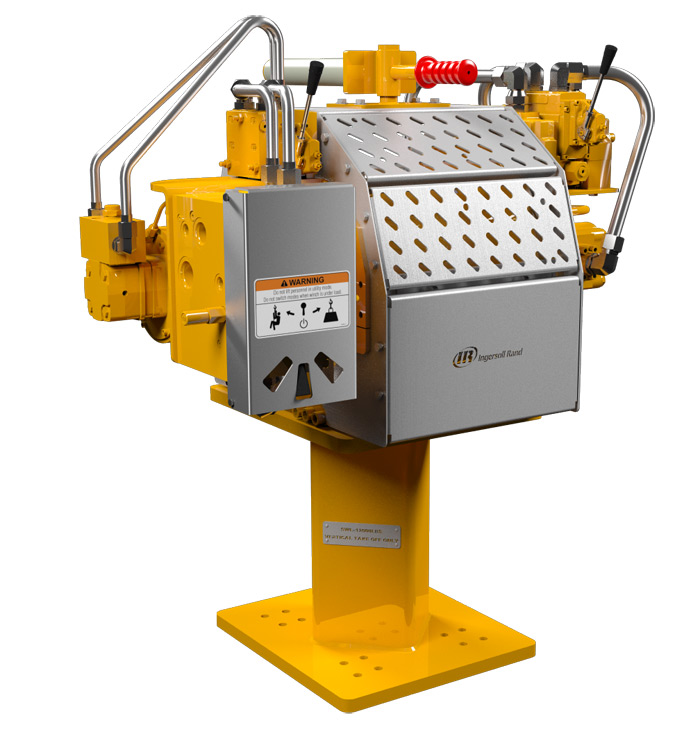