J.D. Neuhaus is converting its entire plant to modern and energy-efficient LED lighting, in a further move towards its sustainability efforts.

With the switch to 100% green electricity in April 2021 and the expansion of LED lighting, the 27,000 m2 plant in Witten, has nearly completed its area-wide changeover campaign.

The 262 conventional lights installed in the plant halls in the 1990s have already given way to 200 high-performance LED lights. A further 55 LED lights will illuminate the entire plant by 2022.

“This is a long-planned and cost-intensive, but naturally necessary step in the modernization of our plant halls. In addition, there is a great potential for energy savings, which ultimately also has an impact on our environment and thus supports our sustainability plans,” said Armin Decker, plant manager, J.D. Neuhaus.

LED lamps consume more than half the electricity of conventional fluorescent tubes. Due to the increased service life of LED technology, J.D. Neuhaus reduces its maintenance requirements and saves costs. In addition, LED light illuminates the factory halls with significantly brighter light, which meets the high requirements for workplace lighting in the production and assembly of lifting equipment.

When it comes to disposing of old fluorescent tubes, J.D. Neuhaus relies on specialist companies that process them in an environmentally conscious manner in special recycling facilities. This is because fluorescent tubes are usually filled with noble gases such as neon, helium, nitrogen, carbon dioxide, mercury, krypton or argon. These substances, which are harmful to health and the environment, must be disposed of separately and therefore require special care.

“With the construction of a new production hall in 2013, we used LED lighting in the factory halls for the first time. When the retrofitting measures are completed in 2022, we will have taken a big step in the right direction. Only by implementing individual projects like this we will be able to achieve our major sustainability goals,” added Wilfried Neuhaus-Galladé, MD, J.D. Neuhaus. 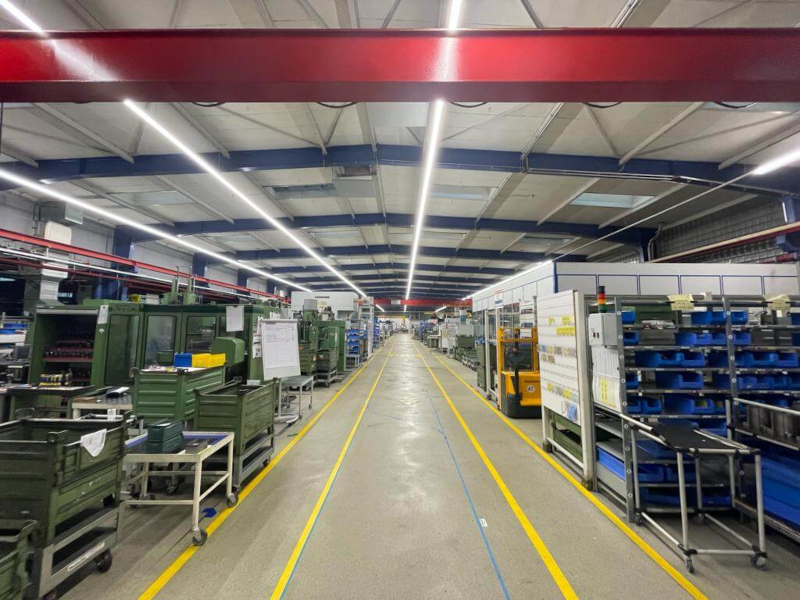