A wood-fired Combined Heat and Power station in Hamburg- Lohbrügge uses natural woodchips from forestry and landscaping work to generate some 13m kilowatt hours of electricity from renewable resources every year. The 60,000 MW of heat that is generated at the same time is delivered to a neighbouring district heating plant that supplies more than 8,000 households. The plant represents a €13m investment and reduces carbon dioxide output by 23,000t annually.

Fuel is moved from the delivery point to the furnace by crane. The double-girder overhead travelling crane at the site is a Demag 16.4m span, 11t capacity hoist with a lift height of 24.5m. An 8m3 multi-jaw grab is fitted. It is fully automated, and the technology plays a key role in the energy-generation process.

The crane is precisely controlled by the Demag warehouse management computer (WMC). One of its tasks is control of the motordriven multi-jaw grab. The grab is specially designed for handling wood, since the material is delivered to the facility in its natural and very variable state. The unit reliably picks up loads ranging from finely shredded wood to small branches and compacted material. Some 32,000t of woodchips are supplied, by truck, every year. At least 140m³ of material has to be handled per hour.

One of many strategies that were included in the control system by the crane supplier optimises this part of the process. When the grab buries itself in the material to pick up a load, the grab jaws are not initially fully closed. The crane takes the strain and a small amount of material trickles out. The grab can then be closed with the optimum fill level.

The tipping pit needs to be cleared quickly to avoid bottlenecks and lengthy waiting times for incoming trucks. This, too, is a task performed by the WMC. Access to the 300m³ tipping pit is controlled by means of an integrated magnetic card scanning system. As soon as a truck has passed through the weighing station, the barrier is opened and the area above the tipping position is blocked for any crane operation to prevent damage to the grab caused by material from the truck falling on top of it.

Once the truck has deposited its load, the crane receives the command to start clearing the tipping pit. It moves the fuel to one of three stores, depending on its quality. A Demag active load-sway damping system ensures that despite the narrow area collisions by the grab against the walls are avoided.

Besides the stores, which have a capacity of 900m³, there is also a silo for approximately 700m³ from where the fuel is delivered to the furnace by a sliding section.

In addition to its actual transport duties, the process crane is also responsible for blending the materials in this silo. This needs to be done, for example, if quality assurance reveals that wood cuttings from landscaping work are too wet or do not meet the minimum heating efficiency requirements and need to be blended with high-quality wood from forest sources. As soon as the required blending ratio has been set via the user interface of the Demag WMS, the crane automatically approaches the three corresponding storage zones, picks up the required amount of material, and blends it in the silo.

The fill level in the silo is monitored by fixed sensors. As soon as the minimum fill level is reached, the control system of the automatic crane ensures that the silo is replenished with the correct blend of fuel.

The crane’s fully-automated solution for the whole process from arrival by truck to delivery to the furnace achieves maximum efficiency while retaining flexibility. Its control system uses multiple parameters from many sources to achieve intelligent delivery of fuel.

Quebec city processes 280,000t of waste each year. The waste is burned and converted to steam for consumption by local clients in a combined heat and power plant. Equipment in the plant was reaching the end of its service life.

Quebec city needed to modernise the system without interrupting its round-theclock operation.

The cranes on the site had been installed in 1974, and were outdated, in particular their energy consumption was by today’s standards excessive— “astronomical” in the words of senior engineer Yves Fréchet. Nor were they reliable: despite weekly maintenance, interventions had to be carried out on them almost daily. During those times the furnaces could not be fed, causing considerable disruption and costs.

They were replaced with higher capacity Konecranes units with new controls and power systems and full automation.

To install the new cranes while the old ones were still operating, a temporary ‘parking area’ for the new cranes was built from which they could be rolled straight into position. There was tight co-ordination so that as soon as the cranes were on the trackway they were already ready to be used. There was no lag time between installing the cranes and operating them, and there were no intrruptions to daily operation.

The installation resulted in a 12% saving in energy. Precision has been increased, down to centimetre accuracy. Inspections are carried out once a week, but that is all that is needed. The old cranes cost up to C$400,000 a year to keep in service; costs are now down to C$100,000.

The Drax power station in Yorkshire is the largest in Britain. Originally built to burn coal, it is now powered partly by biomass.

A recent investment has been a prototype plant to process straw into biomass pellets at nearby Goole. The pellets are then burned in a carbon dioxide-neutral co-firing operation at the main power station.

Demag state-of-the-art hoist systems are used at Goole to handle and transport the bales of straw. A double-girder overhead travelling crane with a sophisticated grab dominates the new 1,700m² storage area.

The installation has a load capacity of 22t on the hoist ropes and a span of 28.3m at a height of 11.26m. The variable-speed travel drives are fed by frequency inverters and are rated for cross-travel speeds of between 2–40 m/min and from 3–60 m/ min for long-travel motion.

The building has storage capacity of up to 936 bales, each measuring up to 2.5 x 1.3 x 1.2m, and the hoist can stack them in a pyramid to a height of 8m. Up to 400t of raw straw is delivered to the plant by truck each day. To store the material, the hoist is positioned above the delivery vehicle.

Six grabs that can travel in the longitudinal direction and which can simultaneously pick up 12 bales serve as the load handling attachment. The grab is divided into two independent groups; lifting speeds are load-dependent.

With a maximum load of 12 bales of straw, the system lifts with a speed of 16m/ min. For loads that weigh less than 50% of the maximum load, the hoist operates in the partial load range at 24m/min. Integrated electronic overload detection with an automatic cut-off system gives increased reliability.

When sensors have checked the moisture level and the load has been accepted, the crane switches into automatic mode and transports the bales to the allocated storage location, where they are deposited with a positioning accuracy of within 15mm.

A ‘travel mission’ is triggered as soon as the production installation sensors indicate that replenishment is necessary. In accordance with a defined routine the crane automatically picks up the required number of bales and transfers them to a conveyor line, which transports them to the production plant.

The scheduled annual production of 100,000t of pellets at the Goole plant replaces around 60,000t of coal in the power generation process and reduces carbon dioxide emissions by 120,000 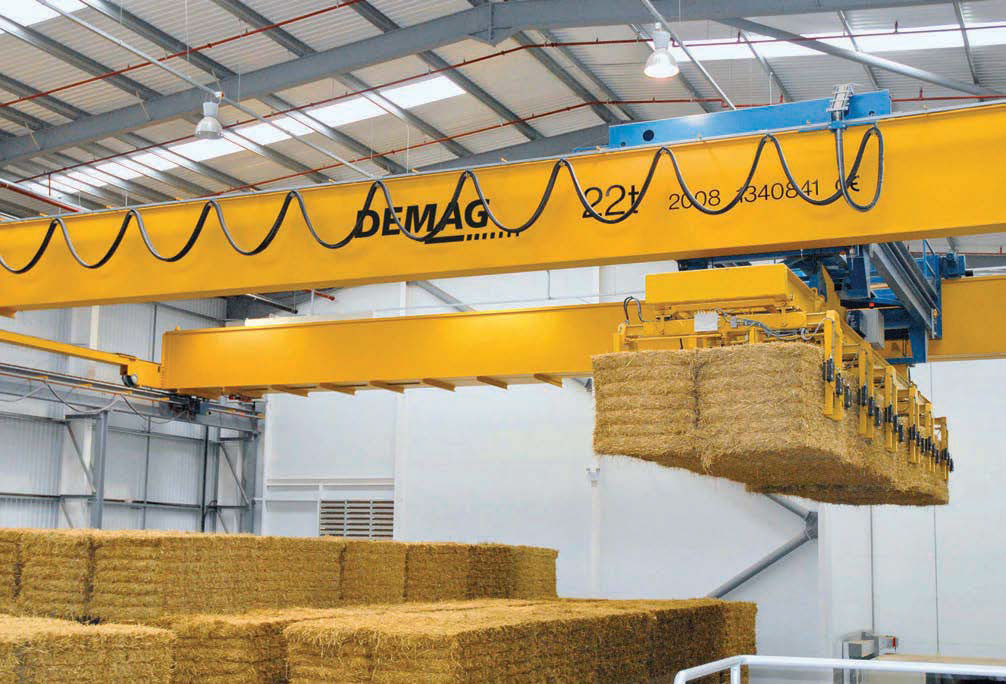 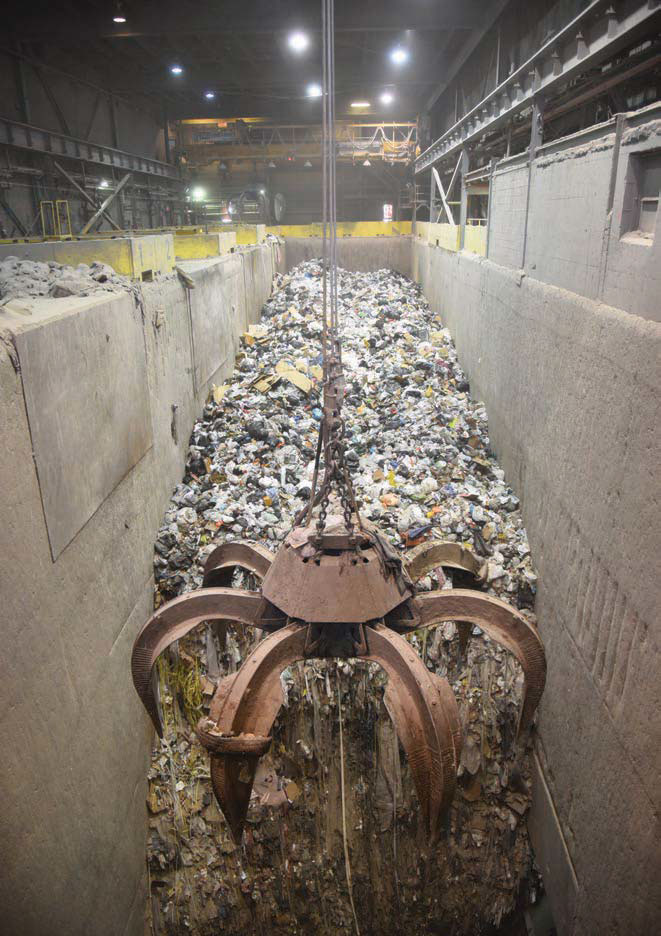 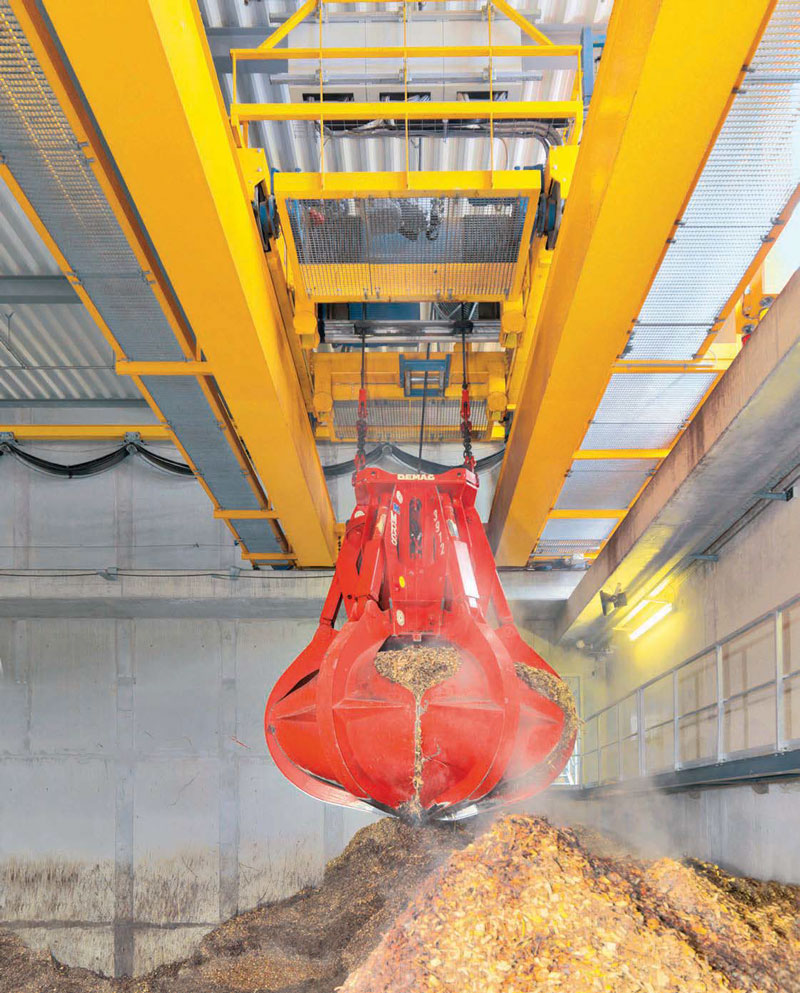