The height of entertainment

When entertainment events resume around the world, specialist stage lifting manufacturers will be ready for them. Julian Champkin looks at latest products and some recent shows that took place prior to Covid-19.

Switzerland-based GIS has two new products for the entertainment market—the company was going to showcase them at Prolight & Sound in Frankfurt before Coronavirus stopped their plans.

Despite that, a couple of hundred units have already been sold in the short time since they have become available.

What particularly distinguishes them is their light weight—one might say their extremely light weight. “Customers told us that existing hoists were too heavy,” says the company, who are clearly proud of their achievement: “The extremely low net weight of the two motors, in relation to their lifting capacities, is astonishing.” The hoists have the lowest self-weight in their class, adds GIS: each hoist can lift over 40 times its own weight.

The smaller capacity version, called the LPML, weighs in at 12kg (or 20kg with chain for 18m lifting height) and delivers a lifting capacity of half a tonne. The larger 1t LPL when fully equipped for an 18m lifting height weighs in at just 30kg. Aluminium housings and covers account for some of the weight savings; more comes from the case-hardened profile chain, which with the same nominal diameter as round steel chain offers around 15% more capacity.

The series was developed especially for the entertainment industry, and meet the German D8 standards for that sector. They have IP65-class protection against dust and water jets, which makes them suitable for outdoor as well as indoor use. A skeleton load hook has a guided safety catch and damping system for maximum safety; a second DC spring-mounted brake can be mounted without difficulty on the existing shaft. There are options for low voltage control, high and low hook position limit switches, and the GIS load and path (LPM) measurement system.

Both models have been designed to fit optimally in conventional cross beams; the overhang is so minimal that they can be transported between venues while still installed, to save space. Modularity and low maintenance requirements were other design considerations, and GIS offer an extended product guarantee of three years.

Light weight is also a feature of Kito’s theatrical hoists, their TNER series, which was originally launched in North America and is now available in the Japanese market as well. A typical use is to attach them to stage superstructure to raise trusswork already fitted with lighting and audio equipment. As the hoists are small and hangs upside down they minimise dead space above it. They’re designed to be compact as well as light, and the lifting and lowering speeds of the 500kg and 1,000kg versions have been unified to meet industry standards.

Black non-reflecting bodies and chains, to keep them as near to invisible to the audience as possible, light weight and small size are typical of stage hoists and the TNER is no exception. Grease lubrication instead of oil has been adopted by Kito to avoid any leakages damaging stage costumes or sets. The case studies below demonstrate how many, sometimes very many stage hoists are these days required to work in automated synchronisation to achieve the spectacular effects which audiences, and promoters, demand.

Columbus McKinnon have a long history in stage lifting with their CM-ET Lodestar range. They have recently launched digital load sensing technology as an optional feature for all new Lodestar units or as a field-ready retrofit kit. The technology is specifically designed for entertainment applications where multiple hoists are used in tandem; it helps ensure that all hoists are taking equal load, thus preventing overloads on individual hoists and the safety issues that would follow.

The system is fully integrated inside the casing, which means that the load cell is protected from external factors and there are no dimensional changes or changes to headroom. Riggers are not put to the additional trouble and expense of new road cases. In the field it connects easily, says the manufacturer, to existing controllers regardless of make or manufacturer, via an internally mounted circuit board assembly which prevents wiring mistakes. The internal load cells provide accuracy of +/- 2% of full scale output.

After two years of technological design work, and a study of what the market currently wants, Verlinde have just announced a widening of their new range of Stagemaker electric chain hoists, which are dedicated to the entertainment industry. They have added Stagemaker SL5 and SL10 models, with load capacities of 500kg to 1,000kg (with one fall) and 2,000kg (with two falls).

Stagemaker, they say, are the only hoists available on the market fitted as standard with double brakes, protective rubber pads, and retractable handgrips—the latter designed to make transporting the hoists easier. The hoist shell is protected by a 70 black epoxy powder coating, which gives resistance to extreme environments down as low as -10C°. Two versions of each model are available, the ‘A’ version with forward voltage and the ‘B’ version with low voltage. Limitflux electromagnetic limit switches are provided as standard on all B-type hoists in the SI range. These lifting units are upgrades on the previous SR5 and SR10 versions and make the range now complete.

The new models are built to IP66 protection standard, and they are also D8+ compliant as standard: the positioning of the clutch in the gearbox ensures load holding by brake whatever the operating conditions of the hoist.

Attention has been paid to the chain sprocket design. A ChainFlux chain guide gives more flexible horizontal flow of the chain where it leaves the lifting load wheel. Low friction coefficient eases the passage of the chain on ejection. As with the entire Stagemaker range the SL5 and SL10 are fitted with PerfectPush, a five-pocket hoist load wheel concept designed to enhance chain guidance and prevent the so-called ‘polygon’ effect, where chain links moving around sprockets produce the effect of a varying diameter and cause the linear speed of the chain also to vary.

The hoists can operate in standard self-climbing configuration or in industrial suspension hoist configuration; the change is achieved without any modification by simply turning the chain bucket. They run at the conventional 4m/min lifting speed but can also be supplied at speeds of 8m and 16m/min. They are operationally silent with a noise level of just 60dBA.

Verlinde, a French company, has recently entered a partnership with Cast Swiss Light Consulting to extend their distribution in Switzerland.

US company Tait Stage Technologies have long been involved in large-scale and spectacular entertainments. Their Nano winch is designed primarily for kinetic lighting installations, to make moving light displays for concerts and dance venues, but many other applications are possible also. It is a lightweight, single point winch; many of them can be made to work together in automated pre-set lifting patterns. Up to ten of them can be supported on a small frame (called a ‘lunchbox’) or up to 40 on a large frame (called a ‘fridge’). Tait do say that up to 2,500 of them could be used on an installation.

Each Nano winch can lift an object weighing up to 10lb (4.5kg) at a maximum speed of 10 ft/s (3m/s). It raises and lowers on a multi-core woven cable that contains a conductive ribbon with wiring to send power and data to whatever LED or other fixture it is carrying. It can send positioning data back to a control point so that, for example, lasers can be aimed to follow the moving loads.

At the other end of the scale Tait have their Big Tow winches, which range from the lightweight BT250 Lite hoist all the way up to the BT2-490 winch, engineered for high speed and high capacity, which can carry up to two tonnes at 2m/s on multiple lines. Complex set changes and counterweight assist are part of their role. The Big Tow range can also carry flying performers in pantomime.

The patented zero-fleet technology allows Big Tows to be mounted easily in different orientations without the fleet angle causing concerns. The rotating elements of the winch are shaft-mounted to allow a variety of gearboxes, brakes and drum lengths to be used. The winches are powered by brushless servomotors and have cross groove detectors, slack rope detectors and load cells.

Minnesota-based crane and hoist specialists Thern have a subdivision specifically for theatres. Among the products of Thern Stage Equipment are clew winches, pilewind and lineshaft hoists, self-climbing trusses for front-of-house lighting rigs, and fire curtain hoists.

Their newly-designed Counterweight Assist hoist is intended for proscenium theatres or other facilities that incorporate counterweight rigging. It is a motorised alternative to the traditional, manually-operated counterweight rigging sets that must be adjusted every time the load changes. It provides control of any line set for scenery, lighting, orchestra shells and battens.

With a lifting capacity of 1,500lb (680kg), when it is attached to a counterweight arbor it provides added capacity with safe and secure control, so that an arbor of 1,200lb capacity can be increased to carry 2,700lb (1.2t). When it is used on its own, with 1,500lb of counterweight loaded it will securely lift a stage batten carrying up to 3,000lb (1.4t) of lighting, sound, scenery or curtains without a single counterweight brick having to be moved.

The hoist is suitable for renovations or new facilities. Multiple CWA hoists can be connected to an optional touchscreen controller, and target positioning is available for precise and predicable performance. 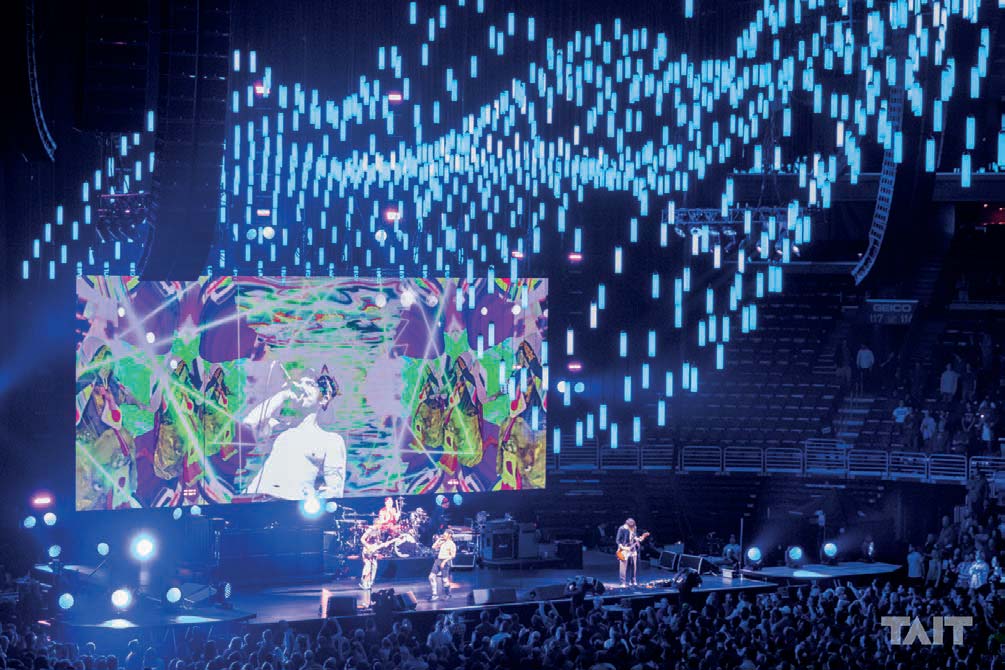 The Big Tow winch as installed at Liverpool’s Everyman Theatre. 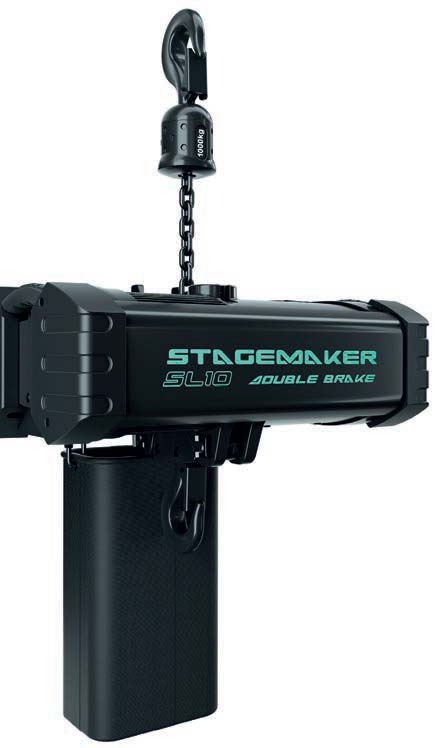 Verlinde’s new Stagemaker SL10, from a range which also includes the new SL5.

The 1t-capacity LPL hoist from GIS also has a lightercapacity companion, the 0.5t LPML. 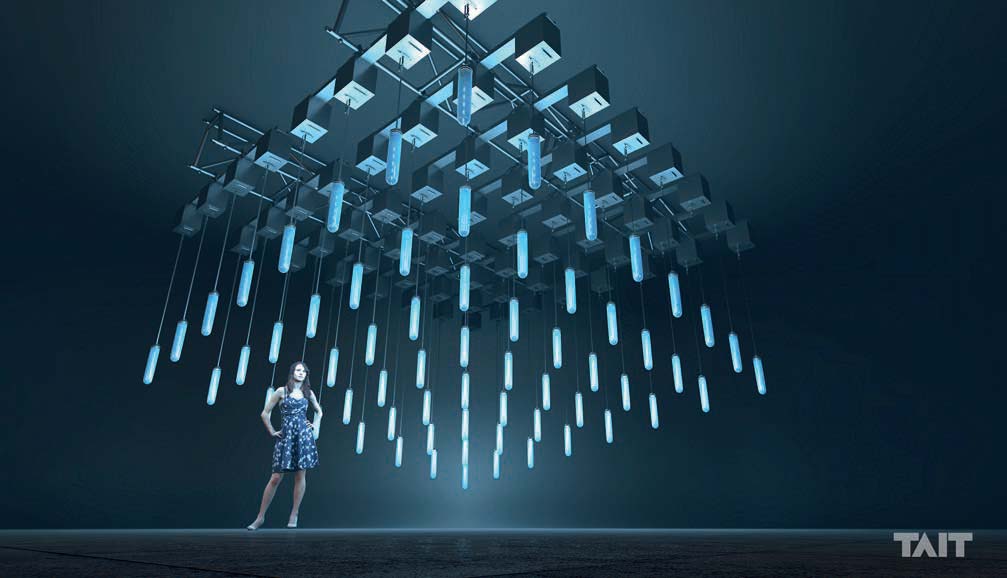 Tait’s rendition of how their Nano Winches can be used.