The world is connected. Digital system talks to digital system universally. Algorithms interpret data and churn out decisions. At the boundary of the net of worldwide interconnectivity laptops, tablets and smartphones interact with real people, who it seems are now becoming rather an old-fashioned concept as far as doing things or deciding things are concerned. Julian Champkin investigates.

Digitalisation is everywhere. It is of course in the lifting industry also. The current buzzword in automation is ‘Industry 4.0’, also known as the ‘Fourth Industrial Revolution’, with the ongoing automation of traditional manufacturing and industrial practices.

How far has it gone, how far is it going and will there still be a role for people in this business?

Well-placed to guide us is George Thompson, who as well as being sales manager, Robotic Systems for hoist-makers Güdel, based in the UK, is currently vice chairman of BARA, the British Automation and Robotics Association.

Güdel manufacture industrial robots and gantry robots; the difference, he says, is that industrial robots are one-armed machines that stand on a pedestal and lift things, and gantry robots are conventional-style overhead monorails and trolleys but with added automation. Both lift and move things; both use similar technology. In fully-automatic mode, he says; “a signal from a sensor or a plc says to a control system that a part is ready for collection, and the robot just goes and carries it to where it needs to go. The operator, insofar as there is one, can be next door or halfway around the world.

Thompson is a man who has advised companies on how much to automate and how best to automate, from large-scale and heavy lifts to small-scale and light ones. “Güdel can supply up to 3.1t lifting capacity off the shelf,” he says. “We have recently done a project where the loads are well over 4t. The loads are railway wheels, and the system lifts them around as if they were biscuits.”

Typical, and relatively simple, tasks for easy automation, he says, are warehousing and distribution. “If you think of it from a distribution centre perspective, which is one of many applications, boxes or crates arrive and you need to depalletize them and stack maybe dozens of components or products until they are ready to go on to their next destination.

“And you need to put the heavy stuff at the bottom, for stability; but you must also arrange the stack so that the next item that is needed is not at the bottom. And there can also be different sizes, shapes and so on of the commodities as well, so you must programme that in; you do that differently for each client. And there are other things you have to do such as conform with machinery directives and safety rules,” adds Thompson.

All of this can be fairly routinely automated. “It is astonishing how many companies still have three or four people huddled round an end-of-line conveyor where they are picking up boxes and putting them on pallets. That gives them health and safety issues around manual handling. They have Repetitive Strain Injury risks, again because of the manual handling. And it is not very efficient, especially when it comes time for lunch break and the people go off duty and the whole place grinds to a halt.”

So automating that simple lift-and-stack- and-pass-the-component-on process will save the labour cost of three or four jobs? Not so, he says. “It does not automatically remove people. A lot of companies go into an automation plan thinking ‘Right, I’m going to get rid of three-quarters of my workforce.’ What you actually find out as you continue the journey is that you end up with probably the same headcount but they are doing different jobs. And they are probably more interesting jobs, and jobs of more value, as well. We tend to try to automate the more dull, the more dangerous, the more demanding positions first.”

In most factories that will include the lifting and carrying functions. “Your machine operatives, whatever task they are doing, will find the components they need delivered to them with no outside help, and without having to stop and fetch it themselves, so they can concentrate on the job in hand,” he says.

What do you need to automate your lifting? Data is one thing; it is supplied by the new generation of sensors which can tell you everything from the position of the hook and the load to whether an incautious bystander is wandering too near your overhead gantry. Software is another need; and Thompson adds a third: “You need to have a vague idea of what you are doing.

“The biggest problem a lot of companies make when they start the automation journey is that they choose the hardest thing in the factory to automate first. That sets them up for failure. If you chose something simple – such as the conveyor unloading - that is going to give you a quick return on investment,” he adds.

“But it is all about balancing the need you have to the budget you have. It is easy to think that just because an automated overhead lifting system costs say, £40,000, that that is an end of it; but there are a lot of additionals that have to go in there as well. Beside all the legislation that you have to comply with there are all the control systems, how you link into them and how much information you want out of those control systems. Do you want continuous real-time feedback of usage and power use and maintenance schedules? It can escalate very quickly. You have got to program it, which is not that simple, and you’ll need software updates every couple of years; but once you have made that initial investment the gantries themselves – the steel overhead track and the trolley and motors - will last quite frequently in excess of 20 years. That’s a problem that Güdel as a company has with our gantries: the things never wear out.”

One of the revolutions that has made all this possible is sensors. A hook, or a vacuum lifter, or a servo-operated grab - has to meet the load, so it has to know where it is. “Our trolleys and hooks can repeat to an accuracy of about 20 microns. Typically, they will go to that position every time and pick up a load – as long as that is exactly where the load is each time. You can put vision systems onto the hook, and then the load can be a little bit off its zero position. The camera can give the coordinate shift to the gantry, or to the robot arm if that is what you are using and guide it to the load from there.”

Picking up components that are randomly piled in a crate is harder, he says. “It is not impossible but it is definitely challenging. For that, light is king. You need sufficient lighting for the camera system, and enough contrast between the items you are trying to pick up. If you have a containerful of brown cardboard boxes, from the camera’s perspective it just looks like a sea of brown. But stick a logo on each box, and the camera can focus on that. Or you can paint your boxes different colours, though using colour cameras is a little more expensive than monochrome. Another technique is to use barcodes. The camera can find the barcode to locate the box, and that tells it as well what is inside, and so where it should be carried to. That is used a lot in the food industry where you have one large gantry that is sorting say 15 different products at the same time. You may not have enough throughput to justify a dozen industrial robots, one for each product, but you can have one gantry that does different things to different products. It is about choosing the right automation for the right application.”

Industry 4.0 is a goal but it is not needed for all and we are not there yet. For a self-contained system, but one that still uses digital interactions to achieve synchronous control of two different cranes, Demag has its SafeControl system, designed for handling joint lifts (see above). For what is currently achievable in a large system that is integrated with its plant, consider Street Crane Express Special Projects aluminium rolling mill in Oman (see p36) And for progress towards the goal, Dieter Feldhinkel, technical director of SWF Krantechnik, with his colleague Karlheinz Schäfer, product manager for Wire Rope Hoists, can tell us more.

“Currently SWF Krantechnik is working on the gradual modernization of all of its electrical components,” they explain. “We are laying the foundation for the development towards Industry 4.0. and preparing for the new digital and interconnected working environment. To this end we are currently developing a hardware platform for monitoring single hoists and cranes up to sophisticated installations that consist of several cranes.”

In other words, your lifting system does not have to be huge or high-capacity to become automated. As we have said, even little hoists can join this brave new world. “The new SWF hardware platform is fully scalable. The Nova Silverline electric wire rope hoist series is designed for loads from 500kg up to 80t and the complete series can be designed as automated process cranes.”

How does it all work? “The hardware platform is supplemented by further electrical components which will be launched step by step. The complete package includes firstly a new hardware for hoist monitoring. Our original ‘NovaMaster’ hoist monitoring system will be replaced by the digitally networked successor called OMNI control. Going forward, OMNI control will be a cornerstone for digitally optimized work processes and will open doors towards all digital network technology of the future to ensure hoist management in perfection.”

Digital control works best on frequency inverter motors. “SWF has a new generation of frequency inverters, the VARIO control series” say Feldhinckel and Schäfer. “It works on the CANbus network, which means that it is already equipped for the future. The VARIO control frequency inverter is configured by using a Bluetooth dongle connecting to a smartphone app.” (Observe here the ubiquity of the smartphone, otherwise known to computer-heads as the digital-human interface. It looks like becoming an integral part of Industry 4.0.) “Going forward” they say, “the advantages of the CANbus network will make additional hardware or tools completely unnecessary. We will be launching a gateway modem, a new family of radio remote controls, and simple-to-use apps for programming. All components are based on bus technology. This technology links the electrical components and they communicate with each other via the bus system. In this context OMNI control will be at the heart of the digitalisation of the crane system in future.

“Compared to the predecessor NovaMaster, OMNI control is more flexible when it comes to integration in frequency-controlled lifting. It has more programmable inputs and outputs and can process a higher number of simultaneous tasks.”

Is this then the full interconnectedness of Industry 4.0? Not quite, they say. “In the current implementation phase pure crane data are processed. In the future, equipment from SWF Krantechnik will provide an interface for the exchange of master data. With the gradual modernization of all electrical components SWF Krantechnik is laying the foundation, and this is an ongoing process that we are continuing to pursue. Our product portfolio already serves the entire needs of today’s market but there are still some steps to go to realize the full implementation of Industry 4.0.”

So if we are not quite at Industry 4.0 yet, still we are on the way. Should we say that we are at Industry three-and-a-half? 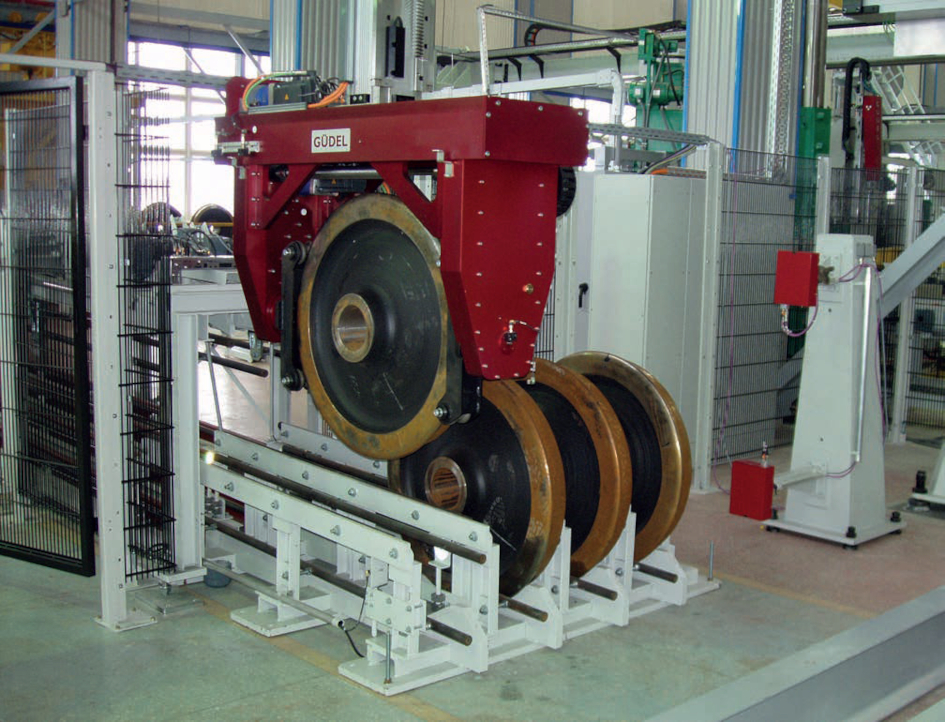