There is a growing movement in the hoist sector towards wireless control systems that can ensure greater safety and less downtime for operators, as well as intelligent devices that provide increased levels of production data. Tom Woerndl reports.

The advent of wireless solutions in the last decade has seen both industrial and consumer technology move towards ‘hands-free’ and more portable products. At a domestic level, the benefits are clear, as such technology can be used by individuals in the home to live more conveniently and flexibly.

Jim Kluck, global product manager for Magnetek-brand controls and automation systems at Columbus McKinnon, a US-based lifting and motion control specialist, confirms that the hoist sector is moving away from systems that require extensive wiring.

“There’s definitely been a push in the last few years to simplify controls and streamline wiring by, for example, utilising a point I/O block that transmits wired I/O through a single Ethernet cable, along with the Ethernet connections to drives and sensors.

“By reducing the amount of wiring, troubleshooting becomes easier for operators, who no longer have to dig through a bundle of wires to find the problem.”

One knock-on effect of fewer wires is said to be reduced downtime, lower labour costs and smaller panel size. “There is also a cost benefit for operators, as they’ll be using less copper wiring for inputs and outputs,” adds Kluck, who says that crane users are increasingly using radio-controlled systems to stand further away from loads. “As a result, we are seeing more and more demand for these types of systems with wireless connectivity, although operators still like to have a pendant for back-up.”

Radio-controlled systems can additionally simplify and streamline operations by reducing the amount of devices in a production environment that are liable to fail, while also decreasing the amount of technology that is more likely to suffer from wear and tear.

All of the operations are controlled by a single transmitter, with the cranes used by Nortek to lift a range of loads— including custom ventilators, coils and air handlers—which are manufactured at a recently expanded 200,000 sq ft facility in Montreal.

“A key benefit of our radio-controlled systems over traditional solutions is that we’ve eliminated festooning,” explains Miguel Tellez, managing director at Tele Radio. “This means that no cables need to be installed to control the functions that are handled by each independent receiver.

“Consequently, the system is more cost-effective, because festooning can be quite expensive. In addition, having no cables means that there is no wear and tear with those cables.”

According to Tellez, having just one transmitter for each crane also allows quick and easy part replacement in case of break downs. “In a facility where there are numerous cranes, each with one of our transmitters installed, a spare transmitter of the same family can be used to replace a damaged one,” he continues.

“So if there are 50 cranes, one spare Tele Radio Panther transmitter can be used to replace a faulty system. With most of our main competitors, a spare transmitter is needed for every crane in the facility.”

Andreas Bahls, sales manager at Tele Radio, adds that the Panther system is easy to set up and operate, while it also benefits from working at 2.4 GHz, which enables the use of hundreds of systems in the same area. “Our success with this type of solution means that crane manufacturers and operators now trust wireless systems such as these,” he explains.

Bahls notes that the Panther system can be adapted to almost all standard overhead crane applications, and one transmitter can operate four separate cranes independently, while multiple transmitters can be allowed to communicate with the same receiver.

Installation of systems such as Panther is usually carried out by the OEM or end user, although Tele Radio can provide assistance with special requirements.

For the Nortek project, Canadian Stahl CraneSystems distributor CanStahl installed the 18 single-girder EOT cranes, 15 of which work in tandem with two hoists. In North America, indoor cranes are usually fitted with wire rope hoists but, in this instance, chain hoists were used to lift loads in tandem operation without any sideways movement of the hook.

In general terms, Tellez says the North American market for control systems has changed significantly in the last two decades. “When I moved to the US from Spain 15 years ago, it felt a little bit like I was stepping back in time, as remote controls used to be a luxury item,” he explains.

“However, as the safety and reliability of remote controls improved, and the cost of high-end solutions came down, applications that require cable control have gradually disappeared.”

While radio-based systems may help to reduce downtime and associated costs, other ‘wireless’ technologies—such as infra-red or laser-based control units— are also being used to control cranes more precisely, and thus ensure greater levels of operator safety.

Canada-based Munck Cranes recently began using laser technology from Schneider Electric that acts as an anti-collision device with dual outputs. The systems are used to slow and stop cranes, with a range of up to 70m.

“If you want to perform a tandem lift with two cranes, one controller is used as the master and, when the cranes are placed into the tandem mode, a wireless signal is sent to both cranes that ‘teaches’ them the distance between the cranes,” explains Murray Chamberlain, electrical department manager at Munck Cranes, which is based in Hamilton, Ontario.

“The sensors then monitor the distance between the cranes and, if there is any deviation, the system will automatically stop both bridges.” The radio controls for the Munck system are supplied by Tele Radio.

Chamberlain adds that the company is also seeing an increase in the number of customers who are opting for VFD (variable frequency drives) for the hoisting motion, as operators begin to realise the increased flexibility this provides, such as extreme slow speed availability, high lifting speed, torque limitation, and reduced wear and tear on all of the components, specifically the brakes.

“We use the new Schneider 930 series drives, and another comment I would make is that recently we’ve been seeing a lot more operators request radiocontrolled transfer vehicles for in plant usage, as it allows movements of large loads into multiple bays with ease,” he notes.

An enhanced level of crane control is also being offered through a key recent development by Columbus McKinnonowned Magnetek, called ‘no-fly zones’, which refers to systems that limit or restrict entry and operation of a crane in protected areas of a production facility.

“This solution is all about safety, and ensuring that operators move the load along a path away from potential hazards like storage racks, in-plant offices and assembly stations,” says Casey Cummins, product manager for Magnetek-brand controls.

Depending on the application, the nofly zone system can incorporate a range of motion control products, including variable frequency drives, radio remote controls, limit switches, and sensors to designate locations where a crane is programmed to reduce speed and stop. Operators then use an HMI or web interface to oversee controls and the setup of no-fly zones.

“In particular, we have seen manufacturing plants in sectors such as steel, automotive and power generation show an interest in no-fly zone systems,” explains Kluck. “All of our control systems are based on real customer demands, and this technology truly minimises risk of damage to equipment.”

Along with safety and greater crane availability, a number of industries are also demanding curated diagnostics and analytic information to be delivered to their control systems, and even to handheld computer-based devices.

“Operators want information, but they don’t want too much, and they want the right data,” explains Cummins at Magnetek. “This can help facilities to schedule maintenance, recover more quickly from faults, and therefore reduce downtime.”

Andreas Bahls at Tele Radio, agrees: “Information, for instance about weight and loads, is undoubtedly very useful for operators, and we think customers will increasingly demand this from control systems in the future.”

With pendant controls now generally only used only as a back-up to wireless systems, Murray Chamberlain from Munck Cranes also concurs that increased data and communication between equipment is “definitely becoming more popular with end users”.

The drives and sensors from Magnetek-brand controls are said to constantly collect production information, which is then sent to a controller, PLC, or to a personal electronic device. This can be particularly helpful as it allows hoist operators to receive information in different parts of the factory floor, or in a different part of the production facility.

“Operators can access this information [collected from the drives] from their office and get analysis on wearable parts or machine downtime,” confirms Jim Kluck. “They can also have the data delivered as an email or text message.”

Comfort and increased ease-of-use for operators are two of the benefits being touted by HBC-radiomatic, a supplier of radio remote controls for cranes and machinery based in Germany, which has recently unveiled a number of technologies, including a completely renovated version of its Spectrum range of controllers.

“The new Spectrum 4 transmitter is the latest addition to the series,” says Oliver Meister, head of marketing at the company. “This unit is specially designed for the largest machinery and for use in demanding operating environments, and it continues the success of the brand, which has existed for more than 30 years.”

“The mobile solution allows operators to position the camera freely wherever they need it,” says Meister. “The operator is provided with a good view of the machine and working environment, even in areas with limited views or dead spots.”

The system is additionally claimed to remove the need for operators to walk long distances for surveillance tasks and machine control, as they can keep an eye on each task using the video display.

With five subsidiaries and a reported customer list of more than 40 long-term partners, the company reported strong sales last year. “We’re still seeing a growing demand for high-quality radio remote controls throughout the most diverse industries, and HBC-radiomatic is continuously opening up new markets and new fields of applications,” notes Meister.

Meanwhile, fellow German radio controls specialist NBB has also recently launched the latest version of its PocketEvo push button transmitter for overhead cranes. The revamped control system has already been installed at a number of cranes users, which have been testing the product over the last few months.

“So far, we have a handful of installations around the world,” confirms Marcel Bredow, business development manager at the company, who adds that the modular design of the product is a key benefit.

“The system features a patented magnetic push button that is surface mounted, so that it can easily be replaced by the user if there’s a fault, with no need to open the case. It additionally has a CDC Key that can quickly be replaced if there’s a problem.

“The technology behind the button is revolutionary, and we are able to offer four different configurations of the push buttons: 1-step, 2-step, 3-step and proportional.”

The PocketEvo range, which features a shock resistant rubber case and IP65 resistance against dust and water, is suitable for a broad range of applications, including with permanently-installed overhead cranes, as well as harsh environments such as the steel manufacturing industry.

Tele Radio says that its radio-based control systems for cranes can simplify and streamline operations by reducing the amount of devices in a production environment that are liable to fail. 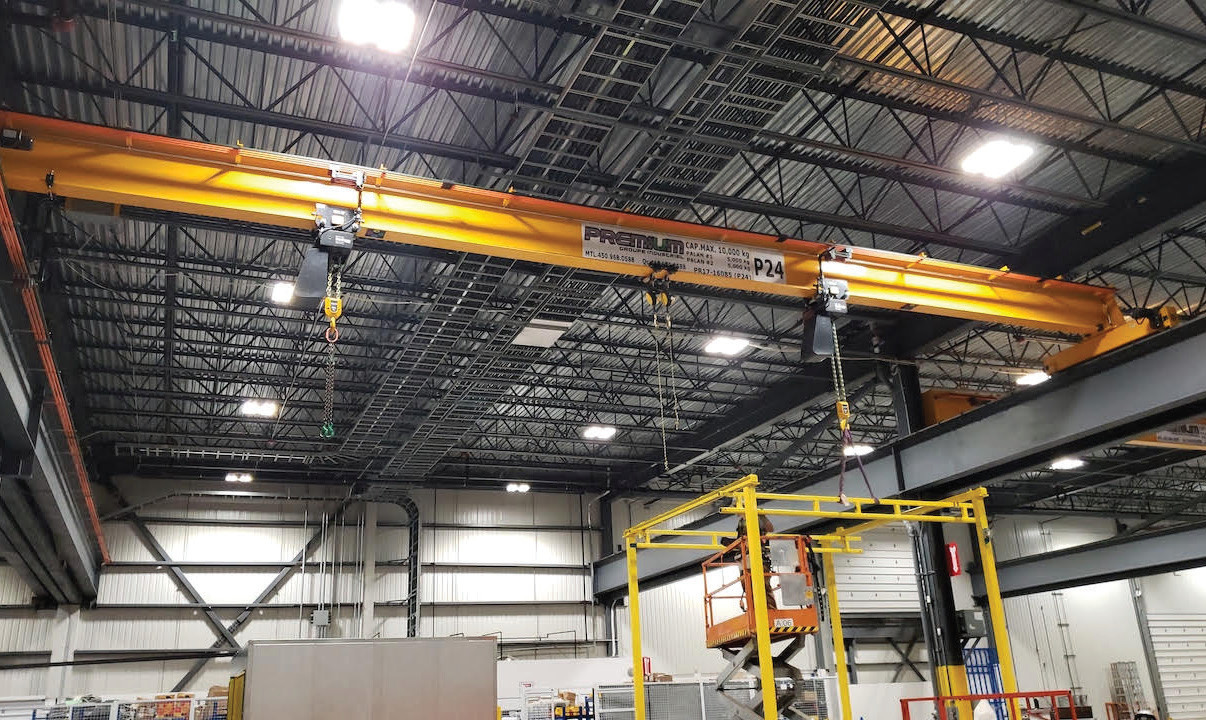 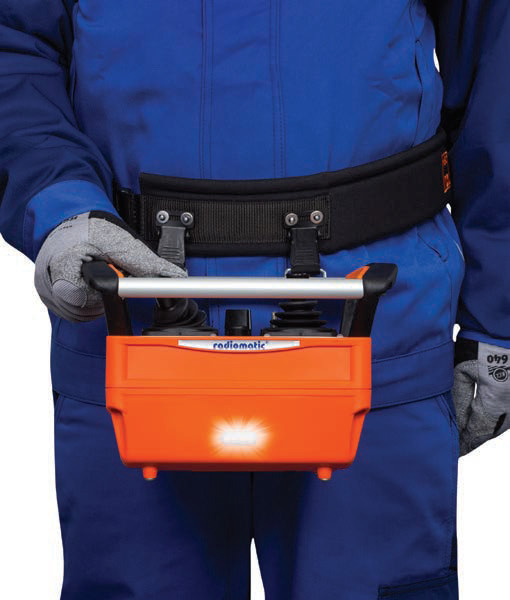 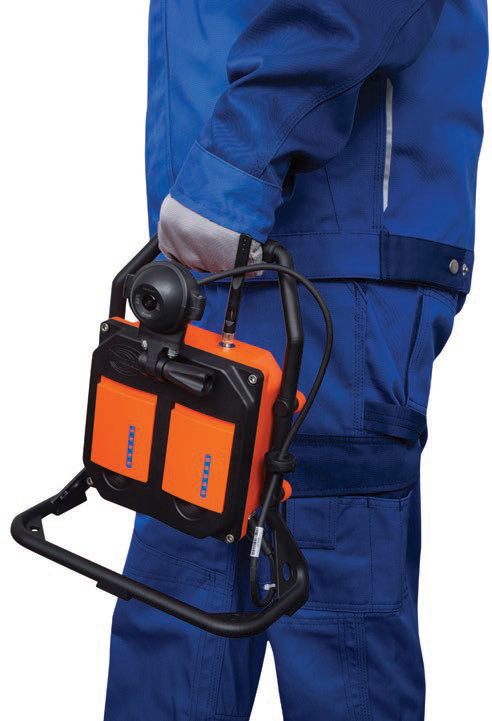 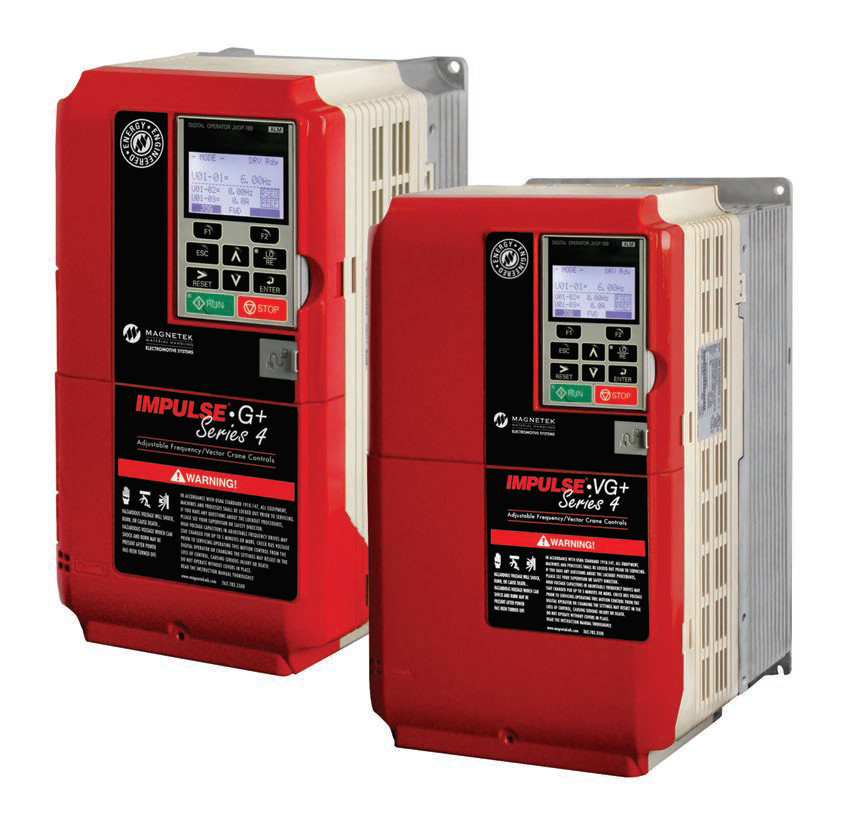 Drives and sensors from Magnetek-brand controls—including its Impulse series—constantly collect production information, which is then sent to a controller, PLC, or to a personal electronic device.