The economies of the EU’s eastern member states are experiencing rapid growth, as confirmed by representatives of the region’s local factory crane sector. This said, with Central-Eastern European economies showing the first symptoms of an incoming slowdown, company representatives caution against excessive optimism in the coming years, and point to the factory crane sector’s dependence on the region’s automotive and steel industries.

Industry growth data from Poland, Romania, and the Czech Republic, three of the region’s countries with the largest populations suggests that, while many of the countries’ industries are still reporting solid growth, their performance is below expectations from not long ago.

In Poland, industrial production rose by 5.8% in July 2019, according to the latest available figures from the state-run Statistics Poland agency. This, however, was lower than the performance expected by local analysts.

Robert Höfler, vice president for the industrial cranes segment within the EMEA region at Konecranes, told Hoist that the Central-Eastern European markets represent an increasingly valuable sales region for the manufacturer. The business operates its offshoots in a number of countries across the region, including Poland, Romania, the Czech Republic, Slovakia, Hungary, Slovenia, and the three Baltic States, comprising Lithuania, Latvia, and Estonia. Konecranes offers the entirety of its product portfolio for industry applications in these markets, consisting of overhead traveling cranes, light crane systems, hoists and other lifting equipment and services, according to the company’s vice president.

“The Eastern European markets have been fairly stable so far and rather independent from the slowdown in Germany. The Czech Republic and Slovakia are mainly driven by the automotive sector, and there the situation for our market was better than elsewhere, but a certain slowdown has become visible,” Höfler said. “Our business in Poland is very much driven by foreign direct investments into the machinery and manufacturing industry and is still very solid. Also in Romania the business is driven by foreign investments and is still the most dynamic in the region, especially as Romania was the last country that benefited from the latest economic growth period.”

Asked about the main types of products that the company been supplying to the region, and the technologies customers are requesting and using for their investments, Höfler said that Konecranes has observed a rising demand for more high-end solutions from its Eastern European industry customers.

“In most of the countries the trend goes also more and more from basic lifting equipment demand to more sophisticated solutions, such as assistance systems, semi- and full automation,” Höfler said.

This said, one of the negative trends that could exert excessive impact on the region’s markets is the industries’ excessive dependency on one industry branch that seems to dominate other manufacturing sectors, according to Konecranes’s vice president.

“The strong dependency on the automotive industry is a risk [factor] for all these markets,” Höfler said.

The company representative’s observation is confirmed by the findings of European consultancies. An analysis by the London-based HLB states that, over the past years, “the automotive industry has been booming in the Central and Eastern European (CEE) region. Increasing numbers of car manufacturers decide to establish their modern and state-of-theart production sites in CEE countries, due to the competitive edge the region has over Western European countries. Since increased political consolidation and economic development, the region has enjoyed increased attention from investors, as they consider the region one joined-up sourcing, manufacturing and logistics hub.”

The presence of plants operated by major OEMs, such as Volkswagen, FIAT, Toyota, Mercedes-Benz, Jaguar Land Rover, Hyundai, and KIA, among others, and leading automotive suppliers is a major contributor to the region’s gross domestic product (GDP). In 2017, the automotive industry was responsible for as much as 8% of Poland’s GDP, as well as 13% of the country’s export sales. It was also responsible for providing jobs to about 10% of all those employed at industrial jobs in the Polish market, as indicated by figures from a report commissioned by the staterun Industrial Development Agency.

Garbiñe Guerra, marketing director at GH Cranes & Components, told Hoist that the conditions for the sale of overhead cranes are currently beneficial in Poland, as well as in a number of other markets of the region, including the Czech Republic, Slovakia, and Hungary.

“The positive economic growth in these countries, the increase in the export needs on the Western European markets, and the high internal demand combined with the availability of European Union funding result with a high level of investment in the expansion of existing private sector plants and, consequently, high demand for hoisting equipment,” Guerra said. “This trend is particularly visible in production companies manufacturing steel products: tanks, containers, machines, especially agricultural machinery, and wagons.”

The Spanish company’s subsidiary GH Polska provides both standard gantries, which are mainly supplied to the market related to the distribution and processing of steel and concrete, as well as special gantries adapted to the needs of its customers, “especially where automation of production processes, high precision of equipment operation and solutions related to high work safety are required,” Guerra said.

This year, the company has observed a high interest in overhead cranes in the steel mills and distribution sector in spite of the fact that the development prospects of this product segment are weakened by “a clear downward trend in road construction.”

“Another industry with high development potential is the aviation and aeronautical industry, where aviation market leaders, owing to their access to educated engineering staff and low costs, are increasingly locating their factories, service centres, and test centres in Central-Eastern Europe. It is also worth mentioning that there has been a high level of investments made in recent years in this region’s automotive industry whose prospects are still stable and will continue to generate the demand for overhead cranes.”

Some of the latest major projects carried out by the Polish subsidiary include the following contracts: the supply of overhead cranes for a steel distribution centre fitted with the anti-sway system, which was designed to accelerate the loading of trucks, to local steel maker Konsorcjum Stali; automatic cranes enabled to handle the combustion process of waste and rubbish to Polish cement producer Cementownia Warta; and overhead traveling cranes with a security system, used to disable a work zone in the event of an unwanted worker entering the zone, supplied to Italian automotive parts specialist Magneti Marelli. Based in Brno, in the Czech Republic’s south-eastern region, Axima has been involved in the country’s industrial automation industry since 1991. The company has three specialised divisions: electrical wholesale, battery chargers, and power supplies production, and an automation and electromagnetic systems division.

In 1997, Axima set up a subsidiary in Košeca, in Slovakia’s north-western part. Since 2007, the business has manufactured and assembled its own switchboards. Another development of the company’s capacities came in 2011, when Axima launched a new facility to make switchboards in Brno. In 2013, the Czech business finalised the reconstruction of its first production hall and office facilities in Zastávka, and a year later, the manufacturer completed the construction of a new warehouse in Jihlava. In 2019, Axima completed a new facility for its sales department and headquarters in Brno.

Libor Kafka, the director for automation at Axima, told Hoist that the company’s sales dynamic over the past years is the basis of a positive outlook for the years to come.

Kafka said he was particularly enthusiastic about projects related to modernisation and upgrades of existing industrial cranes:

“In our market, there are a lot of crane end users who decide either [to acquire] a brand new crane including magnet power supply or a new magnet power supply installed on existing cranes. Very often, we deliver a brand new MACO power supply system to replace an old MACO power supply system that we delivered several years earlier. Our present MACO magnet controllers consist of a number of new features and technologies, for example, they include remote access in Internet network for monitoring collects condition, usage and operating data from control systems.”

Asked about the main factors that could impact on the demand in the Central- Eastern European markets, Kafka said that, while it was difficult to name them, industrial issues were “important”, and that, if the forecast for the region’s steel industry was to become gloomy, local customers could decide to postpone the implementation of industrial projects to modernise their lifting equipment and cranes.

Asked the same question, Guerra points to the “economic and industrial situation in Germany as the main partner and importer from the markets of Central and Eastern Europe, as well as the situation related to internal demand for investment goods”, while also emphasising the worrying performance of Europe’s steel industry and its potential negative impact on the factory crane sector:

“At present, the general European tendency, especially in the steel market, is not good, and there is also a clear downward trend in the Polish market in road construction, and in [a long-term] perspective, there is also a decline in construction investments in the public sector. These aspects will have a significant impact on the metallurgy and steel distribution and prefabricated concrete market,” the marketing director said. “In spite of this, the development of the private sector will remain the driving force of crane sales, especially where we will have to deal with highly specialised production, where access to EU funding, high internal demand and growing export will be the main drivers of production and sales development.” 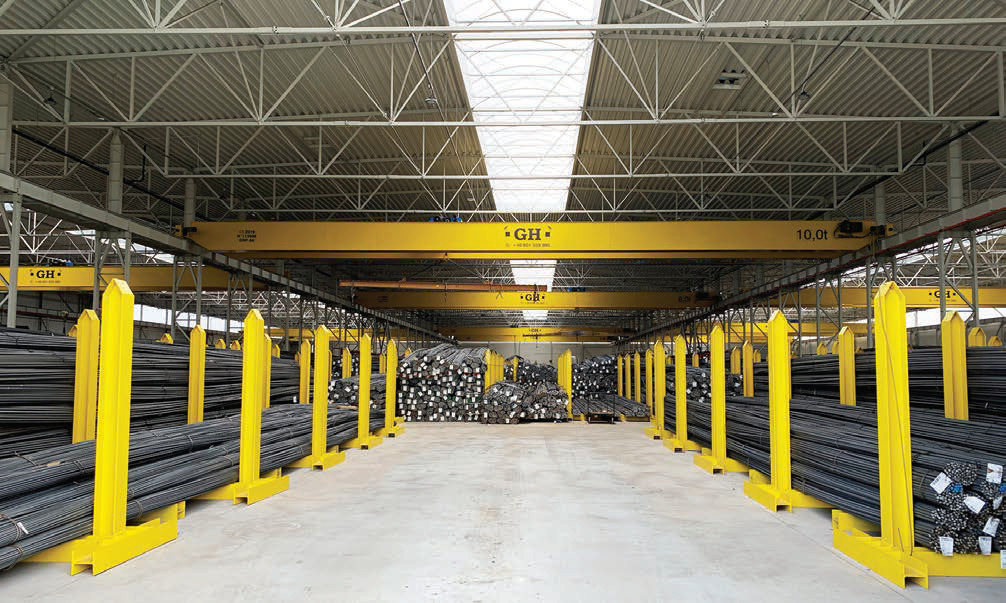 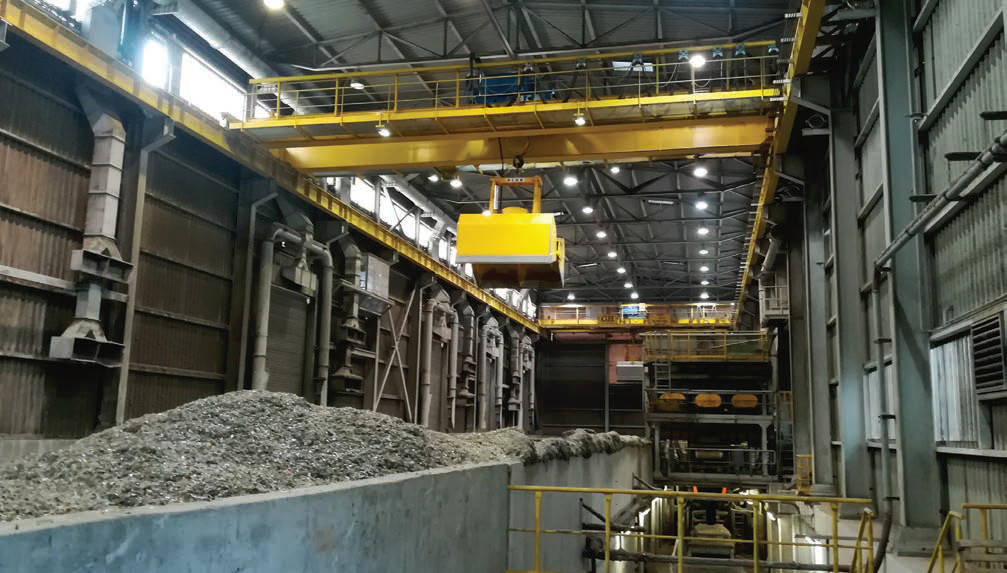 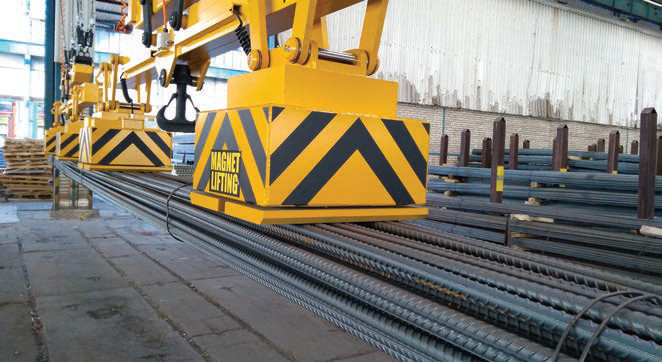 Axima delivered a new crane including an electromagnetic system for rebar bundles handling to a customer in Slovakia. 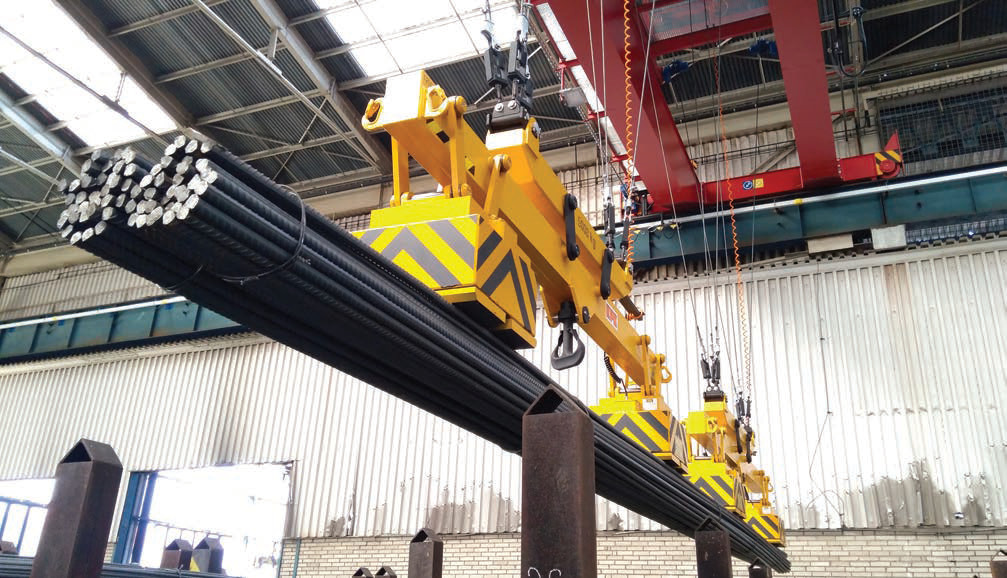 Axima is eyeing growth in the Czech Republic, Slovakia and the Polish market.