Gantry cranes for use at ports are getting makeovers, with new units and retrofitted existing cranes being fitted with automation capability, as well as safety and efficiency upgrades. Daniel Searle reports.

Finland-based crane manufacturing giant Konecranes has worked with Fluidmesh Networks—a specialist in wireless systems for security and industrial applications—to devise the first fullywireless automated rubber-tyred gantry (ARTG) crane, say the companies. The companies successfully carried out proof-of-concept testing of the system, which will allow container terminal operators to use remote control and automation with RTGs in the container yard without the need for fibre or cable spools, thereby saving cost and time.

“Many of the newest and largest container terminals have been adopting some level of automation and support for remote operations: from ship-toshore cranes, to horizontal transport, to automated stacking cranes,” says Konecranes. “However, this has not been the case for RTGs, which are widely used in container terminals around the world. Much of the world’s RTG fleet is diesel-powered, and there have been limited options for automating RTGs given the fact that running cables to them is costly and often impractical.”

The automation capability for RTGs is part of Konecranes’s ARTG 2.0 system update, which was in development for over two years, including thousands of hours of field testing, says the manufacturer. The results of the testing show that the system—which uses Fluidmesh MPLSbased wireless technology for low latency and high throughput to the RTGs for control and live-video data—provides over 99.95% uptime in real working conditions.

“We are thrilled to have been given the opportunity to work with a leader like Konecranes and contribute to a system that helps container terminal operators around the world to embrace automation and drive the productivity of their RTGs,” says Cosimo Malesci, Fluidmesh co-founder and EVP of sales and marketing. “Our wireless MPLSbased technology has been proven in many vehicle automation systems around the world where 802.11 WiFi or LTE haven’t been able to deliver. Our focus on seamless roaming, extremely low latency and high throughput wireless networks to drive productivity, safety, and security continues to pay off.”

“We have been impressed by Fluidmesh Wireless MPLS technology since day one,” says Sampo Pihkala, chief system engineer ARTG at Konecranes. “We have been testing many different wireless technologies for crane operations over the last decade and the throughput and reliability delivered by Fluidmesh is unparalleled.”

Konecranes has now completed the upgraded installation of its Auto-TOS (Terminal Operating System) smart feature on the cranes, which allows the crane to accurately report its position to the TOS after every container move. The system therefore receives live data on the position of every container, enabling the terminal operator to maintain a fully-accurate container inventory.

Konecranes has already installed more than 35 of the systems on non-Konecranes cranes at the terminal, and more than 1,000 retrofits worldwide.

Chinthaka Abeynaike, IT general manager at SAGT, says: “Data is increasingly becoming a key differentiator for our business. By adding this Konecranes technology to our entire RTG fleet we have dramatically improved our live-feed visibility over the yard.”

“From smart features up to full automation, the path can include supervised operation and remote operation to smoothly introduce the power of automation,” says Shi. “The path to port automation applies to all container handling equipment brands. Full automation can be the final goal, but it doesn’t have to be. Flexibility is the key.”

And at the Port of Boston, Konecranes USA retrofitted its RTG cranes with some of the company’s latest technology, including Drive and Control System, and Smart Feature retrofits.

The Port of Boston is owned and operated by the Massachusetts Port Authority (Massport), and helps to connect more than 2,500 businesses to the global economy, supporting 9,000 direct jobs.

Massport operates a fleet of 16 Konecranes RTGs at Conley Container Terminal at the port, with some of them having been in operation since 2007. Some of the old crane control systems rely on technology including contactors, relays, thyristor DC drives and frequency converter AC drives which are technically and physically outdated, says Konecranes—with manufacturers of such systems no longer providing spare parts and technical support for the obsolete components. The first stage was in 2018, when Konecranes retrofitted five of the older RTGs with its latest technology, improving functionality and fuel efficiency.

“The aim was to cost-effectively boost the safety, efficiency, and productivity of Massport’s RTG fleet by utilising the latest technologies,” said Scott Lane, vice president, port services, Konecranes USA. The Drive and Control systems retrofit enhanced functionality to that of modern cranes, while minimising costs by keeping the cranes’ steel structures and main components, which have many years more life.

The new features included: newgeneration D2V inverters for better functionality and technical and spare part support; a new Crane Management System (CMS) to improve crane reliability by providing more information on how the crane is working, making diagnostics and troubleshooting easier—an optional CMS server can transmit this information directly from the crane CMS to a technical office via Wi-Fi; an operator touch panel with a faster response time and more intuitive interface; an upgraded PLC, again reducing response time and providing better technical support; and Konecranes’s Truconnect remote service which enable the crane manufacturer’s team of engineers to analyse the condition of the crane remotely, speeding up troubleshooting.

“The cranes are running more smoothly, consuming less diesel fuel, and are quieter during operation. From our real-time reports, we can see an increase in uptime and a reduction in unexpected breakdowns at Massport,” says Lane.

The retrofitted RTGs also have improved fuel consumption due to a new variable speed diesel engine installed by Konecranes, which adjusts the engine’s speed based on the output required. BURGEONING ORDER BOOK

The 600-hectare Freight Village Vorsino was established in 2012 and is part of the Vorsino Industrial Park. It has access to road, rail and air infrastructure and includes a high-performance intermodal terminal. The two new cranes are part of expansion plans for the intermodal terminal that will see capacity rise to over 500,000 TEU per year. The RMGs have a span of 32m, a lift height over rail of 12.5m, and cantilevers of 8m and 9.7m respectively. They are both fitted with a rotating machinery trolley, and have safe working loads of 45t.

Designed and manufactured by Liebherr Container Cranes in Ireland, will ship in large pre-assembled components to St Petersburg, before being transported by road for assembly and commissioning at the Freight Village.

As with all Liebherr yard cranes, productivity is enhanced by the company’s eight rope reeving no-sway system and simultaneous motion of all drives, says Liebherr. The use of high tensile steel and a lattice main bomb results in a light crane with a low centre of gravity, improving stability. Declan O’Sullivan, Liebherr Container Cranes area sales manager for the region, said: “We are delighted to work with Freight Village Vorsino to help deliver on their expansion plans. Liebherr’s Container Cranes Ltd expertise and track record, coupled with Liebherr Russia’s extensive product knowledge and first-class local service capabilities combined to provide Fright Village with the optimum solution for their expansion plans. We look forward to delivering the cranes and seeing them in operation in due course.”

Liebherr Container Cranes also received an order from Termont Montreal, for one ship-to-shore (STS) container crane and one rail-mounted gantry (RMG) crane, for use at Termont’s Viau Terminal.

The terminal opened in 2016 and quickly reached full capacity; the new Liebherr equipment will help the terminal increase its capacity to 600,000 Twenty-foot Equivalent United containers (TEU) and to maximise container handling potential on the Island of Montreal. The cranes will join five Liebherr STS cranes and 11 Liebherr RTGs already in operation at Termont Montreal.

The STS ordered is a twin-lift model, identical to previously supplied cranes, and features an outreach of 48m, a backreach of 15.24m, a span of 18.29m and a lift height over rail of 33.5m.

The RMG, Liebherr’s first RMG sale in Canada, has a safe working load of 65t under twin-lift spreader. It has a span of 36.6m, a lift height over rail of 18.5m, and a single cantilever of 17m. The system will stack containers 1-over-5 high, and during quieter periods will carry out fully-automatic stack housekeeping; although the RMG can also be controlled via a remote operator. To help comply with environmental conditions at the port, the RMG features a quiet machinery trolley with extensive sound-dampening features.

A further order for Liebherr Container Cranes has come from Montecon S.A, who ordered two large electric RTGs for their operations at the Port of Montevideo, Uruguay. Due to be delivered in early 2021, they will represent that first Liebherr RTGs in Uruguay; the cranes will stack ten containers and a truck lane wide, and 1-over-6 containers high.

The cranes will incorporate various cuttingedge technology, including BTG autosteering; stack and gantry anti-collision; and a truck anti-lift system—this will complement the port’s drive to use advanced technologies such as blockchain, with efforts in process to integrate 5G and process automation. The cranes will also offer an active front end (AFE) and a CRD electric power supply, which will eliminate emissions and reduce fuel consumption and noise. Embedded fibre communications and Liebherr’s open architecture are designed to ensure efficient communications as well as futureproofing the machines.

In Vietnam, Konecranes has received a further order from Ben Nghe Port, for two Boxhunter RTG cranes, due to be delivered in April 2021.

The port, located centrally on the Saigon River in Ho Chi Minh City, has been operating two Boxhunter RTGs since 2017, serving both domestic and international container traffic.

The cranes will be fully-electric 16-wheel systems, powered by cable reel. They will stack 1-over-5 containers high with an operating width of six containers plus truck lane, and will be equipped with GPS-based auto-steering and Truconnect remote support.

Dang Hoai Giang, chairman of the board of Ben Nghe Port, says: “The Boxhunter RTG has met our expectations and we look forward to receiving two more and putting them into service. Konecranes has supported us well. Acquiring two more Boxhunters was an easy decision.”

In South America, Kalmar, part of Cargotec, will supply Klabin—Brazil’s largest producer and exporter of packaging paper— with three Kalmar Zero Emission RTGs. The order, which also incorporates Kalmar SmartPort solutions, is due to be delivered in the second quarter of 2021. Klabin is Brazil’s leading producer of papers and paperboard for packaging, industrial bags, and corrugated board packaging, as well as producing hardwood, softwood and fluff pulp. One of the RTGs will serve the rail yard, with the other two operating in the container terminal yard at Klabin’s new integrated pulp and paper production facility which is currently under construction in Ortigueira City, in the South Region of Brazil.

The RTGs will be equipped with the Kalmar SmartFleet remote monitoring system, which allows the operator to manage, troubleshoot and analyse the status, productivity and maintenance needs of the cranes. They will also incorporate Kalmar SmartRail, an automated gantry steering system that improves safety and operator performance by allowing the operator to concentrate fully on picking and placing containers.

As Zero Emission models, the RTGs feature a fully electric power system that produces no emissions or engine noise at source, and eliminates the need for hydraulic oil, and has a simplified design that requires less maintenance than a diesel-powered RTG.

Sergio Morales, logistic project coordinator at Klabin said: “We are constantly working on solutions that improve our operational efficiency with responsibility and sustainability. The new terminal yard will be a completely new operation for us, so we are pleased to have the support of Kalmar in this project since they are a world leader in eco-efficient container handling solutions and services. The zero-emission cranes will bring a minimum operational cost and play a vital role in our effort to create a sustainable logistics process.” 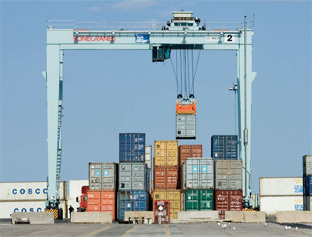 Konecranes USA retrofitted its RTG cranes at the Port of Boston with its latest control and smart features. 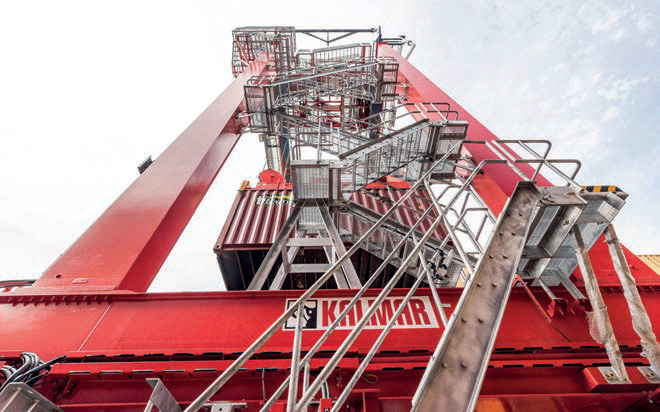 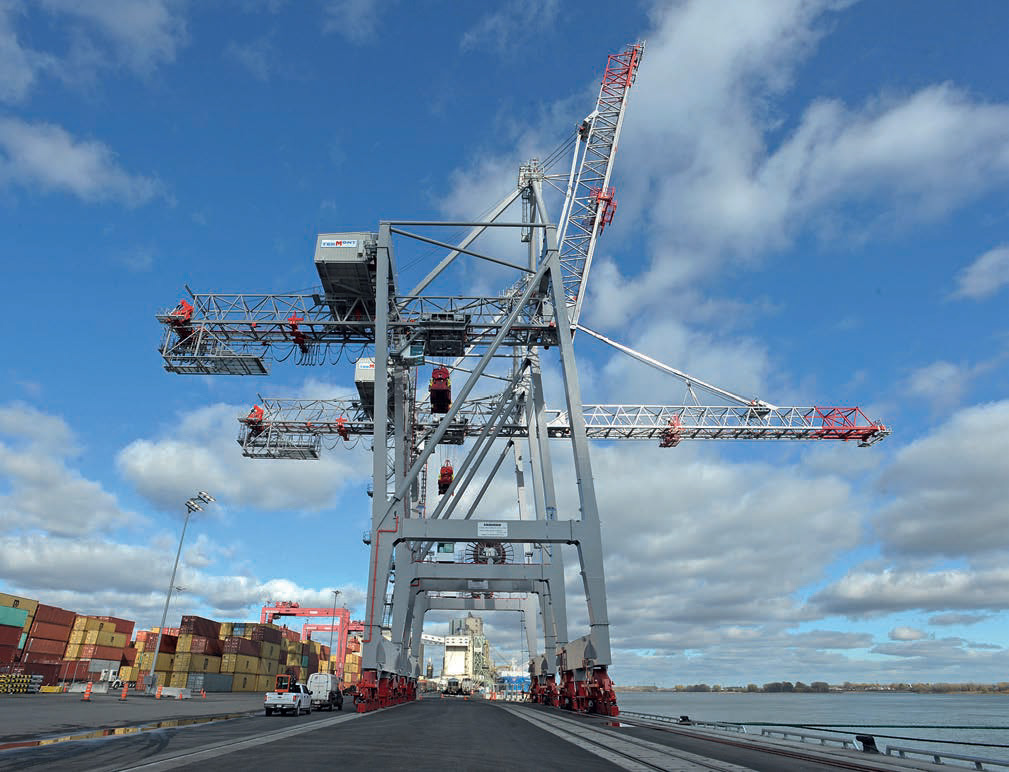 Liebherr will supply one rail-mounted gantry crane and a ship-to-shore crane to Termont Montreal in Canada.