KEEP ON TRACK AND ON TIME

Radio frequency identification is helping hoist operators to keep track of their equipment and on top of inspection schedules. Sally Spencer reports

Around the world, regulations and standards demanding regular inspection of lifting equipment present equipment owners with the challenge of keeping track of all their equipment as it moves in and out of storage and between locations Some companies use colour coded tags to help them keep track of individual pieces of equipment and their inspection dates but RFID tagging is now gaining traction within the market.

CoreRFID managing director Munzi Ali says that, while the technology has been available for several years now, the real increase in demand has been relatively recent. "The lifting industry has been quite slow to adopt the technology but in the last 18 months we've seen demand increase. We've just sold 110,000 RFID tags to a lifting company for attaching to hoists and other items."

The advantages of RFID over more conventional tagging are clear, he said. ID numbers on traditional tags can wear off over time and can be difficult to read. And if the ID is incorrectly logged it can lead to duplication.

Tom Bamford, vice-president of channel sales at InfoChip (which has merged with Holland RFID) agrees that the problem of duplication can be eradicated with RFID.

"RFID can track the untrackable, including difficult to identify hardware. The technology avoids data re-entry and provides a digital footprint for each interaction, including inspections and inventory movement."

"It makes life easier regarding identification," added a spokesman from RUD's Ketten Rieger & Dietz lifting and lashing department. "With the help of a suitable system you can manage your entire lifting equipment (and other) inventory very easily and assign it to a certain location or department, which helps the inspectors or safety engineers." The lifting industry has adopted "passive" RFID, said Bamford, meaning that it is activated by a radio frequency from a nearby reader.

"This reader is typically a rugged handheld device, Android device or wireless Bluetooth reader and users must be in close proximity to the chip as they don't include a built-in power source," said Bamford. "Passive RFID is also intrinsically safe for hazardous zones."

Another reason for needing to be in close proximity is to avoid scanning other nearby items by mistake. "The operator has to be within about 2cms," said Ali.

Methods of attachment of RFID tags differ. RUD is one of the few companies that embeds, or presses, the RFID transponder (chip) into products, for example.

"Lost tags are a daily occurrence for companies so we try to achieve a longlasting solution for identification," said RUD's spokesman.

"The second step is to bring it into an administration system (RUD products are already included in the RUD-ID-Net) and save it as inventory," he added.

"You can assign your own additional information to the component and tell the system your inspection cycle. When it is time for the next inspection an email reminder pops up and tells you where, what and when."

The fixing method for CoreRFID's tags depends on the environment the hoist is being used in and customer preference. It offers a choice of 3M adhesive, a wire cable or a rivet. "Obviously if we're using a rivet we work closely with the manufacturer to makes sure the surface isn't weakened by making a hole in it," said Ali.

"As soon as the operator scans the piece of kit he gets details of that item and the history of when it was last inspected. It will also show any comments the inspector made on the previous inspection. All the details get stored on the handheld reader and then every hour - or whatever time interval the client wants - that handheld 'talks' to the cloud database and transfers the information across."

The cloud sits within a third party company, which guarantees 24-hour uptime. Clients who wish to host their own databases are welcome to do so, however. "We're more than happy to work with them on that basis as well," said Ali.

InfoChip has a variety of RFID attachment solutions, in line with the broad range of applications it caters for.

Its embeddable DuraPlug chips are flush with the surface often found in shackles and hoist rings, and acrylic adhesive DuraDisc chips stick to recessed areas on products such as plate clamps. Meanwhile, metal-reinforced drop chips hang from chain and wire rope slings. Whatever the fixing method, the tags have one thing in common - durability.

"They often outlast the lifting product," said Bamford, adding that InfoChip encourages its clients to recycle RFID chips to new products when possible. CoreRFID says its tags are guaranteed for 25 years on the data side and for 500,000 read/write actions. They are designed to withstand a temperature range of -20 to +60°C and, said Ali, the company has "never come across an occasion where we've had to replace one".

RUD says it has tested its transponders in the harshest environments of the offshore, mining and forging industries and in Arctic regions, simulating 10 years service. "We tested the embedded transponder from -60 to +270°C and they were still readable," said RUD's spokesman.

Latest developments for RUD include RUD-Better-Check, a new USB RFID reader that allows reading at greater distances (up to 2cm for RUD RFID transponders drilled into metal). And the company says it is still improving its RUD ID System by adding new and customised functions.

InfoChip is also pushing its technology. "As well as pushing down the size of RFID tags to the quarter inch scale, InfoChip is now showcasing long-range RFID," said Bamford. "Ultra high frequency tags are available for lifting gear offering read ranges of up to 30 feet. This standard is also compatible with pre-existing UHF infrastructure at many end users," he added. Core's Ali points to developments in the readers as well as the tags.

"Traditionally RFID readers are bulky, outdated handhelds, but over the last 6-12 months we've found more and more wellknown manufacturers including RFID readers on their devices. So now you can have tablets as well as PDAs with built-in RFID readers. "And on the operating side it was all based on Android but now there are more readers available that will work with Android, Windows or Apple," said Ali. "Six or seven years ago we'd have to say to a client 'it's this device or nothing' but now we can give them 20 different options and they can choose the one that fits their requirements.

"We've just deployed a system where the client wanted a tablet reader because the operators need access to email as well as being able to do the inspection. It makes sense to use one device rather than have to carry four or five."

Ali added that devices that feature a built-in camera are also increasingly popular, enabling the operator to make a visual record of any damage to the lifting equipment.

As the adoption of smartphone and tablet readers continues to grow, the need to buy a $2,500 scanner diminishes, said Bamford. The chips average under $2 each and the software is licensed as a subscription, thus avoiding upfront capital costs.

For RUD, if the client is a user of RUD products, the transponders are included in the price but if they're retrofitted on other manufacturers' components they can choose from "a wide range of different transponder types with a cost factor of only a few euros", said RUD's spokesman.

"The use of our ID-Net database is basically free of charge," he added. "We only charge a small fee for the storage of data on the cloud."

The investment in bone fide RFID technology may already be small, but even the typical £1 per tag cost can be undercut by as much as 80 per cent but then it's definitely a case of caveat emptor, according to Ali.

"You can buy counterfeit tags for about 20p but then you run the risk of replicas and duplicate IDs," he said.

And counterfeit tags simply don't do the job that's required.

"The best products are always faced with counterfeits," said RUD's spokesman, "but people who really know us and share a long and positive experience with us appreciate our quality."

Market growth is led by the construction, oil and gas industries where, said Bamford, a major focus on safety has embraced the benefits RFID can bring. While InfoChip supports customers worldwide, international growth typically stems from "energy-rich marketplaces including the North Sea region, Brazil and Australia".

"Several of our largest users are overseas, demanding high-speed server performance and support," added Bamford. CoreRFID's Ali cited the aviation sector as another growth area and said that while the company has clients in the US and in Australia, its main focus of activity is in the UK, Ireland and Europe.

RUD is also enjoying a growing market throughout Europe where, it says, safety considerations and regulations governing inspections are becoming stricter.

"Safety engineers keep an eye on their inventory very carefully because accidents might be avoided," said RUD's spokesman. Operating RFID tracking systems is pretty straightforward say the suppliers, who offer training as matter of course. "We offer different kinds of training to retrofit components and to handle the IT solution as a service to our customers," said RUD's spokesman.

InfoChip says its system is intuitive and designed for lifting industry technicians "who manage equipment all day". Most training is managed via web conference, although the company also hosts regular, free training at its Houston, Texas office 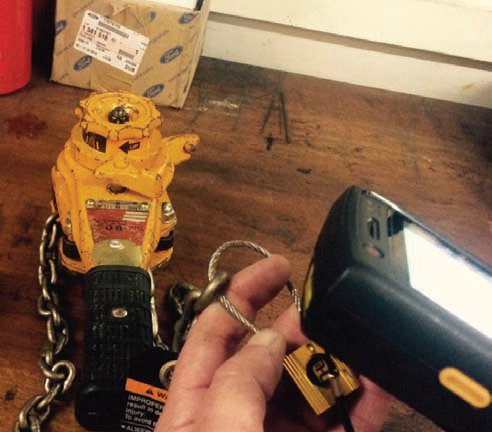 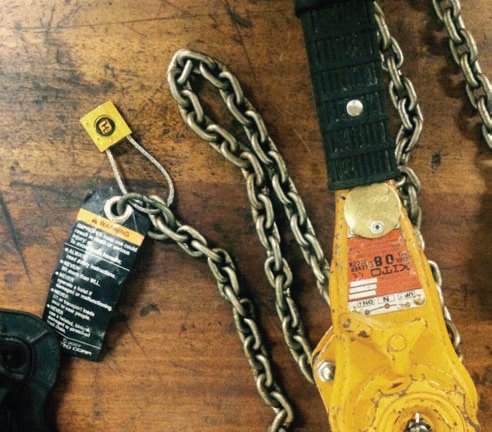