Innovations on show at UK’s liftex

The LiftEx trade show took place in Milton Keynes, UK towards the end of 2018, with a host of innovations on show. Daniel Searle attended the event.

Taking place over two days in November and incorporating the inaugural industry awards of show organiser LEEA, LiftEx 2018 was the key event in the UK lifting industry. As ever, companies from the UK and around the world attended the event, showcasing recent developments and discussing their business.

Dynamic Load Monitoring (DLM) promoted its recently-launched TW-3.0 range of wireless electronic sensors, suitable for integration into load cells, encoders, proximity sensors and other applications. The system, which features a large, high-quality LCD display, can be paired with up to 12 sensors and operate at distances of more to 800m away. Each sensor can be given a customised name to allow easy identification, and the system is compatible with any DLMmanufactured load cells.

Lifting Products is a distributor of Haacon products in the UK, having taken over the manufacturer’s UK account two years ago. Since then the company has more than quadrupled turnover, says managing director James Porter, including an increase of exports to the US.

End users of the Haacon winches and jacks include the military, for use with aircraft, and container lifting in applications where there is no power available. The premium products supplied by the manufacturer are based on a standard product range, but can be adapted and customised to suit specific applications. Business has been positive partly because the company operates in a specialist industry, says Porter, which is not affected by the general market.

Durham Lifting has standardised its range of modular lifting beams under the name Multi-Sec, available with lifting capacities of 13–250t, in a wide range of spans and with other sizes available on request.

The beams provide a cost-effective and versatile solution, said marketing manager Deborah Cunningham, with the assemblies able to be configured into virtually any lifting rig, to enable complex structures to be lifted.

The company designs and manufactures crane systems for specific operations, covering heavy or light duty, indoor or outdoor use, and low headroom applications. It has a network of crane and hoist service engineers to provide a range of services, maintenance, and repair work.

Durham Lifting also offers static and dynamic load testing of structures, as well as components, parts and products, covering load capacities from a few kilos through to thousands of tonnes. Testing can be carried out in-house on the company’s 2000t test bed—the largest of its kind in the UK, says Cunningham—or on-site using test weights, water bags and hydraulic systems.

Netherlands-based Ad. A. Klein Transporttechniek has the European rights to distribute Hitachi electric chain hoists and attended LiftEx looking to expand its own network of resellers in the UK, from two to at least five, says account manager Tinus Kaffa.

The company receives the hoist bodies from Hitachi in Japan and prepare them with the chains, before shipment to customers—which takes around 48 hours for customers in the UK. The hoists are available with capacities from 250kg to 5t, and the company also distributes Hitachi trolleys for cranes. Business is getting busier, says Kaffa—while the company’s focus is on quality, service, and optimised delivery times.

Wetherby-based Cabletrail, a manufacturer of tags for slings, have moved to a larger facility incorporating offices, a warehouse, and a new laser unit—the company’s second—for printing bespoke tags and increasing capacity.

The move was geared around improving delivery, says managing director Nigel Myers, allowing more product to be stored on-site and orders to be turned around more quickly, as well as the location of the new site offering improved transport links. It was also inspired by 40% year-on-year increases in business over the last two years, adds Myers.

The company was founded four years ago and one of its key advantages is the plastic moulding business owned by one of the company’s partners, enabling Cabletrail to control the whole production process, again helping to optimise delivery times and also allowing the company to handle bespoke requests.

Cabletrail does offer an RFID version of its tags, which was developed three years ago and recently patented, although it is only the larger companies that are currently using the technology, says Myers, noting that the technology requires a larger investment than conventional tags.

Globestock, a manufacturer of fall arrest systems, introduced a new addition to its portfolio with the launch of its davit, designed for loads or personnel. Rated up to 200kg for personnel and 250kg for load lifting, the davit has its winch and retrieval block on the same side of the mast, allowing the operator to keep away from the edge of the lifting area.

A range of accompanying sockets were also on show, including a floorbolted socket, a clamp for attaching the davit to surfaces such as a wall, and a prototype H-Socket system with outriggers.

Reid Lifting showcased the 1t-capacity model of its Porta-Gantry Rapide gantry crane, an addition to the range which includes existing models with capacities up to 500kg. The Porta-Gantry cranes are made of aluminium and can be carried and erected manually, with the 1t-capacity model weighing only a few kilos more than the 500kgcapacity version. No tools are required for erection, with the quick-assembly system using quick-release pins— making it suitable for fast deployment, and use in confined spaces.

Rated for personnel and goods, the new model is rated at 1t on all beam lengths, 2m, 3m and 4m, and also offers easily adjustable height.

Reid recently won its fourth Queen’s Award, says sales and marketing director Elisabeta Battersby—two of which have come for international trade, and two for innovation. The export business has been very good for the company, adds Battersby, accounting for just over half its business; the company has distributors in markets including France, the USA and Australia, and sells directly to end users across Europe and the Middle East.

The company supplies equipment for projects in sectors including cleanrooms, the nuclear industry, museums, the automotive sector, water and waste water—but one particular focus this year is the oil and gas industry, says Battersby, including a major project in Kazakhstan.

Luxembourg-based Codipro promoted its Gradup range of shackles and lifting points, made from a different steel that results in an increased working load. The company manufactures its products in Europe but sells globally, and maintains a stock of products to offer delivery within three days. Service for its products is provided through its distributor network.

William Hackett, the UK distributor for JPN Hoist, was showcasing the recentlylaunched dual-speed hoist, which enables a hoisting speed five times faster when not under load. Offering a capacity up to 30t, the hoists are suitable for applications with long falls and regular cycles, and have attracted a lot of interest, says Chris Wiggins, director for utilities at the company. 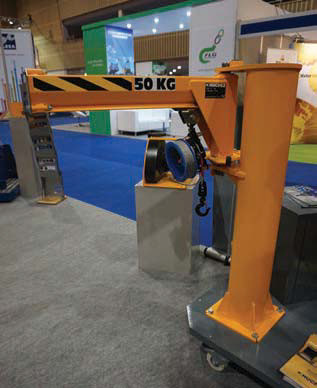 Atlas, the UK distributor of Francebased Huchez, displayed a range of Huchez equipment including this jib crane. 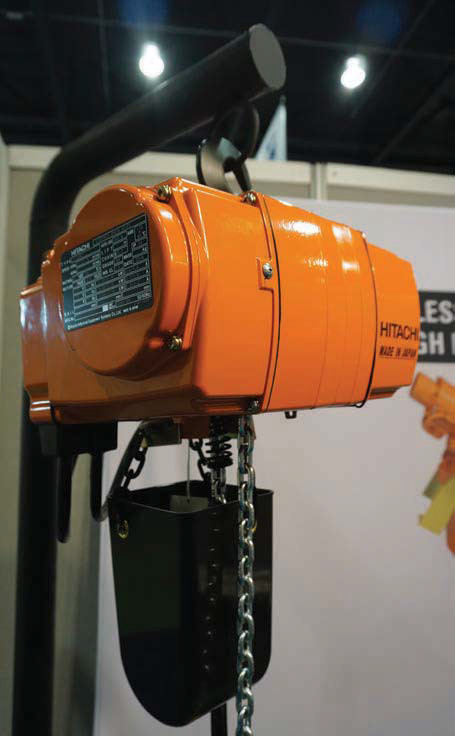 Ad. A. Klein, which has the European distribution rights for Hitachi electric chain hoists, is looking to expand its UK reseller network.