One container terminal operator last month enhanced its diagnostics and troubleshooting capabilities thanks to a Logix-based ethernet solution. A spokesman for Rockwell Automation explained.

DP World Southampton is the second largest container terminal in the UK. The terminal, which lies on the south coast of the UK, covers a site of 88ha. (0.88sq.km). It operates one short-sea berth and four deep-water berths, which can accommodate vessels up to 400m in length. The terminal operates more effectively when it has access to pertinent, real-time information relating to the operational effectiveness of its assets. It was this desire for information collation and delivery that prompted it to involve Cougar Automation and Rockwell Automation together in a project that would significantly help to enhance its crane to control room communications infrastructure.

The project was to cover a number of large cranes, positioned over a very large area, which are used to load / unload container vessels.

DP World already had an existing diagnostic-data-capture solution on these cranes, but they were not interlinked. Getting the information from the cranes to the central control facility was often tortuous and sometimes involved photographing HMI displays in order to yield data that was then hand-entered into reporting programmes later down the line.

"What we needed was a way of collecting the information and then delivering it in the most effective way possible to the central control room," said Brian Kelly, engineering manager for cranes and ancillaries at DP World in Southampton. "We also had to take into account the size of the site and the issues this would present with regards to the data transport infrastructure."

Each crane was already equipped with an Allen-Bradley SLC504 PLC coupled to local motors drives and HMIs using DH+. This solution was adequate for DP World's data capture needs, but it then needed a means of subsequently capturing this data and then transferring it to the central control location.

Simon Pape of Cougar Automation said, "We surveyed the project with Rockwell Automation and Routeco and developed a SCADA-based solution that could gather the data from the six cranes and then transmit it back to the control room. We were also able to duplicate the existing HMI visualisation on the remote SCADA, fostering instant familiarity with the new approach."

Very early on in the project it was determined that a wireless solution was the only sensible approach to a site this size. While DP World sourced and installed the wireless mesh, Cougar got to work with the Allen-Bradley based solution.

Each crane now has a ControlLogix Gateway, a four slot rack which houses DH+ and ethernet cards. In operations, the existing PLCs perform all the data capture operations before feeding the information to the Gateway using DH+. This information is then transmitted wirelessly to the control room via the ethernet card in the gateway. The control room houses a server PC running FactoryTalk View SE SCADA, FactoryTalk Historian and FactoryTalk Transaction Manager.

"We weren't changing any of the existing control or functionality," Kelly explained, "we just needed centralised data capture in order to monitor the cranes' operations in real time. Our cranes are very sophisticated; there is a lot of I/O on each unit. The data being collected was predominantly diagnostic information, pertaining to fault finding, alarms, operational shift data and hours run."

DP World now has a contemporary data capture and transmission infrastructure that is able to deliver realtime information in a recognisable format so that the site's engineers can make qualified, timely decisions, helping to maximise uptime and optimise the operating conditions. 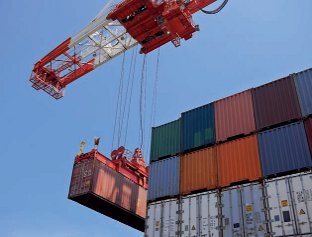 Each crane now has a ControlLogix Gateway 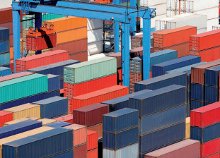