Germany: Tradition and growth in engineering

Germany, famous for engineering, is home for many key firms in the hoist and crane market. Adrian Greeman talks to some of them and asks how their business has performed in 2013.

Germany's long traditions of heavy engineering make it one of the main producers for crane hoists and equipment world wide. Today a string of well known names exists in the sector, such as Terex-Demag, Abus, Vetter, Liftket, Hadef, Stahl CraneSystems, Neuhaus and Kuli.

For just that reason says Stahl's support centre director Thomas Kraus "Germany is the toughest market in the world,both technically and pricewise."

"In the standard crane market especially the competition is really hard and you could even say that there is so some kind of a price war going on at the moment."

There is at least activity in the market, he tells Hoist magazine, with Germany, Austria and France all "quite OK". But the impact of the global economic crisis is still reverberating around Europe and "all the southern countries like Spain, Portugal, Italy, Greece are totally silent".

The main growth in the market is coming from abroad, meaning outside Europe he says.

Waiting position
An aspect affecting the German market is the recent federal elections says Edgar Bielinski, marketing manager at the family owned firm Kuli Hebezeuge based in Remscheid. "The market in Germany was in a waiting position, after the elections at the end of September. Germany is expecting a new government. The general economical situation for the crane branch is expected to improve and the prognosis shows positive developments and growth for next year.

One result of the activity levels says Kraus, is that "customers are focusing more and more on their real needs.

"If they decide to invest more money in their specific application they are asking for a tailored product rather than just taking a standard crane or lifting application which does not precisely suit their needs."

An expression of that for example is that "customers are more and more focused on inverter controlled and energy saving solutions."

"Also demand is clearly growing for solutions which include functions like extended speed ranges to streamline processes and manufacturing time."

A similar conclusion is made by Edgar Bielinski.

"The requirements will increase and customers will demand higher performance of their cranes perfectly fitted to the individual applications. The tendency in the market will go more and more to cranes covering functions, features and providing flexible solutions" he says.

The firms are offering new technology and products. For Stahl for example new additions include the ASR 7 wire rope hoist aimed at cost-effectiveness. It is a standard hoist especially developed for the load capacity range from 20t to 32t and closing a gap between the wire rope hoist series SH and AS7.

According to Stahl, having a lower load capacity and in some cases lower classification, smaller motors and long-life ropes with smaller diameters can be used, which with other design features, means a price saving of around 25% compared with the similar AS7 model.

One of two open-cast operations which extract 40 percent of Canada's iron ore output, Mont Wright is in Quebec 1,200 km north of the province capital Montreal. Ore extraction there is being upped from 16 to 24M.t by 2014 in a US€2.1bn upgrade including an expanded transport fleet and production facilities.

Five indoor cranes and ten slewing cranes have been needed for constructing new buildings, a new concentrator for processing and concentrating the iron ore. In particular some are needed for workshop handling the giant 400t dump trucks which move the ore. They are being supplied via Groupe Industriel Premium, a subsidiary of Canadian crane builder CanStahl. Premium sells cranes and is also Stahl CraneSystems primary dealer in Quebec.

Some of the cranes have already been used to install processing machines during the busy construction stage; to ensure coordination they were delivered some weeks before the planned erection and commissioned. They remain for maintenance work on the machines in the coming years. Other parts of the order, a 120 t crane, a 60t crane, a free-standing 10t slewing crane with an SH 60 wire rope hoist and nine 2t slewing cranes will be used for maintenance and repair of dumpers.

Another significant player in Germany, Demag, now part of the Terex group's Terex Material Handling division, has been celebrating a 50th anniversary this year for its industrial hoist system, the Demag KBK modular crane construction kit.

In that time more than 10,000 kilometres of KBK profile have been marketed. It has been continuously further developed says the company and serves a wide variety of customers in different industries requiring light systems of steel and aluminium.

The profile system began with development of the "Junior System". "Development was a multi-sector response to the demands of rapidly changing industry" says Marc Rieser, senior director of the modular cranes business line.

"We were the first to offer a modular, highly flexible, and relatively cheap crane solution for the handling of loads in the workplace. That was revolutionary at the time."

Key features of the kit are its high modularity and flexibility which allows customer-specific applications, and also later adaptations and extensions. First buyers were car makers which was growing fast in the 1960s and wanted to organise production more efficiently in increasingly complex work lines.

Shortly afterwards a higher capacity KBK II, designed for loads up to 2,000 kg was launched and further profile types were developed. Additional components were developed adding turntables and track switches to the smoothly running trolleys and system suspension fittings.

The application range has been extended with ergo components to allow fitting of handling devices such as manipulators.

Historical advancements
In 2001 and 2010 there were further advances says Terex. The lightweight aluminium Aluline series was followed by the establishment of KBK II-H for distances between suspensions of more than 6m and profile section loads of up to 1,200 kg.

The system uses different profile section sizes; for loads up to 2000kg these are hollow track sections with protected inside running surfaces. KBK III outside-running profile copes with higher loads.

To prevent bending stresses and to minimise horizontal forces in the superstructure, the profiles are suspended allowing pendulation. Plastic shells in the ball joints cushion impacts, reduce noise and minimise maintenance work.

In the heavier end of manufacturing Terex Materials Handling has recently complete a major installation of overhead cranes for the industrial mixer and grinder manufacturer Maschinenfabrik Gustav Eirich based in Hardheim in the Neckar- Odenwald district near Heilbronn.

Future plans
The company has been making a major investment to both reorganise and expand now capacity level production lines. Manufacturing line logistics are being streamlined for greater output and to cope with new larger mixer units that the company is now making. New manufacturing machines are being complemented with new crane systems.

The new mixers now weight up to 46t and are beyond the capacity of previous 32t capacity cranes to move in fully assembled condition says Greissing. "They had to moved as semi-complete units and finished outside the building, loaded by expensively hired in mobile crane. That tied down production organisation too."

A new logistics centre and assembly lines for some machines were relocated to a new site 10km away leaving room for expansion work in Hardheim. Here a state-of-the-art production bay 105m long has been put up next to the oldest building. Next to this bay, the state-of-theart painting facilities were installed.

Major commitment
The facility includes seven Demag crane installations. Universal cranes, based on standardised crane components, were designed to Eirich specification. Current maximum weight for a mixer machine was used for maximum load capacity to ensure just one crane can move a unit.

Two ZKKE double-girder overhead travelling cranes, which each have a load capacity of 50t and a span of 22.22m, operate on a 12.5m high runway at a height of 12.5m. They can operate in tandem for a double sized load. DR20 hoist units on them have two-stage operation to allow assembly operations at a microspeed of 0.3m/min.

Monitoring devices on the 50t cranes improve operating safety by indicating when the upper hook position has been reached to allow cranes below to pass.

Two more 50t cranes, this time with a 9.85m span and a single girder 12.5t overhead travel crane at a lower level are used in the paint shop. way,

All the seven cranes have frequency inverters for smooth starting and variable travel speeds in the cross-travel direction and all are equipped with active load detection.

Very large loads are also handled by hoists from maker SWF Krantechnik whose CRABster winch deals with loads up to 250t. It comes with a NovaMaster hoist overload protection with strain gauge load measuring, a closed loop hoisting frequency inverter, a hoisting motor with encoder and frequency

inverter-controlled travelling machinery. The unit has a compact design and optimal approach dimensions with no horizontal hook movement and uses CraneMaster software for calculation support. It comes with four frame sizes and is available as solo winch or with a crane kit and with either double girder trolley or fixed hoist.

Broad portfolio
SWF sells mainly to independent crane manufacturers, lift equipment resellers and service companies which it claims like the high performance of the components compared to average products on the market.

It makes a wide range of equipment in a comprehensive product portfolio and adds to that a complete service package which includes support, customer specific configuration software, as well as technology and sales training says marketing communications manager David Rennert.

The CHAINsterGT chain hoists for loads up to 2500kg come with an integrated hoist inverter. This preprogrammed unit has a range of functions and ensures greater operating safety the company says; no extra effort is required when starting up. The inverter gives a wide range of speeds with greater hoist speeds at partial load, as much as double at 30% or less. Lower hoist speeds can be used for precise positioning of loads.

Other features include electronic monitoring of the slipping clutch, permanent calculation of the safe working period, mechanical and electronic overload protection and prevention of shock loads which reduces the impact of sudden shocks.

In general says SWF the use of frequency inverters for the hoisting process increases productivity. "This leads to an extended lifetime of motors and brakes as well as cost savings for maintenance work and spare parts. Furthermore, the hoist works in a far more energy efficient manner than a conventional contactor-controlled solution."

The new electronic Sway Control loadsway protection feature prevents harmful load peaks. "It therefore reduces the stress exerted on both electrical and mechanical components and as a result cuts the time and money spent on maintenance.

Ease-of-use
According to SWF cranes are easier to control and allow the load to be placed in just the right position. "The crane operator can focus his concentration entirely on the load and does not have to take into consideration the cross and long travelling movements. This represents a considerable saving in time and enhances the safety of the operation in progress."

Sway Control monitors all movements. These includes the lifting height which gives the sway length, speed of travel and the load carried. The system uses these values to regulate acceleration and braking curves correspondingly, thus preventing sway on the load suspended.

"They are used in various applications and duty classes from maintenance to production at low life-cycle costs" says Bielinski.

Recent developments include a new trolley launched at the recent Bauma exhibition. It used a wire rope hoist for a DG EOT Crane with 120t capacity. The compact designed hoist can lift to a height of 15m.

The crane is also equipped with an additional crab with a lifting capacity of 80t to enable the two crabs to jointly turn over large machine components. 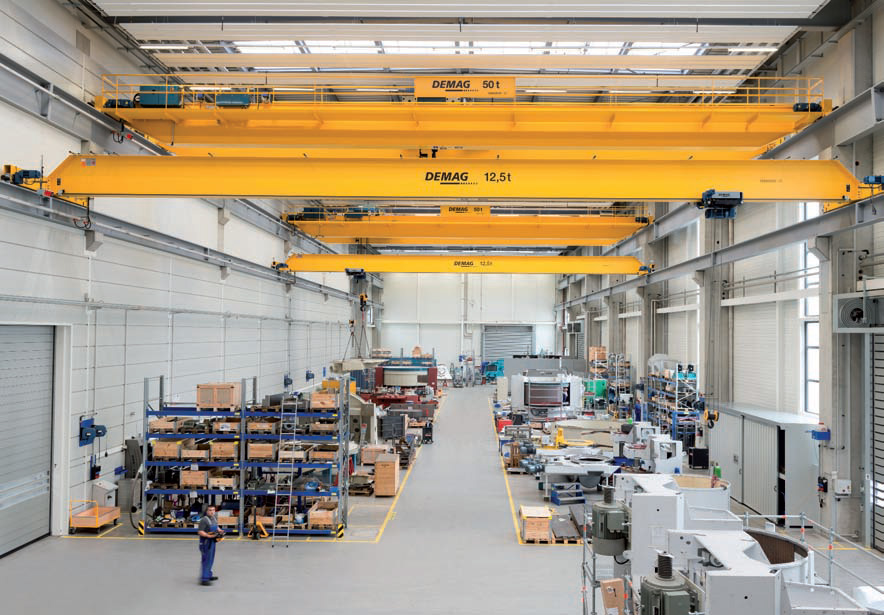 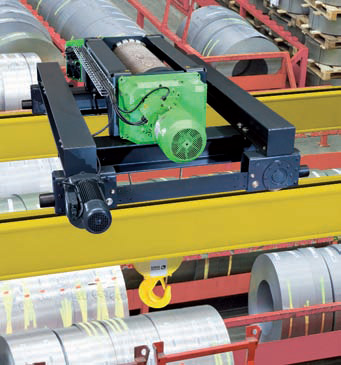 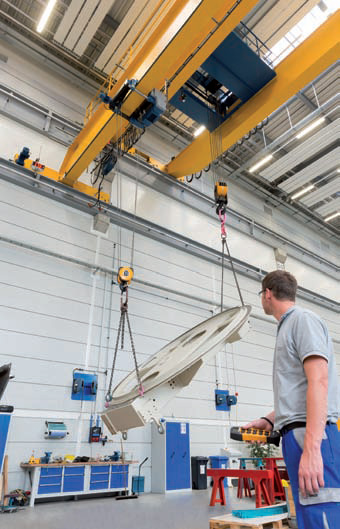 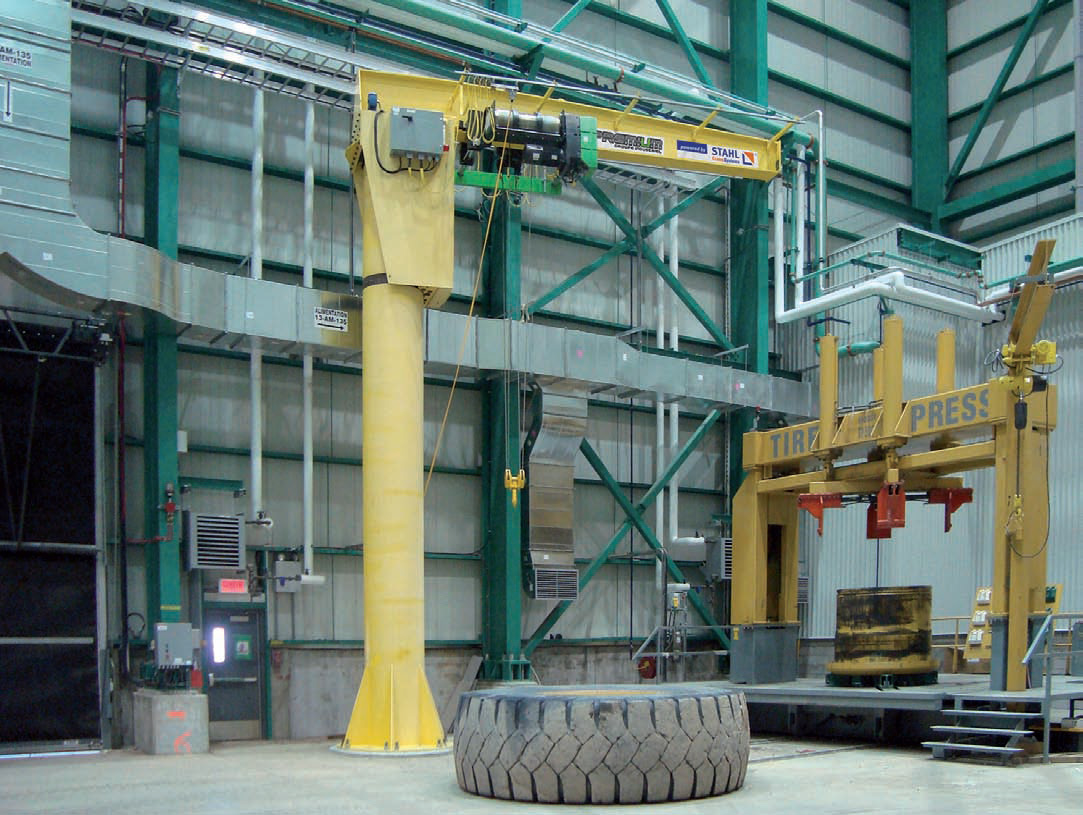 Stahl installation at an iron ore mine in Canada 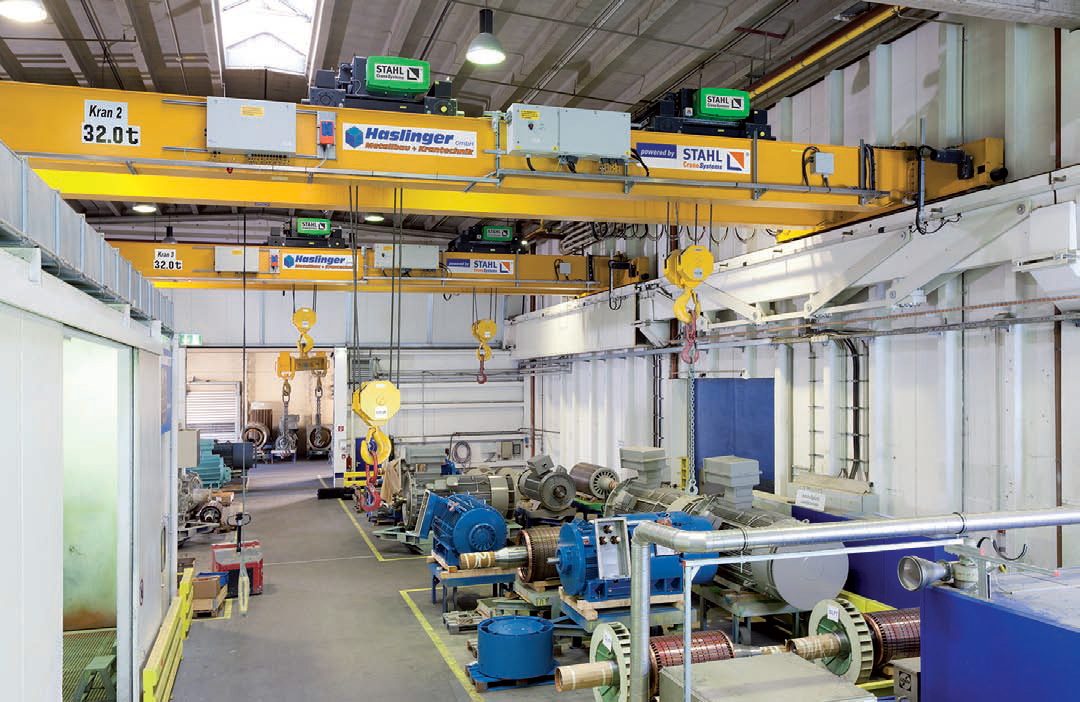