From Russia with Love

Despite the Covid-19 pandemic the industry is continuing to make investments, building new plants, upgrading existing cranes, seeing a rise in electric car sales and foreign companies expanding in Russia

The automotive industry was hit hard by Covid-19 and countries that were heavily impacted by the outbreak included China, which saw a disruption in spare parts exports; its Hubei province, the pandemic’s epicentre, is one of the country’s key automotive production centres. There were also large scale manufacturing interruptions across Europe, and the closure of assembly plants in the United States.

But not all is doom and gloom says Dan Beilfuss, director of sales Americas, Crane Solutions Group, Columbus McKinnon, which supplies Workstation and Jib Cranes, Ergonomic Lift Assists, Air Hoists, and automation technology such as its Magnetek-brand Intelli-Crane family of products to the industry, among others. “While the automotive sector was hit hard with the pandemic, like most sectors, they are continuing to make investments, but at a more conservative pace. Manufacturers continue to build new plants, upgrade existing cranes, and purchase new cranes despite these uncertain times, and are looking for ways to increase the safety of their operations,” he says.

He added, there is also a lot of investment in electric vehicle manufacturing, and we will continue to see growth in this area.

In fact, the electric vehicle market has witnessed a rapid evolution with ongoing developments in the automotive sector, dominated by globally established players such as Tesla (US), BYD (China), BMW (Germany), Volkswagen (Germany), and Nissan (Japan) and developed nations such as the US, Germany, and the UK are actively promoting the use of electric vehicles to reduce emissions, which has resulted in the growth of electric vehicle sales.

In a report by markets and markets research group, favourable government policies and support in terms of subsidies and grants, tax rebates and other nonfinancial benefits in the form of car pool lane access, new car registration (specifically in China where ICE engine new car registration is banned in some urban areas) the increasing vehicle range, better availability of charging infrastructure and proactive participation by automotive OEMs will drive global electric vehicle sales.

Renault announced this month it will launch 24 vehicles in the next five years and at least 10 electric vehicles, including a Renault 5 prototype, which is a compact electric car with a more stylish retro design than the current Renault Zoe EV, to go on sale before 2025.

“At Renault, we embrace the waves of disruption and create our own ‘Nouvelle Vague’. It’s about bringing modernity to the automotive industry. We’ll move to an energy brand, strengthening our EV leadership with the Electro Pole project and investing in Hydrogen, aiming at achieving the greenest mix in Europe by 2025,” says Luca de Meo, CEO, Groupe Renault.

According to Konecranes, another area of interest is that many foreign automotive companies have set up their businesses in Russia and they are now increasing production there, which allows them to optimise logistics chains and fully meet the demands of the local market.

Boston Consulting Group (BCG) a global management consulting firm, claims with more than $10bn committed to upgrading facilities and expanding capacity through 2020, the auto industry is the one industrial sector in Russia that is attracting serious levels of direct foreign investment, driven by the Russian government’s policy of supporting foreign investment in the auto sector. Such investment followed a “localisation through partnership” blueprint that encouraged global OEMs to invest in local production, source components locally, and form partnerships that support the modernisation of domestic OEMs.

Konecranes has been helping Toyota Motors increase production efficiency at its factory in St. Petersburg since 2007, supplying overhead cranes of 40 tons hoisting capacity to handle dies and molds.

“Our company is scrupulous about selection of suppliers. In this case we took into account the fact that our facility in St. Petersburg is close to Konecranes head office in Finland. Another strong argument when choosing a supplier was the well-developed Konecranes service able to ensure arrival of specialists within four hours if necessary,” says Leonid Kalinin, senior engineer, Toyota Motors.

Its factory is designed to produce 100,000 passenger cars per year, based on the popular model of Toyota sedans, Camry. In 2016, the second model Toyota RAV4 entered the production line, and in 2018, the factory launched a new Toyota Camry model based on TNGA.

The motor company has been steadily increasing its production capacity and that is why work load for the cranes is getting significantly higher. The number of stamps in the stamping shop has increased from 50 to 129 over the past six years. One crane makes 11 changeovers with 44 stamps per shift, the other one handles 17 stamps on average. The number of changeovers, which was 18 per shift in 2015, increased to 32 on two molding machines in 2019.

In 2014, four Konecranes overhead cranes were installed at the factory. One crane of 30/15 tons lifting capacity (with 30t main hoist and 15t auxiliary hoist) is used in the plastic products painting shop. The other crane of 20/10 tons lifting capacity works in the Toyota Boshoku department which produces car seats and interior parts.

The sheet metal stamping shop has two overhead 40/20 ton cranes operating on parallel runway rails. One crane changes over the line of presses and feeds dies to the working area. The second crane moves dies to the zone where they are disassembled and repaired. The first crane is loaded to the greatest extent with up to 50 working cycles per shift.

In 2018, two auxiliary bridge cranes of 2 tons lifting capacity were installed in the welding shop for industrial robots servicing and operation in the section of body geometry measurements. This is when the number of units of Konecranes hoisting equipment increased to six.

The cranes were initially purchased with basic outfitting and Sway Control feature which was the only option included.

Gradually, due to the active use of the machines, other functions were added to improve productivity and safety of operation. For example, the crane in the body panel stamping shop got new bridge stop sensors and new features like load display showing the weight of load under hook, the Hook Centering function to eliminate side pull and Protected Areas function to prevent the crane entering into specific zones.

Another example of a company working successfully in the Russian automotive market is Kito, which has partnered with truck manufacturer Kamza, to install its Kito EQ and Kito ER2 electric chain hoists for lifting and lowering heavy truck parts.

Kamaz is continuing to grow in the heavy truck sector and ensures every single process in its quality management runs smoothly, safely and efficiently.

Heavy weights are handled at every stage of the truck production process: from pressing the side parts, to screwing the elements, composing the driver’s cab, assembling the axles, and final inspection.

Some of these heavy weights are the flat metals which are used to form the driver’s cab. They can only be transported with the help of lifting equipment.

At Kamaz, this is handled by the Kito EQ electric chain hoist, an efficient and powerful hoist for every production hall, and a Kito Erikkila Prosystem Jib crane. The Kito EQ moves the load extremely smooth and positions the metal sheets precisely in the production machine due to its high quality frequency converter (integrated as standard). The working efficiency is significantly improved by the 1.3 higher lifting speed up to 30% of the working load limit. Other high-standard safety features are also included.

Due to its efficiency, Kamaz has decided to use the Japanese hoists for other production steps, ordering its Kito ER2 electric chain hoists via Kito partners LLC LCS and OOO Gruzopodyemnye Sistemy.

After testing the various types, the truck manufacture decided to implement the Kito ER2 for the precise positioning of the driver’s cab onto the truck frame.

The Kito ER2 is equipped with a carbon friction clutch and an electromagnetic brake for safe and user-friendly load handling. Load capacities from 125kg up to 20,000kg are possible and ensure the machine is suitable for a range of applications.

Kito electric chain hoists secure the lifting and lowering of heavy truck parts which means these production steps become more efficient. A smooth, reliable speed control and a trouble-free operation is achieved in combination with Kito Erikkila Prosystem cranes. Maximum safety is ensured through the hoist design, but also because of the Kito load chain with outstanding strength, which is installed in all chain hoists.

“It was important for us to understand what Kamaz’s requirements were for hoists; from what tasks needed to be solved to the factory conditions and how to incorporate electric chain hoists,” says Eugen Wagorowski, area sales manager, Kito.

“To make sure the right choice was made, we provided Kamaz with Kito ER2 and EQ series chain hoists for test runs at various production sites. Upon completion of the tests, the Russian truck manufacturer confirmed that the Kito electric chain hoists provided safety, reliability and durability in harsh conditions, uninterrupted operation and timely performance of production tasks at lower operating costs.”

Since 2020 OMi Crane Services has been working with Toyotetsu Stamping Plant (TTTX), a Tier One supplier to Toyota Trucks of America, and Hazama Ando Corporation to expand TTTX’s stamping facility in San Antonio, Texas. The project scope was to add two 200ft long 20 ton crane bays to four existing bays.

Kevin Picklo, GM, Gulf Coast Region, OMi, says the project consisted of a high bay, multi-runway building designed to store stamping dies and because it is a ground up addition, new cranes were always in the plans.

“Based on our relationship with Hazama and TTTX we were approached early on in the planning stages to develop a specification that was ultimately approved by TTTX,” he says.

“These cranes have 20 metric ton main hoists and 10 metric ton auxiliary hoists. The controls are wired pendants in lieu of remote controls and incorporate simultaneous operation in opposite directions to enable flipping of stamping dies,” adds Picklo.

Dean Sinclair, facilities manager, TTTX, says the specific considerations were compatibility with its existing cranes for parts, familiarity with its stamping maintenance team for maintenance and troubleshooting, durability for extending life expectancy, and past history with these units.

“We’ve always had good luck with OMi cranes and continue to use them due to the fast response time and parts availability,” he adds.

“More frequent die changes have required us to look into faster cranes while still being safe to manoeuvre. We change a bank of three dies every 30 minutes on each press, so there is almost a constant stream of flying dies over stamping as a whole. Manufacturing the required amount of vehicles each day takes a toll on our equipment, so reliability is our second priority, safety is first.

“Handling equipment will be going robotic in the near-future. Automated vehicles to transport dies and materials to each press and our die maintenance bay are becoming a reality and we’ve already begun to research the best options out there. Automated equipment is safer and frees up a forklift driver for other tasks. 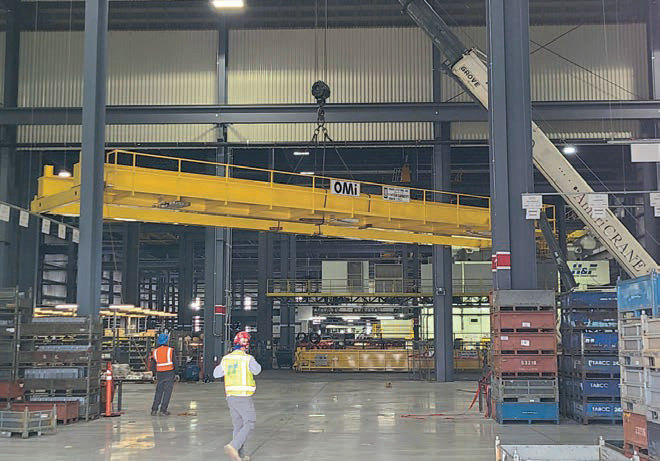 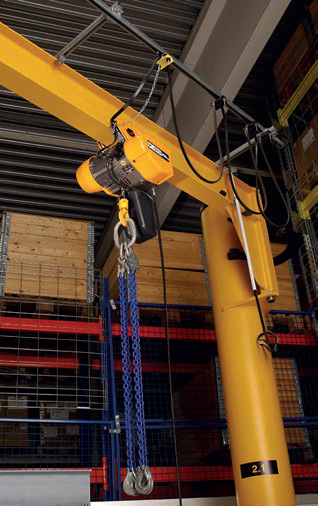 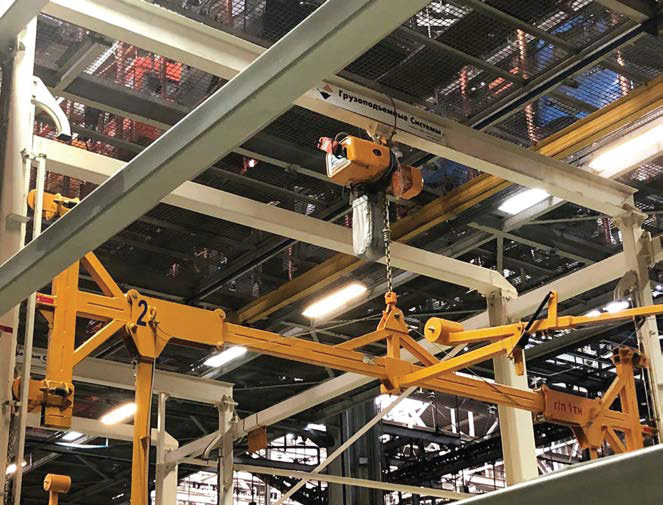 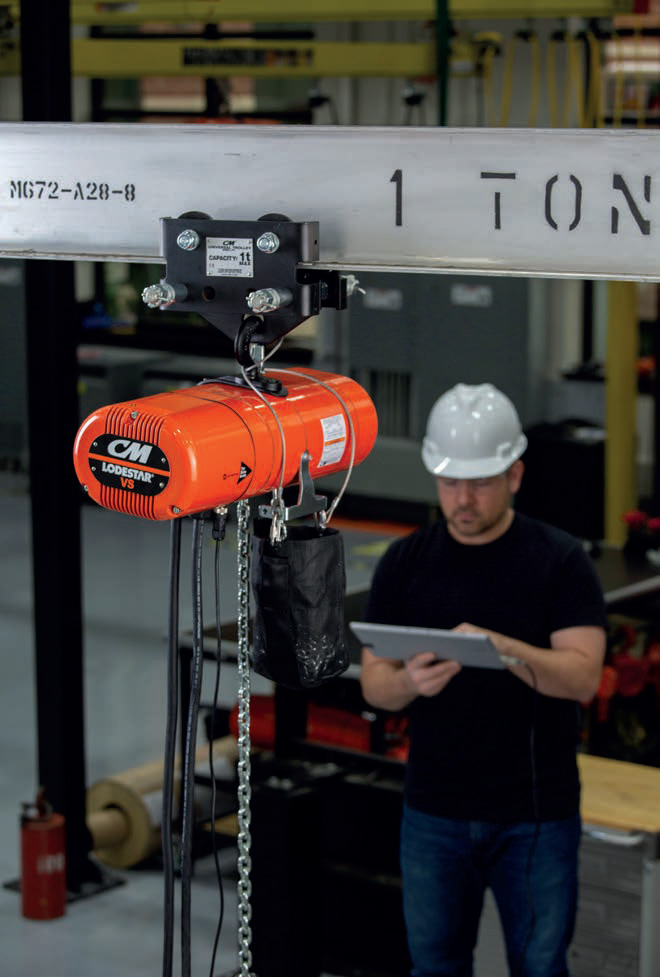 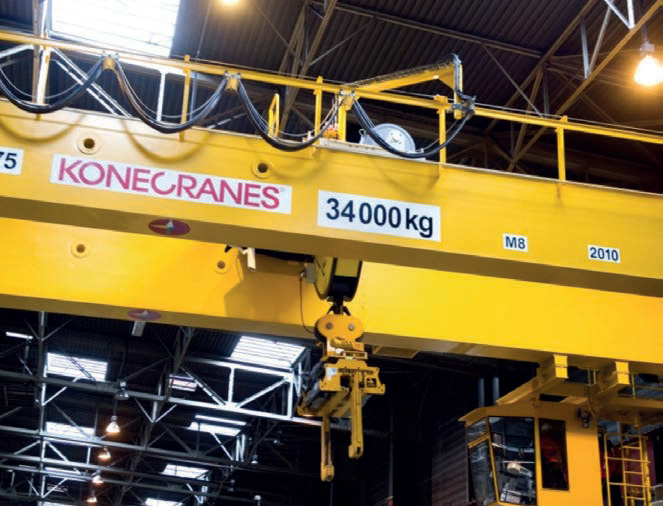 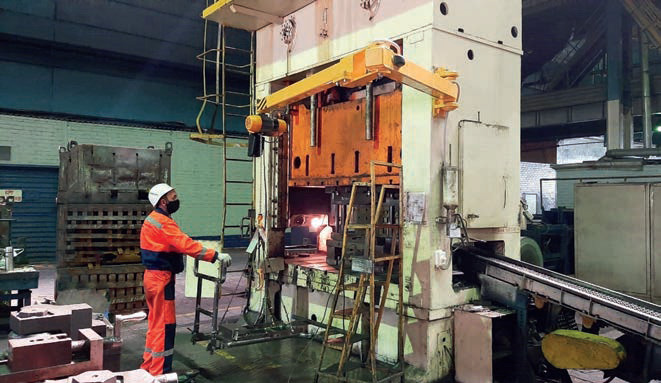 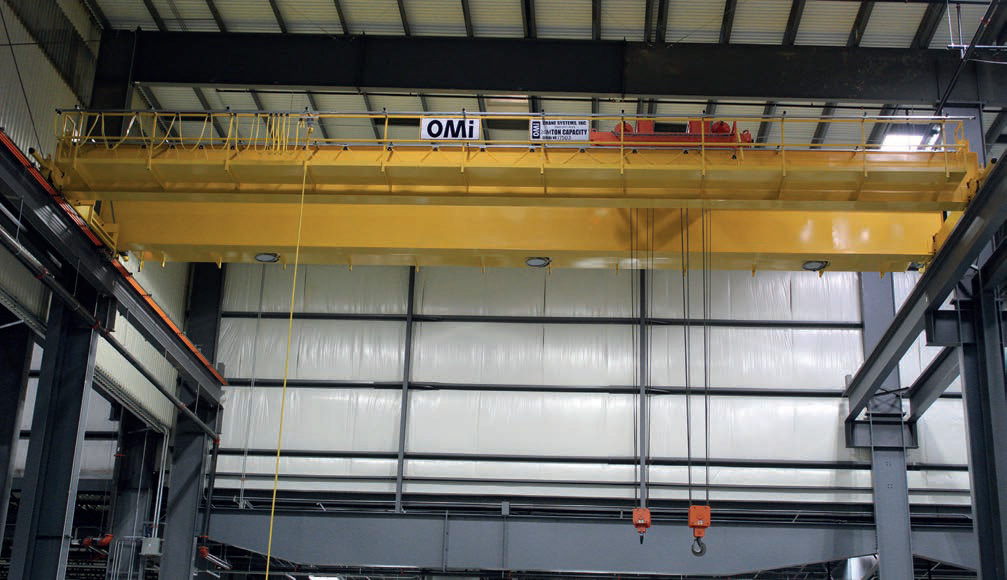 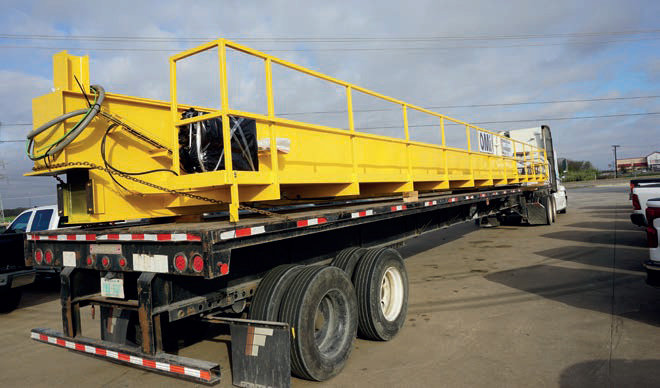 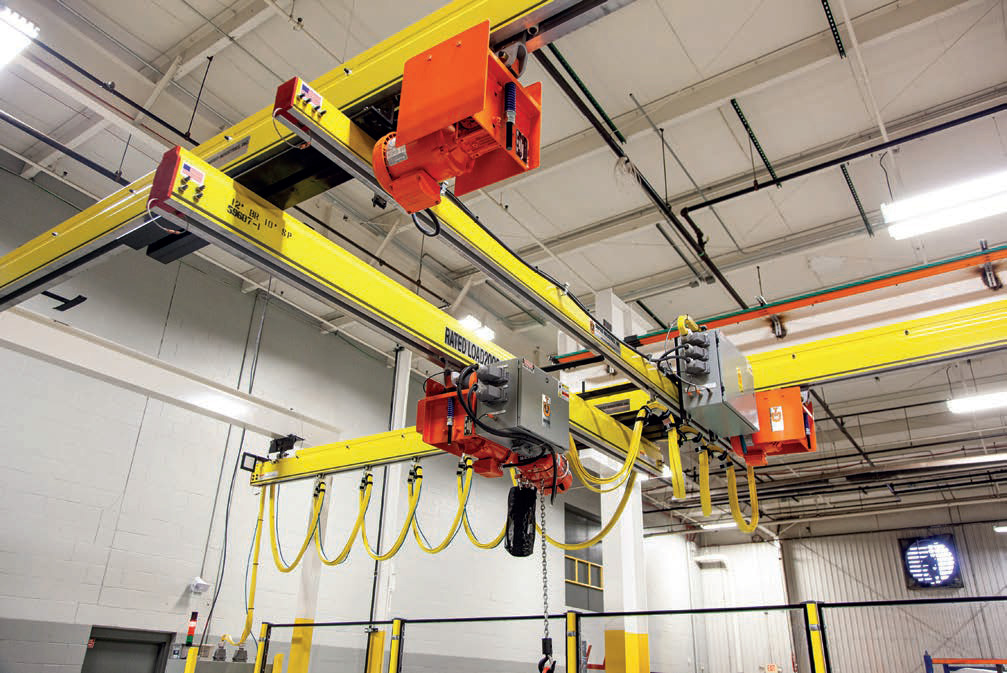