Street Crane, based in the UK, has developed a web-based tool that will revolutionise how the company, and its global network of distributors, take and produce orders. Daniel Searle visited the company.

With around 16 billion specification combinations, there’s a fair amount of choice when buying a hoist or crane from Street Crane. The company is also shipping a sizeable number of cranes— around 400 complete cranes each year, of which around 90% are for the UK market, and a total of between 2,000 to 2,500 hoists to distributors worldwide.

There were, therefore, clear time-saving benefits to be gained by the company by automating the system that both processes orders, and produces the literature that accompanies each order—for Street Crane, its distributors, and the end customers— such as the bill of materials, testing schedule, pre-engineered drawing, data sheets, and bespoke scale drawing.

And that’s what the company has achieved with its Eazycrane innovation. It’s been a long-term project—it was in the pipeline when I visited the company in Chapel-en-le-Frith, Derbyshire around three years ago—which reflects the complexity, and ultimately the power, of the software.

So, how does it work? The system can be operated either by Street Crane themselves, to put together an order for a full crane for a UK-based customer; or by any Street distributor anywhere in the world, for a crane kit, explains director Andrew Pimblett.

“The operator starts a proposal on the interface by specifying details including the required design standard; hoist type, such as chain, wire rope, and whether true vertical lift is required; the minimum duty rating; the safe working load; the height of the lift; and whether a single or double girder is to be used,” says Pimblett, who stepped down as managing director in 2018 after 28 years in the role, and 50 years at Street Crane. Further information required by the system includes the type of environment in which the crane will be used and the preferred control type, and the rail size—which can be manually selected, or the system can suggest the optimum size. The system can adapt to take into account the crane standards of any national market, such as using feet and inches, rather than metric measurements, for US customers.

A few more details are then inputted; the full process of crane specification can be completed in 57 seconds using Eazycrane, says Pimblett, although that figure is more a ‘fastest lap’ than a standard run-through— however the process still typically only takes three to four minutes. The operator selects the span length; overhead or underhung construction; the grade of steel; classification of the crane—rather than just the hoist; and the choice of I-beam or box beam, if the span is short enough to allow an I-beam. Minimum deflection is calculated and selected automatically, though this can be altered.

This all completed, the system produces a range of options for the client to consider, specifying data such as size, hoisting speed, and price, with full data sheets produced automatically to inform the client of other properties too.

The proposal also includes technical specifications of all parts, such as the hoist, trolley, electronics, cables and control; a detailed specification covering hoist power, traverse motor power, and hoist mass; and a full data sheet for components such as the end carriages, LT drives, and the mainspowered panel.

Manufacturing drawings are also created automatically and, if the building dimensions have been entered into the system, a proposal drawing can be created too, combining the drawing of the building with the crane added in the proposed position.

Using the dimensions of the building, Eazycrane can also calculate values such as headroom, distance to obstructions, and the maximum hook height.

Inputs can be changed, with the end results recalculated each time, to ensure that each client ends up with the optimum crane for their operation; proposals can be saved on the system until the order has been finalised and the customer is ready to order.

Once the order is placed, details are sent electronically to Street Crane and to the local representative to approve. Street Crane will then produce the required hoist and crane components, with the distributor just needing to source or manufacture the crane beam—the optimum weight, and the cost, of the beam is calculated by the Eazycrane system, and if Street Crane is making the complete crane for a domestic customer, the system also provides them with detailed fabrication drawings for crane beams.

“Many smaller companies don’t have similar software of their own,” says Pimblett. “Eazycrane produces drawings that are all dual-branded with the names of the distributor as well as Street Crane; most independent distributors only supply words, and don’t have the capacity for producing arrangement drawings for each of their proposals. With this system, all the distributor needs is a fabrication shop.”

Gus Zona, managing director at Street Crane: “Distributors don’t need to be a big international crane manufacturer to compete in the market. The system empowers smaller regional manufacturers, by allowing them to present information and proposals in a more professional manner. Therefore, Street Crane is protecting the business of their dealers because they aren’t competing with them.”

This helps to maintain the health of the crane industry, adds Pimblett: “In my life I’ve seen international crane manufacturers put regional crane makers out of business, or acquire them. But in Europe and the US, because the crane market isn’t as big as it was, bigger manufacturers are regressing, and closing regional branches and locations due to transport costs.”

The system was introduced around the start of 2020, with a selection of distributors asked to trial Eazycrane. “It allows Street Crane to act almost as a single organisation with our distributors,” says Pimblett.

“And we are able to log on remotely to a distributor’s portal, if required, to offer specialised assistance.”

“People want to follow the path of least resistance,” notes Zona. “And this system ticks so many boxes, the possibilities are almost endless.”

A further advantage of the system is its ability to provide accurate lead times, based on stocks of the required components. The Eazycrane system drives Street Crane’s ERP business system, called Unity, which monitors the stock status of Street’s available components—whether these are at the company’s Chapel-en-le-Frith facility, where the company keeps between 7 to 10 days of stock, its USA facility, any of its warehouses, or at its freight forwarding partner.

The orders, when placed either through Eazycrane or more traditional methods, lead to hoists, crane kits or complete cranes with capacities up to 5t, for chain hoists, or up to 55t for wire rope hoists.

That’s where the large amount of stock comes in—to help keep delivery times short. “Due to the diversity of orders we receive, with all the possible combinations, we inevitably have to have a large inventory,” says Pimblett. “We have the smallest inventory possible—but it’s still very big.

“Some components are used all the time, and some are hardly ever used—but we still need them here, just in case.” Certain parts are made in-house, as catering for all possibilities with larger components such as drums wouldn’t be practical. A CNC machine—one of the biggest in the UK, says Pimblett—enables the production of drums up to 6m long, and up to 950mm in diameter. Similarly, gearboxes are assembled on site, to accommodate bespoke variables such as gear ratios.

The result of the large amounts of stock, the organisation of the Unity system, and the automated production of the bill of materials and testing schedule for each order, is that entire cranes are typically delivered within 6 to 8 weeks. In the US, where the company has around £2m of kits, components and spares ready for use at its facility in Houston, a lead time of 4 weeks is more usual.

Of the time required for the manufacturing process, around onesixth is devoted to testing, says Pimblett.

For this, Street Crane employ a range of testing kit, from the test rig situated between two of the company’s facilities to enable testing in outdoor conditions, to the ultrasonic testing by an outside company of the automated welding performed on its crane beams.

End of line testing follows the requirements set out in the testing schedule, which comprises a number of steps. The hoist is put through a series of automatic electrical cycles, with the length of the cycling dependent on the classification of the unit. After the electrical cycles have been completed, the temperature of certain components, with the tolerances for each specified in the bill of materials. Vibration levels are also checked, during the running test.

For maintenance further down the line, each component, from gears to ropes and castings, has a serial number which is logged onto the system. This information is available to each distributor, making the supply of spare parts easier; each order is recorded on the system, enabling Street Crane and its distributors to refer back to which components were used in each crane. This total traceability is also beneficial should there be any quality issues with a batch of components.

One of the company’s next goals is to create a spare parts facility within the Eazycrane portal, which should be due this year; the development will enable any dealer to use a job number to identify and order the required spare parts online. 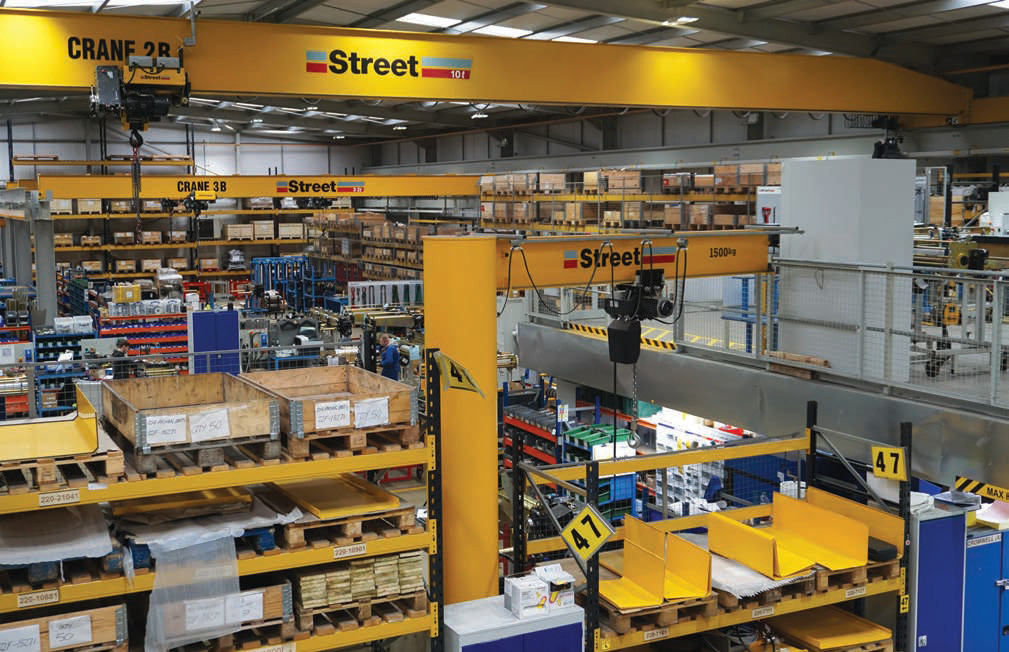 The company machines its own drums in-house, with its CNC system capable of producing drums up to 9m long.

For UK customers, the company supplies complete cranes; both automated and manual welding is used on the girders.

Director Andrew Pimblett amongst some of Street Crane’s hoists.