Car and truck makers require huge numbers of hoists, lifts and winches in their factories. Julian Champkin investigates the lifting machinery that is used.

The automotive industry has long been recognised as major user of lifting equipment. It is also an extremely competitive and efficiency-demanding industry, with large factories running just-in-time operations assembling huge numbers of components from the tiny to the large. Warehouse logistics alone are mind-bogglingly complex.

Which makes it perhaps surprising that there are few specialist, customised or bespoke lifting solutions in car and truckmaking. Off-the-shelf designs seem to suffice—but they must be the highest of high-end off-the-shelf.

“There are no solutions or products made specially for the automotive sector,” says Thomas Kraus, support centre director at Stahl CraneSystems. “Given the modular design principle of our hoisting equipment, we are able to serve most of our automotive customers´ applications either with an electric chain hoist or a wire rope hoist.”

Chris Lindley-Smith, sales director of Street Crane, says: “At the smaller component end of the automotive industry, for manipulating engine blocks, cylinder heads and so on, the hoists themselves are fairly standard.

“The interest lies more in what is below the hook. That is where specialisation happens. The smart technology in the larger press-shop cranes lies in such things as anti-sway control, which are far from specific to the auto sector.”

Nevertheless, the industry does have its own particular demands. They are imposed by the absolute need to deliver, and to deliver on time. Delay cannot be accepted, and every second saved in production can count. “The main thing in the automotive industry is duty—that is, frequency of use.” So says Andy Allen, director of lifting equipment specialists Hoist and Winch. “We installed hoists recently for a factory making car seats, It was performing at the rate of 15 cycles an hour, which is a lot.

“Factor Two is speed,” he says, “and the third factor is controllability of the hoist unit.” The two are linked: “Most hoists are two-speed, fast and slow. Fast is wanted to get the hook and load between the pick- up point and the destination in as short a time as possible. Slow is wanted for fine positioning when it gets there.

“Headroom is often a critical factor. Space costs money. Usually, as with any industrial process, the manufacturers are trying to squeeze a quart into a pint pot, so whatever machines they install in their buildings tend to leave not a lot of headroom; and the headroom that does exist can be restricted by overhead services and the like. So dimensions on most jobs are a critical item, and even more so in the car industry. Hoist units that offer compact hook-to-beam distances are at an advantage. “

Another item, standard on most hoists but particularly wanted in vehicle-making, is the limit switch. “Limit switches are fitted to most hoists these days, and again the automotive industry finds them specially desirable,” says Allen. “Their operators work close to the limits anyway in terms of time, speed, and so on; so you need that safety.”

The industry requires heavy duty and high duty (that is to say, fast and frequentcycle) hoists. It also needs them to be high quality. “Production line duties in the industry are always predicated on just-intime delivery contracts,” he says. “This is what imposes those special considerations. Contracts can be specific down to the last minutes of delivery. Most key suppliers are subject to penalty clauses if they don’t deliver the component on time. Even if the cause is way outside their control, like a motorway traffic jam, they are liable not just for their own component but for consequential losses as well, all the way down the production line, and those can be immense. It is that which makes reliability absolutely paramount to anyone who supplies to the motor industry. It is not uncommon for a component supplier to have a spare delivery truck, complete with driver, permanently on standby in case the main truck breaks down. Reliability is massive in the automotive industry.”

Lindley-Smith at Street says: “A press- shop crane will come in the top 20% in terms of specification.”

Clearly, reliability is the reason. “That reliability requirement apart, hoists need not be particularly specialised,” says Allen. “Customised solutions are not usually required. The difficulty for us, as hoist suppliers to the industry, is selecting exactly the right hoist for our client out of all those that are on the market. The bespoke element is not great. Atmospheres are generally clean, so there is no need for ATEX or explosion-proof machinery. Duty, speed, reliability, clearance, and limit switches that can be guaranteed to work— those are the primary considerations.”

Kraus says: “Most of the lifting applications in the automotive industry are standard ones.” Exceptions to Allen’s clean-air scenario are the paint-shops, where fumes become a consideration. “Most critical in terms of paint shops is the handling of the explosive atmosphere,” Kraus adds. “Sometimes all equipment there must be certified as explosion proof.”

Lindley-Smith says: “We are involved in the heavy end of automotive lifting—in tool rooms, and with cranes for press shops where they make body parts.

“Typical loads are from 30t–60t safe working load; generally M6 heavy-duty classifications are used for lift and travel motors and the like. Variable frequency drive controllers are usual in this industry, because auto makers want speedy delivery of tools to the machine and very fine precision once it has got there. Very fine controllability at the delivery site is critical.” This is Lindley-Smith’s expansion of Allen’s two-speed point above.

“For the same reason semi-automatic control systems tend to be preferred,” he says. Total automation cannot yet deliver those final sub-millimetre alignments. “In a press shop, the different dies—which can be heavy—are stored each in their own bay in a storage warehouse, and are picked up and transferred to the press machine when they are needed. Picking them up from their storage space, and delivering them back to it afterwards, can be done automatically, by digital control; but positioning and mounting them at the press machine has to be very precise indeed, calling for hand operation to do the last few centimetres or millimetres.

“So semi-automatic control is generally favoured. For moving very heavy parts some continental manufacturers have what they call ‘dark room’ operation, which is totally automatic; but as far as I know there are none in the UK as yet. The smart technology in the larger press-shop cranes lies in such things as anti-sway control, which again is not specific to the motor industry.”

A technology that has proved useful, and much used, is the dual-chain hoist. “We clearly see an advantage in our electric dual chain hoist, the STD series,” says Kraus. “The basic hoist is equipped with two chains and chainblocks driven by one motor. Due to the fact that both chains are running through one chain sprocket, both hooks are always synchronized. So it is easy to lift platforms like skids or any other devices.”

The photograph shows a production line carrying almost-completed cars on such a system. Synchronised chains at front and back of the vehicle lift it and keep it level; the yellow pantograph system prevents side-to-side sway.

So while the automotive industry needs little specialisation in its lifting, it does need that lifting to be reliable, fast and precise. It would seem an area where only the best will do. 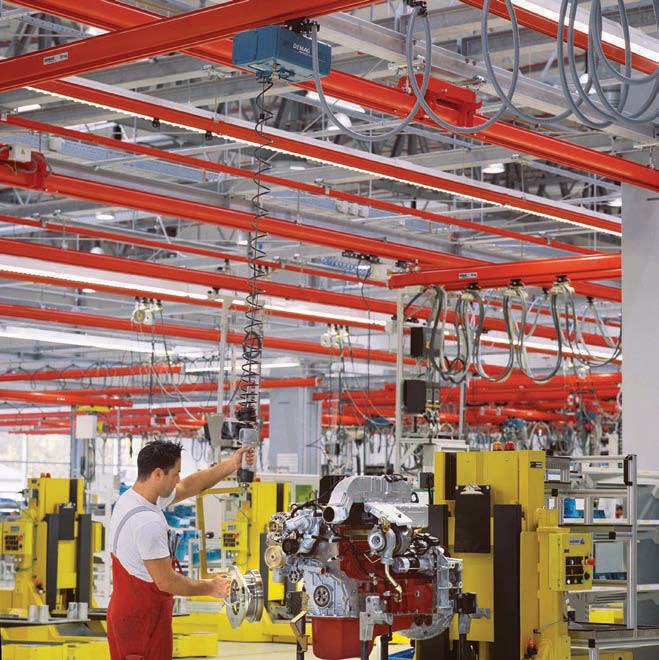 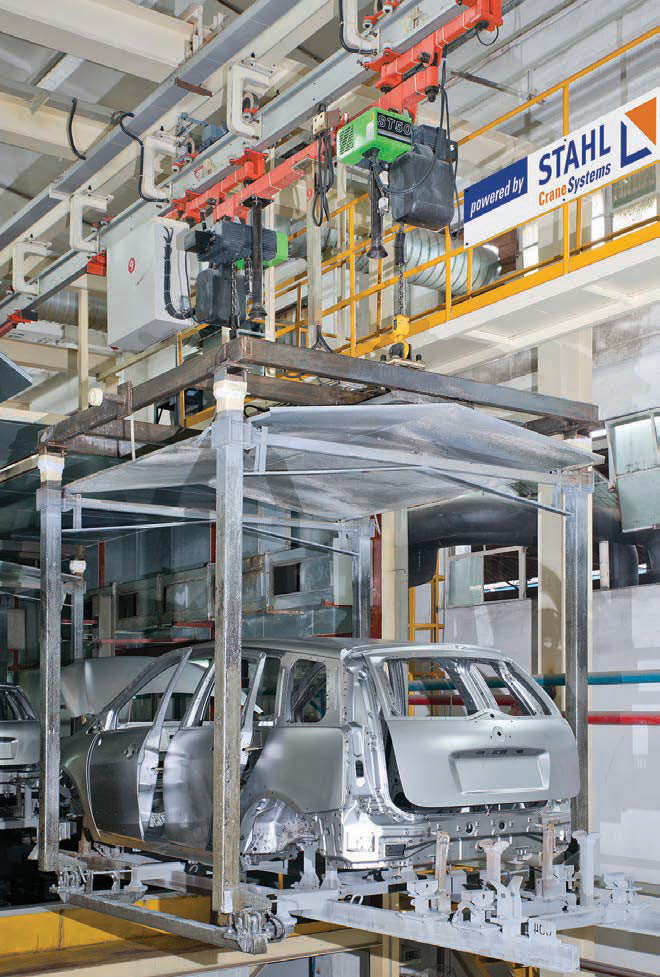 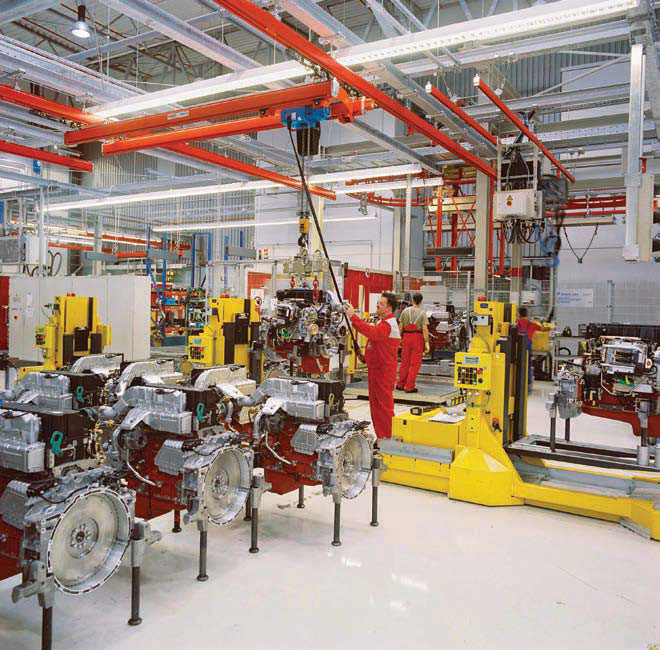