The MSC Gülsün is the world’s largest container ship. Launched in July last year she is 400m long. She can carry 23,756 containers (TEU); and, most significantly, she carries them stacked in rows of 24 across her 62m-wide deck. Gantries to load and unload her therefore must have a reach of at least that distance, and she will not be the last or the only container ship of that width; ten sister ships are on order or have been delivered.

Nor are her ports of call limited. Quingdao, Shanghai, Kaliningrad, Rotterdam, Felixstowe and Algercieras have been visited already in her lessthan- 12-months of service. So, too, has Gdansk. The Gülsün called there in August last year—just as the port took delivery of a new, ultra-large container crane from Liebherr, one of the few capable of handling her.

Gdansk is Europe’s fastest-growing container port. It saw 22% growth in traffic in 2018. The new crane, supplied to its DCT terminal, is identical to two previous cranes supplied earlier. It has a back reach of 15m, a lift height over rail of 50m—and an outreach of 72m, which makes it and its fellow cranes capable of handling vessels with not just 24 but 25 rows of containers across their deck.

It can therefore handle container ships larger than any that have yet been built. Gdansk also has five previously-installed Liebherr ship-to-shore cranes only marginally smaller, so now has eight cranes capable of handling the latest and future generations of ultra-large container vessels. Gdansk is future proofing itself.

It is not alone. Ports world-wide are re-equipping themselves to handle ever-larger ships with ever-increasing efficiency.

Scale, speed, and automation would seem to be the criteria, with digital technology being a large part of the key to achieving them. Ship-owners want fast turnaround. Importers and exporters want complete traceability. Each one of the Gülsün’s 24,000-odd containers might have a different origin and a different final destination, and its position in the terminal’s huge intermodal transit stacks must be known and trackable throughout its journey. As well as scale, port operators are needing efficiency, reliability and speed to stay in business. Intelligent technology is a key to all three.

Automation is not confined to giant static cranes like Gdansk’s big Liebherrs. Kalmar offer automation of rubber-tyred gantry cranes, and also of autostraddlers, which can park themselves over individual containers and pick and carry them to their next position for onward transit, be that truck, train, or another stack within the port.

“Rubber-tyred gantry cranes (RTGs) are the most popular equipment for container stacking at terminals around the world,” say Kalmar, “especially where high-capacity stacking and good manoeuvrability are key requirements.”

And they no longer need operators on board. “To drive operator safety and efficiency existing RTGs can now be automated, allowing them to be safely managed remotely,” say Kalmar. This allows one remote operator to handle three RTGs; and not just new RTGs as Kalmar are offering retrofits.

Removing the driver makes operations safer. They have a way to make them safer still. “Remove also the need for people to be in the handling lane under the crane, by introducing automated shuttle carriers,” say Kalmar. Their ‘AutoStrad’ operations are typically suitable for small and midsize terminals. The AutoStrad parks itself over a container, picks it up, and drives it to where it is required. It navigates on digitally-set routes around the port to an accuracy, say Kalmar, of within 2cm.

“It provides unmatched reliability and flexibility. Its ability to simply deposit the box anywhere on the pavement means you can decouple the duty cycles of quay and yard cranes. It allows building of buffer stacks behind the crane; ASCs, Autoshuttles and automated truck handling make it now possible to have end-to-end automation from water to landside.”

And realising that change can be simple, low-risk, and achieved within a relatively short time frame, they say: “Only a single piece of equipment is required. You can convert from a manual to an automated straddle carrier terminal without any temporary drop in capacity and throughput.”

MSC Gulsun, the largest container ship in the world, at Shanghai’s Terminal III 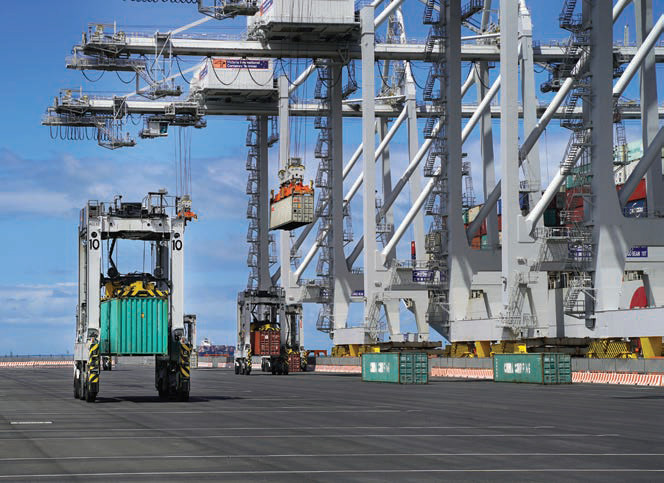 Kalmar auto-straddlers are designed to deliver economy and safety