Digitalisation is enhancing performance and safety across the lifting sector with a raft of innovations. Daniel Searle looks first at Condra’s move into semi- and fully-automated cranes.

The move followed a general trend in the mining and industrial sectors away from manual control and towards full automation, the company said at the time. Condra has been installing increasingly sophisticated semi-automated crane systems, beginning in 2003 with a grabbing crane which was installed at a Durban-based spice company facility. The crane was commissioned to pick spices— using barcode-scanning technology—and transport them to specific points for release over the hoppers for blending and packing.

Other semi-automated projects have included a crane for handling concrete— which calculates the optimum position to dump the load by using a height sensor, thereby detecting which areas are already approaching full capacity—and hoists for opening and closing the sluice gates on a dam. With the hoists lifting 81m, and the mechanism operated with a sustained button-push, the process can’t be done manually as it would require the operator to hold down the button for a long period of time.

The Lonmin installation was a 16t-capacity, 16m-span double-girder electric overhead grabbing crane, fitted with a customer-specified mechanical rope grab instead of a hydraulic alternative; this was designed to improve the durability of mechanical operation in the abrasive operating environment. It also incorporates dual hoists: one to raise and lower the load and the other to mechanically close the grab via an internal sheave arrangement, which overcomes the spring-loaded open state.

The crane is programmed remotely by an operator, from an external control room, where on-screen monitoring is accompanied by visual monitoring capabilities via closed-circuit television.

The Lonmin project came from a request from the client, says Condra’s managing director Marc Kleiner: “The company already had an automated crane in operation but the mechanics didn’t quite work, despite the Siemens electrics being fine. Lonmin asked us to replace the crane with one of our cranes; we worked with a subcontractor to provide the electronics, again using Siemens.

Following that project, Condra is now offering fully-automated capability across its range of single-girder and doublegirder cranes, which include gantry cranes, bridge cranes, and cantilever cranes, available up to heavy duty Class 4.

“We’ve also been developing an upside-down stacker crane, which provides more floor space than forklifts,” says Kleiner. “The company next door makes mobile cranes—we took inspiration from watching them one day. The design is finished; the next step will be to make it.” 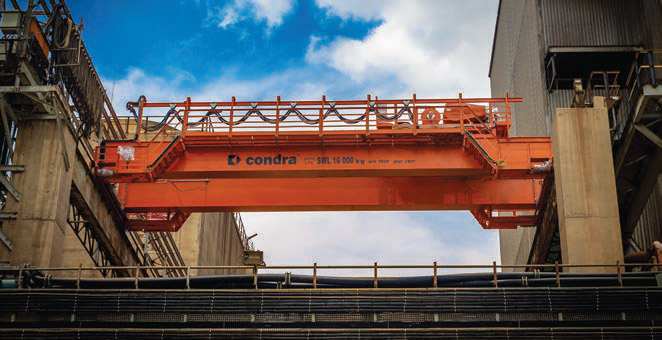