A work in process

The process crane is now digitally embedded in its task. Julian Champkin reports.

In one sense they are a traditional product: an overhead gantry feeds fuel, or logs, or scrap metal or cement or indeed any raw material from a delivery yard into a factory where it is processed into power, or plywood or plasterboard, or kerbstones or anything else. The process crane has been around since the industrial revolution. And the principle remains constant: an overhead girder, with a trolley-mounted grab, moves on an A-frame or on rails to feed raw material to the ever-demanding maws of the machinery that will transform it into something useful.

Whether it is feeding biomass into a power furnace or steel into a mill, process cranes are there to do the same task, over and over, many times a day or an hour. It makes sense, therefore, to optimise their design to the particular task in hand. It makes more than sense, indeed a necessity, that the process crane is reliable. Frequently they are required to operate 24/7, for 52 weeks a year. Downtime in this component, for repair or for maintenance, can bring the entire factory to a halt.

One other thing they have in common: their centrality to do the task in hand. The rate at which the factory operates depends on the rate at which they feed in raw material. Digital control and feedbacks of data have increased this interdependence to the point where crane, factory and process have become a single indivisible unit. ‘Holistic’ is an overused buzzword, but it does describe the way in which the entire production operation can be regarded as a single process rather than as a series of connected units.

Consider, for example, Demag’s recent contribution to steel fabrication company Stahlo. Stahlo Stahlservice processes sheet steel into customer-specific strips, blanks and cut-to-size sheets at its plant at Gera near Leipzig in Germany. The plant presses steel for automobile bodies; for further steel processing and refining at the site the company has just completed an entirely new steel service centre there. Stahlo has built five more production bays and has invested in, among other areas, another pressing line with a contours press that can deliver 800 tonnes of force. Stahlo’s intention was to double the capacity of the plant. To achieve this the material flow needed to be restructured. That is why 12 new cranes have been installed in the new production bays. Demag Cranes & Components won the tender for the project.

Stahlo did not buy just the cranes from Demag. In with the cranes came the Demag Warehouse Management System (WMS), which will control the entire material flow through the plant.

The production process begins in the central coil store. Here aluminium coils weighing up to 30 tonnes and steel coils, up to 40 tonnes, are stowed.

The two process cranes in the coil store have a load capacity of 48 tonnes each, and a beam length (track gauge) of 41.10 meters. They travel on a 126 metre runway. The coils arrive by rail or by truck; after unloading them the cranes are operated manually. The coils are placed first on one of three motorised roller tables, which makes it possible to easily remove the packaging.

After quality control the process cranes – now in fully automatic mode – lift and deposit the coils at the storage location specified by Demag’s WMS warehouse management system. Aluminium coils are moved by grabs, steel coils are moved by magnets. The cranes need therefore to be able to change their load handling attachment easily, quickly and automatically: the changeover is made via a permanently reeved spreader.

Handling by magnet offers the advantage that the coils can be stacked with smaller spaces left between them. As a result, the necessary distance between the coils is reduced from 800 mm to 400 mm. The cranes sense which type of coil is being handled, and therefore how close together they should be stored. They are equipped with automatic position measuring systems for setting down the loads with absolute precision at the spot required. Accordingly, the intake capacity of the warehouse is increased.

The next set of cranes deliver the coils on demand to defined transfer points in production bays numbered two to six. The bays are arranged transversely to the central warehouse and are where processing and refining takes place. The performance of these cranes was designed for high handling rates. Their duties also include re-storage of residual amounts from processing, which is also performed at high speeds.

The production bays themselves, where the coils are processed, have also received new Demag cranes. In two of the bays the process cranes are fitted with calibrated weighing equipment and highly accurate position measuring systems. As well as coil handling, these cranes will replace and position the carriers for the blanks. Sway control is important here: of the 12 cranes, six will be designed as low deadweight V-type cranes, having high load capacities and reduced oscillation characteristics.

So Demag did rather more than simply supply a set of cranes. Project management, project planning, and delivery of an integrated solution from a single source were part of the remit. The integrated solution includes the Demag Warehouse Management System, which is now responsible for controlling the entire material flow in the expanded steel service centre. In essence, therefore, Demag is embedded in the production process.

Demag configures the warehouse management system for individual requirements in each application and, here, designed it to meet the specific requirements of high-availability crane handling required for the steel industry. In the Stahlo warehouse the Demag WMS ensures (among other things) the optimal use of the available space. The direct connection to the Stahlo ERP (Enterprise Resource Planning) system creates the conditions for a continuous flow of information.

Crane makers Kranbau Köthen of Saxony-Anhalt, Germany, specialise in bespoke, process and automatic cranes. They too are just completing a very large order – the largest in fact, in its 87-year history. It is also for a steel company, in this case for Thyssenkrupp Steel Europe.

The order, worth EUR 14 million, is for a double-girder ladle transport crane with a 40m span and 390t capacity. This is the largest double-beam crane that the company has ever built and is currently in the final stages of installation.

The crane is to replace a 360t crane built in 1974, which over the years had been upgraded to carry 380t with a lifting speed of 3.5m/min, but which is no longer adequate. The new crane will have a higher capacity and, at 10m/min, over twice the lifting speed.

It will operate as the central crane in the casting hall in Oxygen Steel plant 2 at Thyssenkrupp’s Duisburg Beeckerwerth foundry, where almost 70 ladles of molten metal are lifted every day; it therefore had to be designed for an ambient temperature of 60 degrees and for the transport of flammable masses according to DIN EN 13135 and DIN EN 14492/2. The specification documents run to 180 pages.

The ladle crane has a main hoist with 40:4 sheaving and a sliding mechanism on the trolley for auxiliary lifting hooks. The hoist is rotatable and equipped with very precise weighing sensors. A special feature is the sensing system in the hooks: which has two sensors, set at an angle to each other, to check the positioning to ensure that the casting ladle lies safely in the hook mouth before the start of the lifting process. Only then is the lifting movement released and free to move.

The crane is the central one of three cranes located on the same runway, which gives it an essential strategic importance. It is the only one of the three that feeds ladles from the continuous casting system to the rotary towers; in other words, if the crane fails, the entire steelworks stands still. Failure is therefore not an option. Hence redundancy has been built in to all the drives. In the event of any motor failure the crane can still be driven at half speed. Nor does a rope failure cause a load crash, as a transfer shock is generated which is hydraulically cushioned by a rope lock device. A large number of redundancy mechanisms are also provided in the switchgear to ensure high availability of the crane.

The pandemic presented a particular challenge to completing the order. Appointments with the customer, such as talks over the drawings, were only possible virtually. Purchasing faced supply-chain issues, for example with acquisition of the custom-made special transmissions. Nevertheless, Kranbau Köthen was able to keep the agreed delivery date and delivered the crane to Duisberg on time at the end of April 2021.

Transport of such a large crane of course was not easy. From Köthen it went by truck, to the river-port of Aken. Route tests and permits – including for crossing rail lines – were needed; road signs, streetlights and traffic lights were dismantled and overhead lines had to be lifted. Steel plates were laid to protect pavements. Eight conveys set out, over several days, at 10pm to reduce disruption to traffic; the two bridge beams were 4m high by 3m wide and entailed a convoy length of 70m, which had to negotiate roundabouts and intersections. At Aken they were transferred to a fleet of three barges for a five-day journey on the Rhine to Duisberg.

They were unloaded by a specially-installed lattice mast crane; pre-assembly on the ground began on time on May 2. After four weeks, in early June, the crane will be lifted onto a purpose-built crane runway extension outside the casting hall and completed there.

In order to reach its position as the central crane, it must pass under the first crane – which will be lifted out of the way by two crawler cranes. So as Thomas Lehmann, marketing manager of Kranbau Köthen puts it, the project “is still exciting.”

Spanish crane-makers Jaso have been similarly involved recently with steel producers ArcelMittor – in their case, twice over. The first crane ordered was for handling liquid steel. It was installed in August 2019 and is already working at full capacity as a strategic piece of equipment in the manufacture of steel sections on the ArcelorMittal Differdange European production site in Luxembourg.

The crane was manufactured on the Jaso premises using 275 tonnes of steel with the S275JR and S355J2+N grades, with thicknesses ranging between 10, 15 and 20 millimetres.

The success of the order led directly, within the space of 18 months, to a second collaboration with ArcelorMittel, this time to replace a crane at its distribution centre in Basauri, south of Bilbao. This is for a double girder overhead crane with rotating trolley and a load capacity of up to 20 tonnes; a happy symbiosis is that this crane was partly manufactured from ArcelorMittal’s own steel. “It is an interesting win-win collaboration,” says marketing manager Antonio Naranja, “as Distribución Iberia [ArcelorMittel’s Spanish distribution operation] is both our customer and supplier, and JASO in turn is both supplier and customer.”

“The new crane has led to an improvement in the process; it now incorporates a permanent magnet that allows a 90-degree turn of the material being handled. It has also increased efficiency in transporting of loads: the obsolete crane had a load capacity of 10 tonnes, while the new one can handle up to 20 tonnes. The process has also been improved in terms of safety, as all movements can now be carried out with a single remote control.”

As processes become more complex and more interdependent, the systems that control them become ever more dependent on real-time data collection and intelligent software to analyse that data. The process crane is now embedded in that system and can contain and be a source of that all-controlling software. It has come a long way from being just a steel beam with a hook hanging from it. 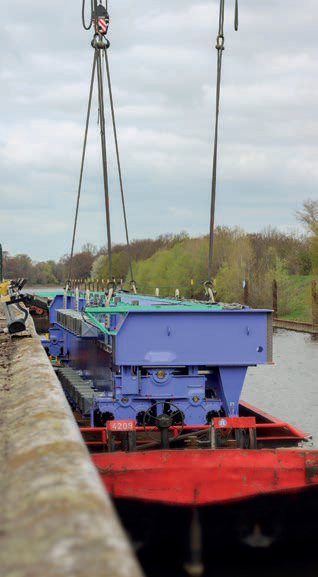 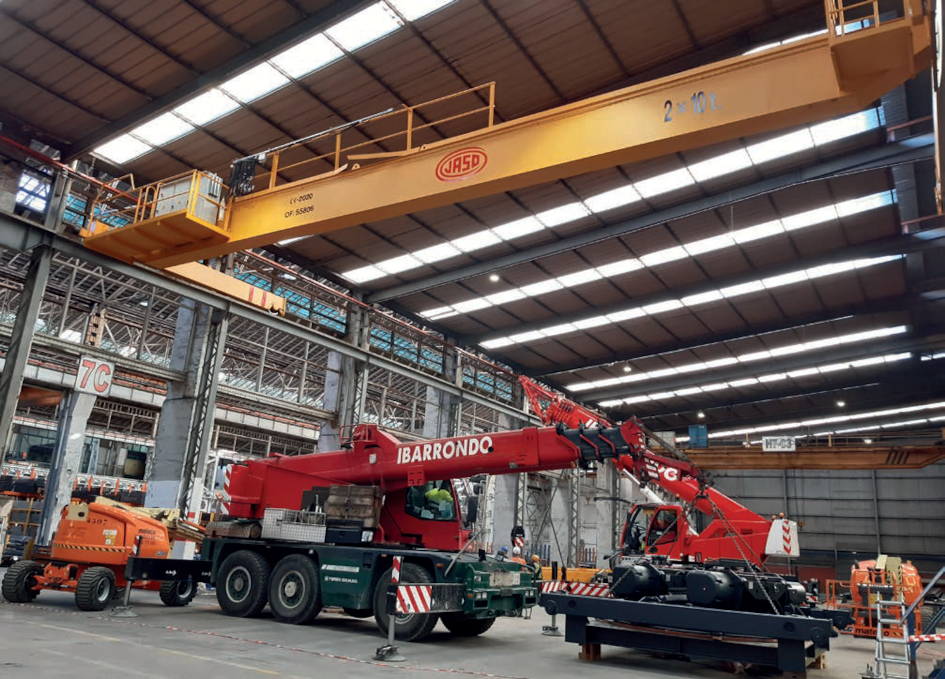 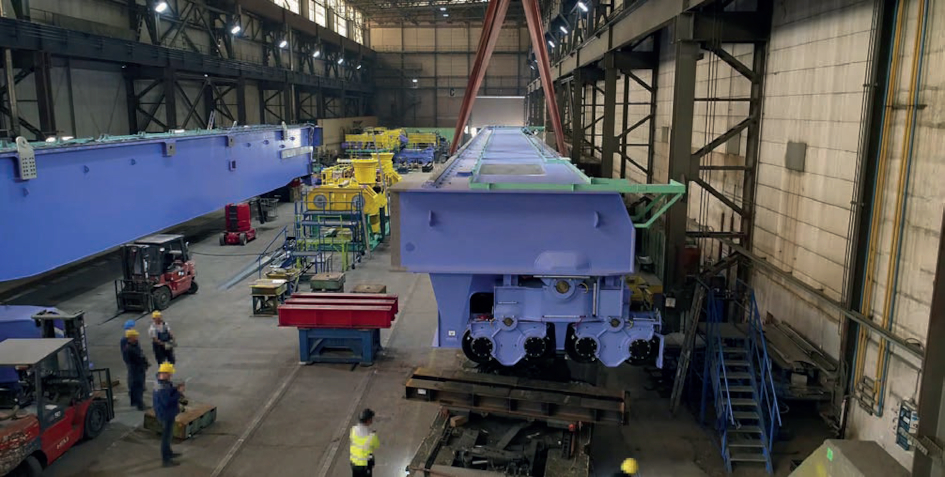 The Kranbau Köthen beams being loaded for transport to Duisberg 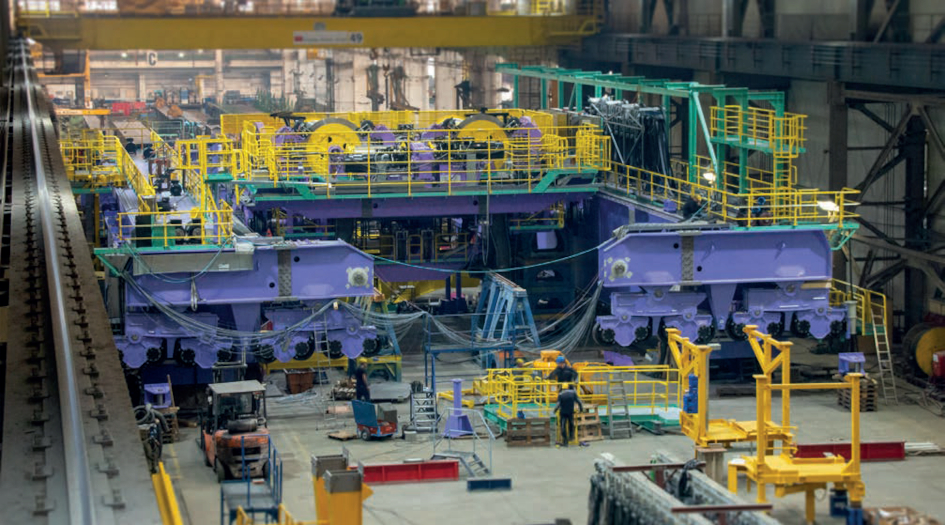 The massive Kranbau trolley under assembly 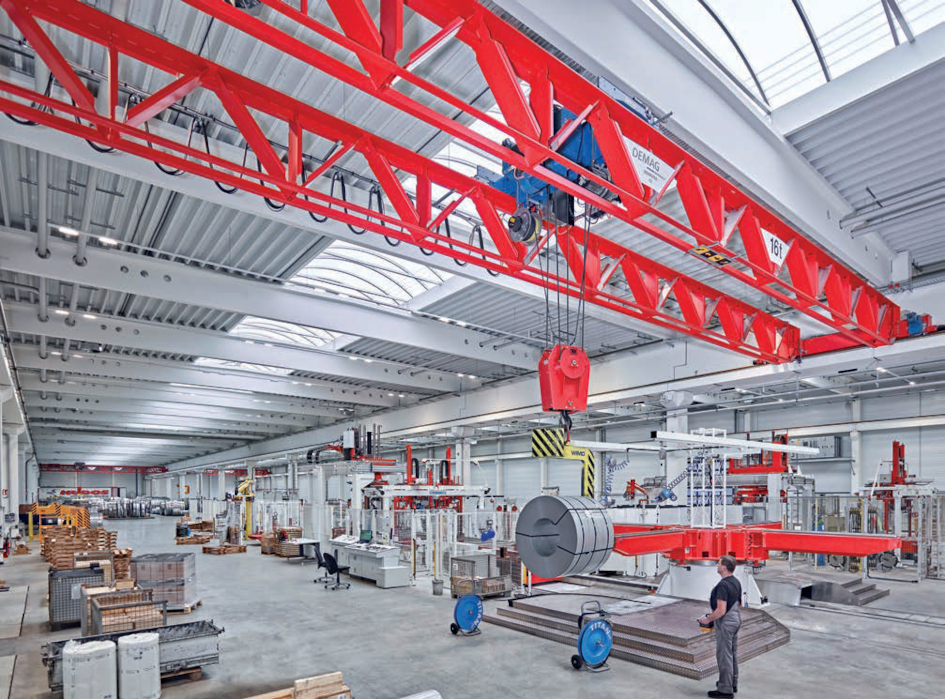 The Demag process crane lifting an aluminium coil with a hook.

The Demag process crane lifts a steel coil with a magnet, at the Stahlo plant