Breakbulk - Middle East 2023 Exhibition All You Need to Know

If you are involved in the movement of oversize and heavy-lift cargo, Breakbulk Middle East is the place to be.

Breakbulk and project cargo professionals are set to gather at the Breakbulk Middle East exhibition that takes place in Dubai’s World Trade Centre in February.

“Since inception, our sole purpose is to unite the industry and help them find solutions and develop strategies that will strengthen the UAE’s status as a global trade hub,” says Ben Blamire, event director at Breakbulk Middle East. “Through our 2023 edition we will work towards achieving this goal by initiating discussions on a wide range of topics and trends.”

Leslie Meredith, marketing director at Breakbulk Events and Media, adds that Breakbulk Middle East had always been at the forefront of showcasing the latest products and services in the industry.

“Apart from our trademark events – Education Day and Women in Breakbulk – this year we are looking at spotlighting technology and sustainability to a great extent. Our ultimate aim is to aid the UAE’s and the region’s economy, helping it grow from strength to strength.”

Exhibitors representing countries from all over the world and some of the biggest names in the business will be in attendance.

Abu Dhabi’s AD Ports Group will be one such company. Recent news from the firm includes the arrival of the first international shipment at Mugharraq Port. International recognition was achieved after a series of major upgrades, including the extension of the quay wall with additional berths and deepening the facility to 8m. AD Ports Group also installed the first 90t block for the quay wall of CMA Terminals’ new Khalifa Port. The terminal is expected to be operational in the first half of 2025 and will be managed by a joint venture owned by CMA Terminals (70% ownership) and AD Ports Group (30%). Finally, AD Ports Group has signed a memorandum of understanding with Adani Ports and SEZ, an Indian integrated ports and logistics company, “for strategic joint investments in end-to-end logistics infrastructure and solutions, which include rail, maritime services, port operations, digital services, an industrial zone and the establishment of maritime academies in Tanzania”.

Another company exhibiting at the show is the Philippines-based International Container Terminal Services (ICTSI). Its Manila International Container Terminal received a Green Port Award from the Asia- Pacific Economic Cooperation Port Services Network in the autumn of 2022. The Green Port Award programme recognises the high calibre and excellent environmental actions and leadership demonstrated by ports in the Asia-Pacific region and is valid for three years. The same terminal also got eight new Mitsui hybrid rubber-tyred gantry cranes (RTGs) for the container yard earlier in the year, to further improve operational efficiency due to growing volumes. Meanwhile, the company’s Subic Bay International Terminals business is due to deploy four additional RTGs to boost its landside operations and improve overall productivity due to the growth prospects of North and Central Luzon in the Philippines; the Mindanao Container Terminal, in Misamis Oriental in the southern Philippines, took delivery of two Mitsui hybrid RTGs in the spring of 2022; and the company’s Contecon Manzanillo business unit, which operates at the Port of Manzanillo in Mexico, is adding four new RTGs to its landside equipment fleet.

In Iraq, fellow exhibitor Basra Gateway Terminal handled its largest volume for a single month in May at the Port of Umm Qasr. The firm reached the 60,000 TEU mark and serviced 44 vessels – a record. Romeo Salvador, Basra Gateway Terminal’s chief executive officer, says: “This record is a fine example of excellent collaboration and effort by all teams. It reaffirms our commitment to Iraq’s economic development and our goal to support the country’s growing role in global trade.”

Meanwhile, the Port Authority of Kribi in Cameroon, which will also attend the event, is continuing extension works, having placed the first seawall caisson at a ceremony. The caissons will form part of the new berthing quays.

The cranes, which have a combined lifting capacity of 2,100t over a single drydock, are earmarked for shipbuilding activities.

The shipment, weighing a combined 18,128t was discharged at the nearby Ras Al Khair port, then loaded onto barges and shipped along the coast to a heavy-duty jetty close to the shipbuilding complex, which is still under construction.

The height and weight of the cranes had prevented overland transfer from Ras Al Khair to the installation site, a distance of just a few kilometres.

Almajdouie Logistics, which will be exhibiting in Dubai, faced a further challenge after discovering the highway from the jetty to the installation site was unable to bear the size of the cranes.

To overcome this, road widening and compaction were done with the help of the client, Almajdouie says.

A temporary storage area was prepared close to the jetty where the gantries were stored prior to final-mile delivery using self-propelled modular transporters (SPMTs). 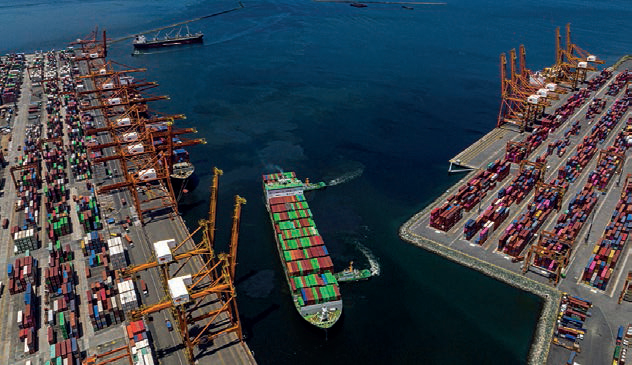 ICTSI‘s Manila container terminal – the winner of a green award 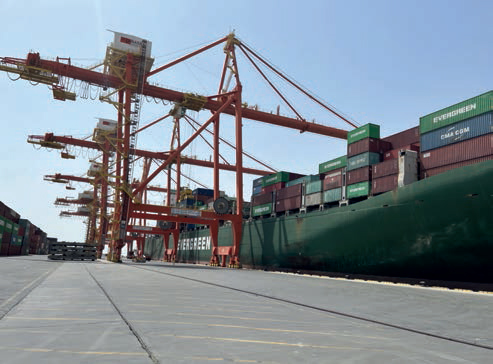 Basra Gateway Terminal has serviced a record number of vessels 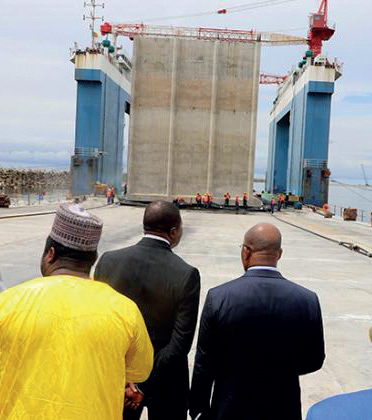 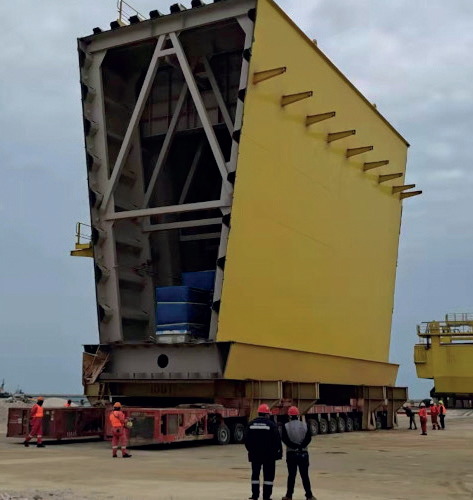