Load monitoring systems are part of the ever-increasing digital component of lifting technology. Julian Champkin looks at the latest developments.

Chris Scrutton is technical manager of DLM, Dynamic Load Monitoring, of Southampton, specialists in load measuring equipment. “There are many scenarios where the weight that is written in large letters on the side of a load is nothing like the real weight of the load,” he says. “Taking things at face value on a load is not sensible.”

In lifting, knowing how heavy the object might be is fairly fundamental. The days when load weights were judged by eye or by the light of experience are long gone. Load cells are now cheap and ubiquitous, and digital technology has supplied telemetry methods that do more than simply dispense with cables.

Nor are they simply devices that fit between hook and load and display the weight. Today load data is frequently just one element of the total data about speeds, accelerations, hours of use and the like that can be fed into automated control systems, and that can also be stored and analysed in whatever manner the end user requires.

Digital load measuring devices come in the form of load cells, load-measuring shackle pins, and also as compression cells, on which the load can be set down and its weight recorded while not suspended from the hook. Whilst the latter may seem less obviously relevant to hoist users, they too have their place in lifting operations—for example, when calculating load centre of gravities for loads that distort when lifted. When set down, the distortions generally disappear, so calculations of weight distributions on the ground can be more accurate.

“It is designed for under-hook and lifting gear weighing applications,” says Darren Skipp, Applied Measurements’ commercial director; “but these devices also lend themselves to measuring cable tensions and other in-line force-measuring applications. It is a load link that can hang between the hoist and the hook or below the hook, depending on how permanently the user wants it installed. It transmits its data wirelessly, so no cables are involved, which makes it quicker and safer; and wireless transmission opens up many new options.”

Several things are new, he says, about the series. It transmits its data through dedicated ET24 software to a handheld device, such as a tablet or smartphone, or to a PC. Once there, standard mathematical functions can be applied to it. “So you can display results as a graph, of loads against time.

“You can also combine results from more than one unit, and send the results to more than one device. So a customer might want a display for safety in the cab of a large hoist, for the operator to see, and, say, an identical display a hundred metres away in the office where managers can log the results.”

If sent to a PC the data can load into Excel; and there mathematical or trigonometrical functions can be applied to it. “So date, time, and average loads can all be displayed as standard,” says Skipp. But it can do rather more than that too. If a load such as a container is lifted by a sling attached to each corner, load cells can be inserted into each sling to measure the tensions. If the lengths or angles of the slings are fed in, the software can calculate the position of the centre of gravity of the load, thus ensuring a level lift. Data from up to ten units at once can be fed into the software.

Skipp gives the example of a bus manufacturing company, for whom knowing the centre of gravity is critical to vehicle design, to ensure stability while in motion. Two hoists lifted the bus, each using a spreader bar with webbing down to the wheels; ET24 load cells were attached to each corner of the bus to monitor the load and inclinometers were used to measure the angles. Once the bus was lifted, instantaneous measurements were picked-up by a T24-BSu wireless telemetry base station and the data was transmitted straight to the PC.

Applied Measurements also make shackle load cells—pins with telemetry load measuring devices incorporated—that fit onto standard Crosby shackles. “We replace the pin and add the electronics,” says Skipp. “The telemetry is exactly the same as for the load cells.” They come in capacity ranges for 12t to 400t.

Subsea products, the DDEN range, are also available; applications include measuring forces on winches, mooring lines and in wave-tanks. The company can also provide ATEX-certified load cells, though Skipp points out that the lifting system as a whole, not just the load cell, would need to be certified to work within an ATEX zone.

Load pins based on Crosby shackles are also offered by DLM. Theirs come in both wired versions and wireless. The company launched, in mid-November 2018, its TW-3.0 below-the-hook load cells. Dockside saddleback hoists are a particular suggested application. “When the load is picked up its telemetry will give an accurate reading of the load; it will transmit to a dedicated hand-held device up to 800m away, which is as good as you will get,” says Scrutton. “It can transmit to as many of them as you like, so the supervisor as well as the operator can see what is going on, and each hand-set can connect to up to 12 load cells at once.”

With these, as with other load cells, the reading given is, strictly, of the tension in the line rather that the weight of the load, so if the pull is not vertical the load reading will not be true. “Hoists like that do not happen too often,” he says, “but pay close attention to how you are rigging. Load cells are pretty important to being certain that the lift is safe but there are other elements to safety as well, such as ensuring the right size shackles. The element of safety that you need to maintain is a separate issue from the weight of the load.

“The TW-3.0 can monitor additional elements beside loads,” he says. “For instance, on a 5t hoist it would monitor any occurrence of an overload; a counter in the handset keeps a record and can inform you of the number of attempted overloads in, say, a month or a year. It might tell you, for example, ‘This hoist has tried 20 times to lift too great a load’. So you can infer a pattern that can assist in investigations.

“An internal audible alarm can be set, not just for overloads but for loads that are approaching the limit. So on a 10t hoist you could set the alarm for 9t, to make the operator aware that he or she should perhaps pay extra attention.

“The handheld receiver records all data four times a second, and has a USB port for transferring to a laptop or PC.” Here again, software can display the data as graphs or in other forms as required, and centre of gravity calculations can be done with the software. “USB data logging is a tool that people are using a lot: an audit trail is becoming more and more valuable, especially in the marine environment. Everyone wants proof of what has been done.”

DLM’s expertise in load monitoring for the offshore industry led to the development of a highly successful umbilical winch monitoring system. Designed originally for a large cable manufacturer for use in hazardous areas in the oil and gas industry, the system consists of a shackle load cell monitoring the load on an umbilical sheave, a local display in the hazardous area showing the load value in tonnes, several slave displays for other locations within the hazardous area, and also an audible klaxon. The system has been so successful it is now being offered as a standard option on new winch purchases, resulting in DLM manufacturing several systems per year.

“When any load is lifted wind, or loading due to acceleration or movement of the load, can quickly change the line tension, so electronic displays that read out instantaneously can jump around, sometimes many times a second,” says Scrutton. “So we put a rolling average into the handset, which can be set to time intervals of 4, 8 or 16 seconds.

“Our load cells have capacities from 1t up to 300t; the largest we have ever made is 500t. They are becoming more common.”

Niels ven der Bruggen, business development manager of Lifting Gear Hire [LGH], who operate in both the UK and Europe, also points to the importance of data records. “We have noticed over the last 18 months that loads are getting both much larger and heavier,” he says. “The requirements regarding lifting arrangements have also changed over the last few years. An increasing need for real-time data to ensure safety is one of the most technologically advanced developments, and we see more and more of this in the market. Wireless connections, strong Wi-Fi signals, user-friendly software and powerful computers are becoming more mainstream within the lifting industry. That affects the way we work and the equipment we use. It is not a replacement to previous methods but an addition. For us at LGH, safety is the most important part of our work, so we welcome everything that contributes to ensure a safe lift.”

Hampshire-based load cell manufacturers Straightpoint point to a new requirement whereby shippers are now legally required to declare the weight of shipping containers before they are booked onto a ship. The idea is to avoid potentially disastrous situations, of listing, loss of cargo and worse, which can arise when a container ship is overloaded.

“The new SOLAS requirements have meant shippers, packers and logistics companies are looking for simple ways to integrate container weight information into their current processes,” says David Ayling, Straightpoint director. “At Straightpoint we believe the simplest and fastest way to capture this weight information is when the container is lifted. This can be done using a load link or load shackle used in conjunction with our datalogging software for reporting.”

Straightpoint has recently updated the Bluetooth ability of its load cells and has launched an enhanced version of the accompanying app. Again, collected data can be sent to other recipients in the form of Excel spread sheets, or a PDF report. Their Radiolink Plus comes in two versions, the lng range 2.4GHz version providing a wireless range of 700m to a handheld device, or with Bluetooth output that can be connected to any smart phone running the relevant app. The range for this version is up to a 100m.

Load cells and their closely-related sister products are now an integral part of lifting— and hoist machinery with the capability of load monitoring will continue to be increasingly demanded by customers. 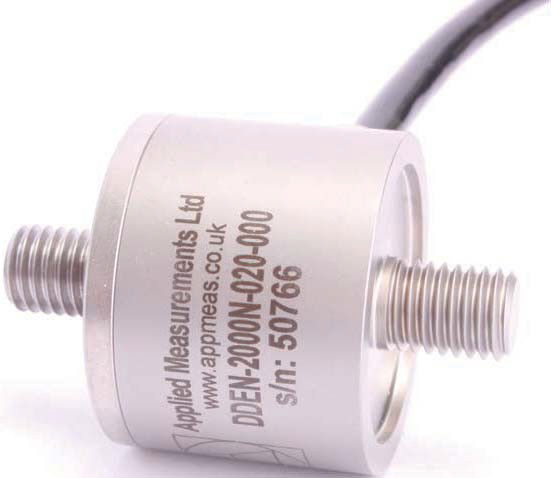 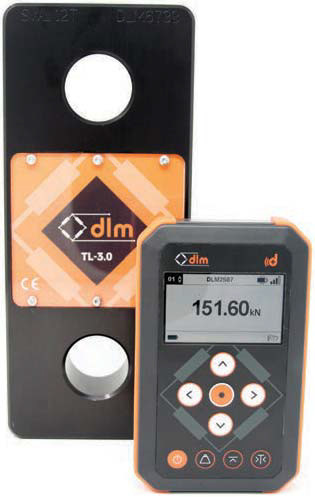 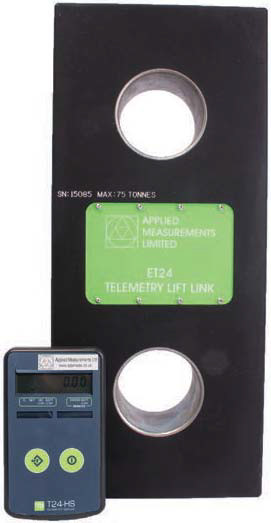 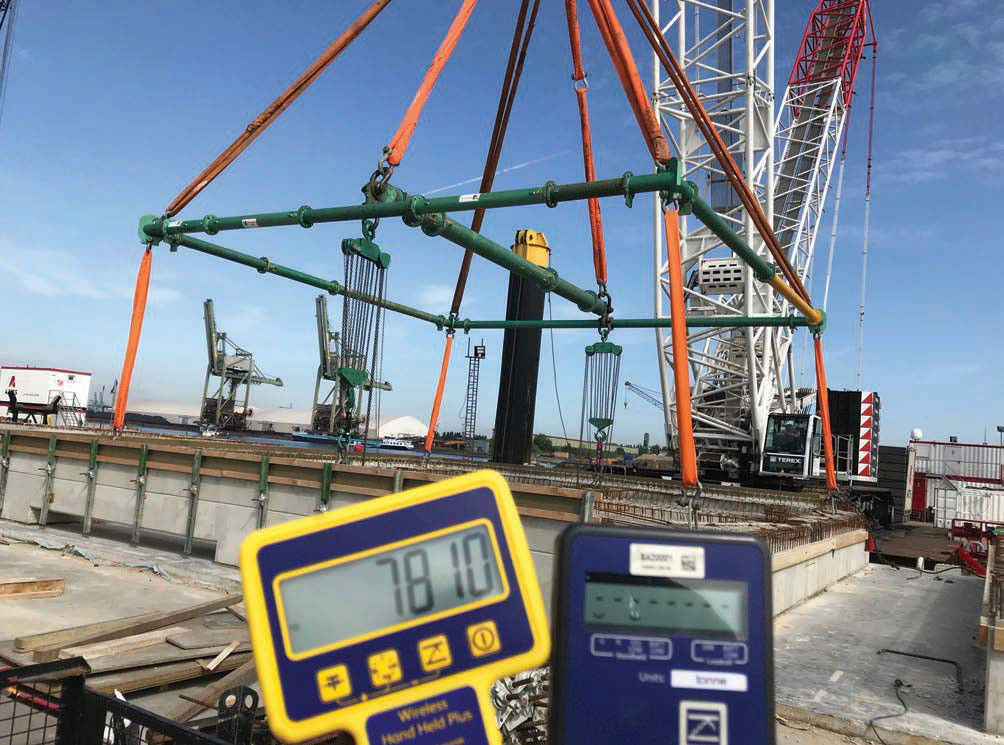