Brazil’s economy is struggling but there are some bright spots and the overhead lifting equipment sector is ready for the upturn. Keren Fallwell reports

Brazil is South America's largest economy but this powerhouse is on the brink of delivering its worst economic performance since 1990.

Lack of growth has plagued the country for the past five years and in the first quarter GDP fell by 0.2% - the worst result for six years.

In its quarterly report published at the end of June, Brazil's Central Bank forecast GDP to fall 1.2% this year - a gloomy revision of its earlier expectation of a 0.5% decline - and raised its inflation forecast to 9%.

In an attempt to stem the slide of the world's seventh largest economy by GDP, the government has introduced austerity measures, freezing USD 22.6bn in spending from the 2015 budget, and the Central Bank has steadily raised the benchmark interest rate to the current 13.75%. The revised forecasts mean another interest rate hike is likely.

Although in May industrial production grew by 0.6% - the biggest growth in 10 months - the annual average growth fell from -4.9% in April to -5.3%, the lowest level since December 2009. Annual average growth has been on a downward trend since March 2014. Motor vehicle manufacturing has been hit the hardest, with output falling 18% this year, but production of coke, oil and biofuels has also fallen significantly.

Not surprisingly, business confidence is taking a battering. According to the Getulio Vargas Foundation business confidence indicator, in June business sentiment reached its lowest level - 68.1 points - since October 2005, having fallen from a previous record low of 71.6 points in May.

It's a bleak picture but economic analysts LatinFocus Consensus Forecast say industrial output could increase by 1.6% next year.

According to Timetric's recent report Construction in Brazil - Key trends and opportunities to 2018, in 2013 industrial construction was Brazil's third largest construction market and, at USD 25bn, it accounted for 12% of the total industry value. Timetric forecasts that industrial construction will record a compound annual growth rate of 9.7% to reach USD 32.9bn by 2018. The growth will be driven by expanding industrial activity, particularly by the automotive industry and manufacturing plants, and recovery in the global economy.

Infrastructure construction was the largest sector in the construction industry in 2013, accounting for 52.7% of the value. In recent years it's been boosted by government initiatives and preparations for the 2016 Olympic Games, to be held in Rio de Janeiro. Timetric estimates that in the lead-up to the sporting event USD 11bn will be spent on the construction of stadiums, airports and roads and the extension of telecommunications and electricity networks.

In June President Dilma Rousseff announced a further boost to infrastructure with a USD 65bn package aimed at stimulating the flagging economy. The package involves selling to the private sector new concessions to build and operate nearly 7,000km of roads, as well as four large airports and several ports and railways.

In 2013 Brazil accounted for 54.8% of Latin America's USD 7.4bn cranes, lifting and handling equipment market so the government's stimulus plan is good news for overhead lifting manufacturers and suppliers. According to Street Crane's Latin America salesman, Victor Saucedo, it is a continuation of earlier measures.

"Despite a faltering economy, Brazil is making unprecedented investments in infrastructure under the Accelerated Growth Program and the Logistics Investment Program," he said.

Over the past five years industry had also been helped by a series of market reforms, including steadily declining interest rates, lower electricity prices, improved access to finance, a reduced tax burden and improved logistics as a result of infrastructure investment.

The construction industry had also remained robust thanks to a growing domestic market, favourable government measures and strong economic growth in the mid-2000s.

The need to improve Brazil's infrastructure is one reason for GH Cranes & Components' long-term optimism about the country's potential.

"Brazil is South America's biggest economy and, despite the recent slowdown, will continue to grow because it needs to improve its infrastructure and technology to modernise the country," said marketing manager Garbiñe Guerra.

GH, a Spanish company, has had a presence in Brazil for 15 years. Its manufacturing plant in the state of São Paulo has an annual production capacity of 300 cranes, making it, the company says, "one of the most important in South America".

GH was working in sectors crucial to Brazil's economy, such as automotive, aviation and public infrastructure, said Guerra.

The economic uncertainty meant some companies were tempted to extend their equipment's service life, although those "competing with first-class companies from elsewhere in the world know that their productivity and future profitability depend on having the best possible equipment", she said. For Street Crane, which has a stock distributor in São Paulo, mining, oil and gas, hydropower, aviation and agriculture are positive sectors but it has noted a downturn in demand from the manufacturing, automotive and metalworking industries. Construction projects for next year's Olympics have also provided good business.

"We've seen a marked interest in enquiries for infrastructure projects, especially in the last 18 months, related to the modernisation and construction of stadiums and other sports venues throughout the country," said Saucedo. He added that Brazilian customers were now better informed about the criteria for equipment inspections and maintenance procedures.

"Industry is also knowledgeable about the average lifespan of bearing components and more conscious of the lifetime cost of ownership of a crane or hoist. This enables them to make more educated decisions about when to fully refurbish or replace equipment," said Saucedo.

Increasing government protectionism and volatile exchange rates meant Brazil had always been a challenging market but Street Crane remains ultimately positive about business in the country. Although the economy is unlikely to undergo any significant recovery in the next few years, the company is positive about the market's potential.

"Despite the trying times the Brazilian economy is currently going through, as an emerging economy Brazil faces structural challenges that are business opportunities in themselves," said Saucedo.

Street Crane would continue to "hold its ground" in Brazil and was confident that its efforts to grow market share and revenue would pay off once the economy recovered.

Until now, Chinese overhead lifting manufacturer CLES has not been involved in the Brazilian market but has decided the downturn is the right time to establish itself to be ready for when the recovery comes.

"While some other crane suppliers are adopting a wait-and-see attitude to Brazil we've decided to enter the market and develop a marketing strategy," the company said.

Brazil's high import tariffs could be a disadvantage but CLES was confident its products would find sales across a range of sectors.

And although Brazil's economy is struggling, Timetric identifies some major commercial investments in Brazil, which are potentially opportunities for overhead crane manufacturers.

The business analyst says a liquid and gas terminal at Praia de Jacone in Rio de Janeiro is in the planning stages. It will have the capacity to handle 850,000 barrels of oil a day.

In the port complex of Pecém, in Ceara, construction of a USD 44m cement grinding plant is due to start in October and be completed by 2017. It will have the capacity to produce 900,000 tonnes of cement a year.

Planning is also under way by Chinese company Sany Group for a USD 300m, 560,000m2 construction machinery assembly plant in São Paulo. Sany and the Brazilian government have signed a Memorandum of Understanding and construction could start later this year.

The state of São Paolo is also the location for a new locomotive production plant. Construction started in October last year and is due to be completed in 2016.

Meanwhile a steel tubes manufacturing plant in Serra, Espirito Santo, is awaiting environmental approval. Construction of the USD 100m project is expected to start in the first quarter of 2016.

International drinks giant Coca-Cola is expanding on several sites in Brazil. It recently opened a new 2.1 billion litre capacity plant in Itabirito, in the state of Minas Gerais, and construction of a new, 1.2 billion litre capacity plant is under way at Duque de Caxias in the state of Rio de Janeiro. The plant is expected to be operational by the end of this year, in good time to meet the anticipated increase in demand during the Rio Olympics.

Coca-Cola is also considering expanding a beverage production plant in Cariacica. The investment would increase annual capacity from 350 million litres to 500 million litres

Little over two years ago, the world's largest Goliath gantry crane ordered by Engevix Construções Oceânicas ('Ecovix') arrived at its destination in Rio Grande do Sul in southern Brazil.

Konecranes received the crane order in October 2011. In its combination of lifting capacity of 2,000 tons and rail span of 210 meters, the crane was the biggest Goliath gantry crane in the world. The machine was ordered to assemble eight hulls of Floating Production Storage and Offloading (FPSO) ships that will be used for offshore oil production projects.

Construction of the crane components began in October of 2011, in Finland and South Korea.

Installation at the Polo Naval do Rio Grande shipyard took place at the end of 2012.

The Ecovix president said at the time: "With the installation of the Goliath gantry crane we will contribute to the productivity of the Polo Naval do Rio Grande shipyard." 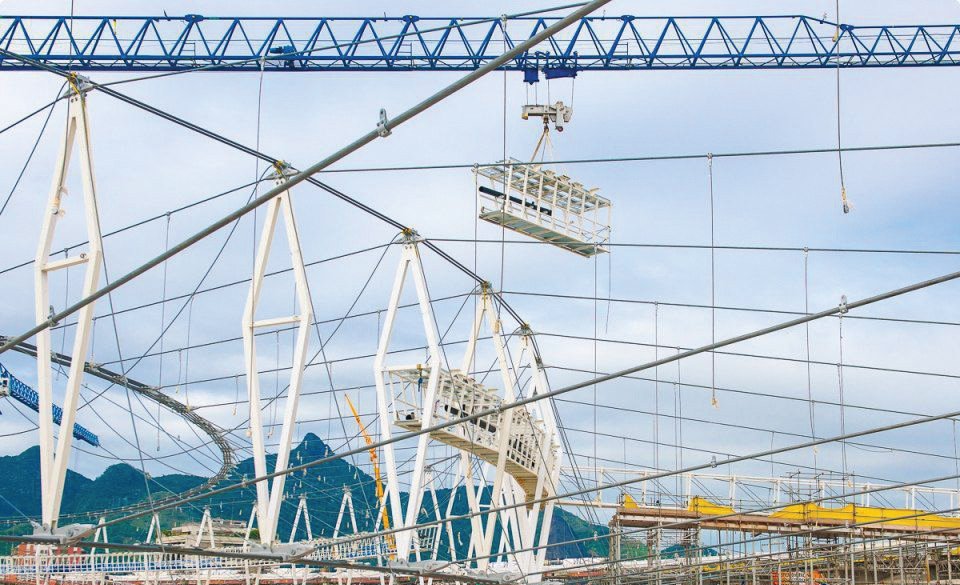 Construction is taking place at a fast rate 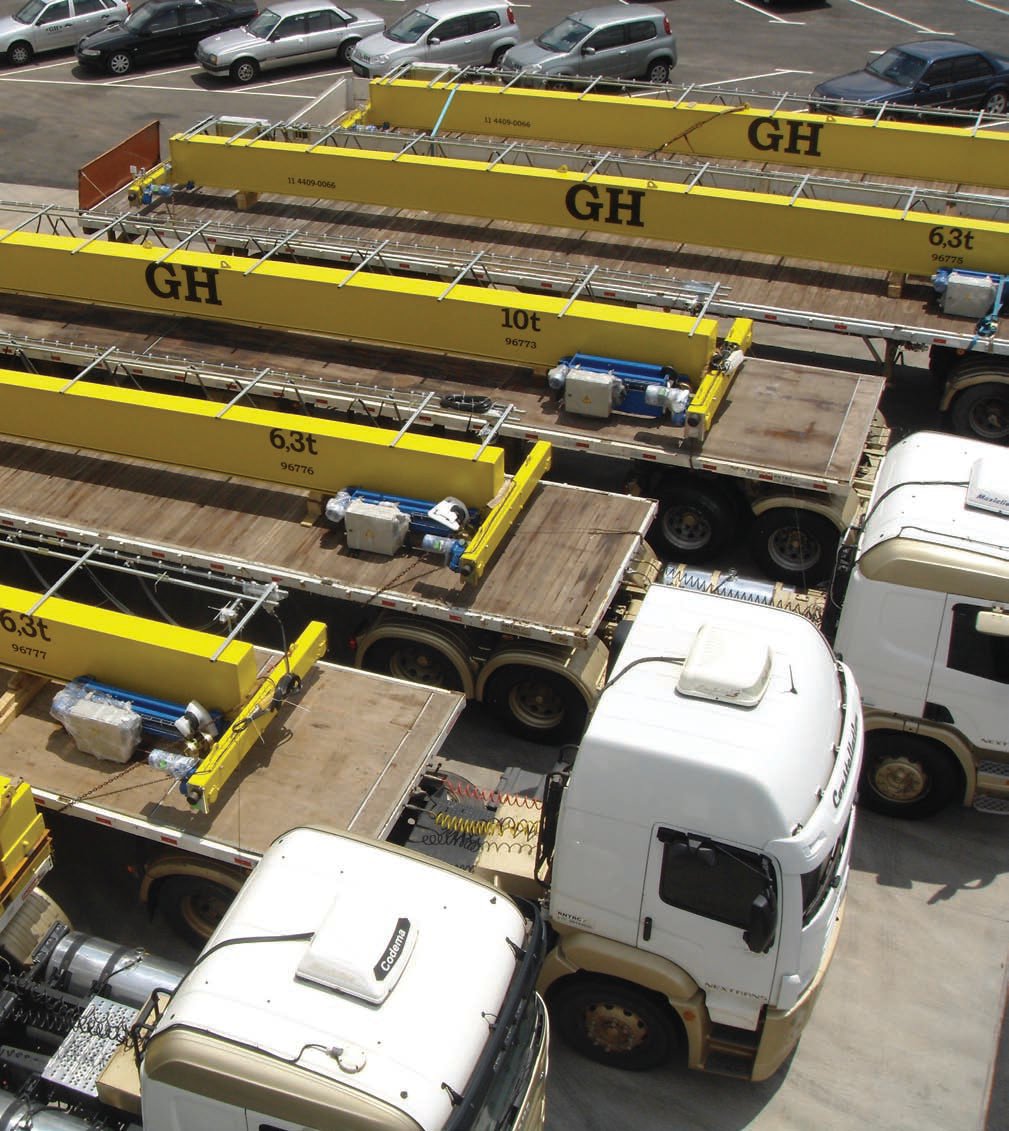 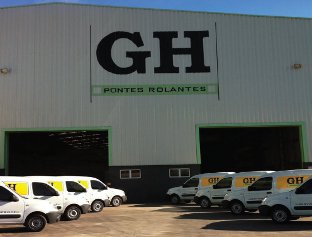 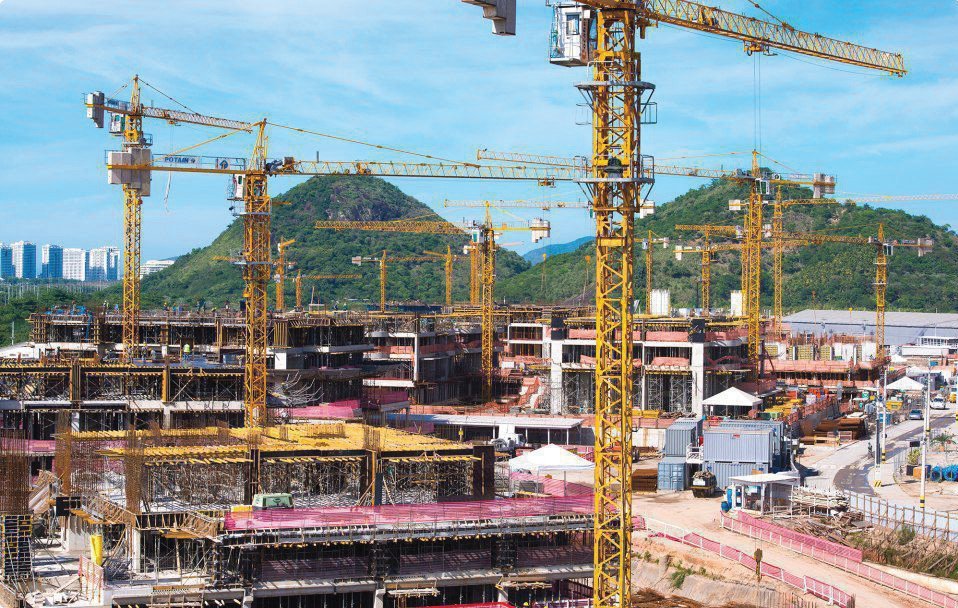