The Kuwait-based heavy-lift specialist was called on by a bridge contractor to perform a delicate lifting operation of a 200t steel girder to support a bridge span.

The bridge, near Kuwait City, is one of a number of bridges being built as part of the State of Kuwait's road expansion project.

Increasing immigration and economic growth have necessitated improvements to the highway network to reduce congestion and help commuters travel faster to their destinations. The new roads will also facilitate the growth of interregional and international trade with the Gulf Co-operation Council countries.

Integrated Logistics Company specified its Terex AC 1000 and AC 500-2 all terrain cranes for a tandem lift due to the length of the beam. Manoeuvrability on the congested jobsite and surrounding area were key considerations.

The eight-axle AC 500-2 with 56m boom and nine-axle AC 1000 with 50m boom were driven from Integrated's yard to the project site with the boom installed to shorten set-up time and save money. The counterweights were installed and cranes rigged ready for lifting in just one day.

Twenty flatbed trailers transported 388t of counterweight and accessories to the site over two days, with Terex's standardisation of the weight and shape of segments meaning the same counterweight work on either crane. The AC-100 1,200t capacity crane, carrying half the beam load, was rigged with 228t of counterweight and a 250t hook block. A 25.8m main boom length at a 9m working radius was used for the initial lift of the 4m high/2m wide beam. For installation, the AC 1000 lifted the beam to an 8m height at a 17m radius.

Christian Kassner, senior manager sales and customer suppor t for Terex Cranes, said: "Even with the weight of the beam at this radius, the AC 1000 crane was at less than 73% of safe working load (SWL).

"Our counterweight design allows the same weights to be used on all our superlift class crawler cranes as well as all terrain crane models ranging from the AC 350 to the AC 1000. This reduces transportation costs and simplifies counterweight logistics."

The whole beam-lifting project, from crane dispatch to retur n to Integrated's yard, took less than a week.

Integrated's CEO Saleh Al Huwaidi said: "We chose to use mobile cranes for the project since they are better for a single lift.

"After studying the lift's requirements, we immediately knew our Terex AC 1000 and AC 500-2 all ter rain cranes were the right machines for the job.

"They have the capacity needed to safely install the beam, and they are quickly driven to the jobsite and are very maneuverable."

It also has business hubs in Qatar , Saudi Arabia, Bahrain and the UAE, employing more than 2,500 people. According to Terex, its nine-axle AC 1000 is the world's most powerful all terrain crane, which can travel on public roads with its 50-m (164-ft) main boom attached.

Specified at 20.3m in length, the AC 1000 is pitched as "remarkably compact and maneuverable" for a machine that weighs in at 1,200-tonne. The T erex systemcan travel with its main boom on public roads to nearly any location in the world and has the "fastest setup times of any crane" in its categor y, owing to its luffing jib erecting system. 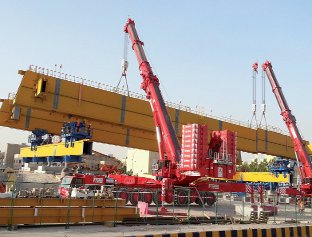