Overhead cranes may seem simple to operate, but mistakes and accidents can happen. Julian Champkin looks at training for operators.

Hoists, overhead cranes, gantry cranes: call them what you will, they are in almost every factory and processing plant, sometimes by the dozen. They seem simple in concept, which they are; and correspondingly simple to operate, which is true only up to a point. “There is more to it than just picking up a load and moving it,” says Larry Kime, subject matter expert from the US-based training provider Crane Inspection & Certification Bureau (CICB). “People think all there is to operating an overhead crane is up, down, sideways and stop,” says Paul Mackley, industrial training unit manager at Didac, a UK training company. But it is not just the controls: it is the weight behind it, the load, and the way that the load behaves.

And they can be as small as a handoperated chain hoist, and as big as an overhead gantry crane on 25ft rails moving massive containers off railway wagons that the operator can only see through the glass floor of the cab he is sitting in that is mounted 85ft up in the air. “We took over a job like that recently,” says Mackley. “The previous trainer, from another company, had had a panic attack and left, it was so high.”

Even on small hoists there is a lot that can go wrong; and the accident statistics for overhead cranes are surprisingly high. “It is not a massively difficult piece of equipment, but a crane is no less dangerous than any other machine in hands of an unskilled operator.” Which is why, he says, everyone needs training.

Many companies, on both sides of the Atlantic, offer training courses for overhead crane operators; and the demand for them is surprisingly high, and consistent.

“Overhead is big for us,” says Jonah Hobson of Industrial Training International (ITI). Larry Kime at CICB says: “What most people don’t know is that much more of our training is for operators and riggers on overhead cranes than on construction cranes.“

There are reasons for both halves of that statement. Construction cranes are highly visible, seen on every building site. Hoists are inside warehouses and plants; the public hardly see them.

“But work out roughly how many overhead cranes there are,” he says. “One of our clients is a plant that makes locomotive engines in Pennsylvania. That plant alone has 3,000 overhead cranes and 5,000 people who operate them. And that is just one plant. Another of our clients employs 50,000 people, where they manufacture aircraft and the like. That makes for a huge number of overhead cranes. It way exceeds what everyone sees in the construction industry.”

“A big trend we see is that the industry is not realising that a crane is one tool among many,” says Kime, “and using it is a specific application of a tool. It assists a craftsman to do his or her job; but that craftsman is primarily a millwright, or an engineer, or a machinist. He operates the crane, but for him the crane is also the tool that lets him move the object into place and position for them to work on it and then move it on afterwards to make space for the next task. So the job description of ‘overhead crane operator’ is not a usual one, nor is it usual now for someone to do that job full-time. It is an adjunct to primary skills and tasks.”

Nevertheless, training in using them is vital. Health and safety is one obvious reason; insurers requirements are another. “We have had numerous clients training with us because there has been a mistake or a near miss and they don’t want to see it happen again,” says Kime.

Sheer economic common sense is a third motivation for employers. The value of the load being moved can frequently be immense.

“Last week we went to a company that makes turbines, to give their operators a training course,” says Mackley. “They said, please do not use that load to practise on; it cost £1.2 million. Dropping it would have been catastrophic. Similarly, a world famous museum wanted to move a unique Mayan canoe over a gangway. The object was light, but priceless. Their contractors could not get insurance coverage to move it, so we trained the museum’s own staff.”

“Another trend that we are seeing is that people are recognising that experience is not enough,” says Kime. “People need refresher courses every two to three years. It is not a regulatory requirement in the US, but the recognition is growing.”

Other regulators around the world also often recommend refresher courses every few years.

“The clients, and the operators, want to be skilled on the particular machines that they will be using,” says Tyrone Maclean, sales executive of Construction Training Providers. “We prefer to train on their own

equipment, with their own loads and their own rigging type,” says Kime. “That is always more effective. There are so many variables that training has to be on site to be useful.”

When we visit a client’s site we first look to see what they do and how they do it,” he adds. “People don’t know what they do not know. We will give them an audit in which we explain, in writing, what we do and what they could or should be doing. Are processes or procedures going on that do not match regulations? Often it is not the rigger or the crane operator who is at fault, it is the management not realising its responsibilities.” Those responsibilities are, fundamentally, for everything that might happen on their premises with their equipment; liability cannot be avoided by sub-contracting. CICB’s director of sales Billy Cook adds:

“We ask management: Is it worth $15,000– 20,000 for us to come in and look, to let you let know what we see as a deficiency, if any, and offer recommendations on safety of your loads and of your employees?” “In the UK, employers of crane drivers, lifting equipment operators and slingers have a duty under the Health and Safety at Work Act 1974 to provide appropriate training for their employees,” says Will Dunn, of training providers Lifting Equipment Store. “And training may help employees meet their obligations to take reasonable care of themselves and others.”

“Part of the value of what we are providing is we tell the managers that it is not about getting the right bit of paper; it’s about being safe, knowing what you are doing,” says Mackley of Didac. “Those are by no means the same thing. If all you are after is the paperwork, please go somewhere else.”

Courses tend to last a few days. “The minimum is two to three days,” says Kime. “Four to five days for a novice,” says Maclean, “but people with experience or on refresher courses need less.”

Training courses cover both practice and theory. “On arrival at a site the first thing we do is look at the crane, its accessories like rigging straps and so on, and at what the client actually lifts. We take a very good look to see that the crane is safe,” says Mackley. “If something is wrong on the crane and easily remediable, we go off and do the theory elements while the crane is being fixed.

“Theory takes a minimum of around two hours and covers basic health and safety. Everyone, novice or experienced operator on a refresher, gets the same theory; with novices however, we go into it in more detail.

“With experienced operators we do it because people can fall into bad habits and also at the end there is an assessment that we have to do that includes a theoretical examination. It’s like a driving test: You may have been driving a car for years, but there are always new bits in the Highway Code.

“Then, with experienced operators, we watch them at work.

With novices, we start with very basic usage, with nice uniform loads for safe procedures and movement. Then we move to trickier loads, unbalanced, with high centres of gravity or hard to sling. We tailor the course to the facility. We ask the facility to provide the loads for us to lift, since those will be what the trainee will be lifting in his work.

“The accrediting bodies have designed manoeuvring routes, mazes if you like, defined by pallets on edge or barriers. The trainees have to take the load through them and set it down within a specified area. They need to take the swing out of loads. Older cranes do not have sway control, and their lever controls may be jerky rather than smooth. Cranes differ in their control systems: they may be remote, or by lever, or button or joystick, so if there are many cranes on the site we use them all.”

“Digitalisation and remote control are changing what people need to know,” says Kime. “It used to be direct control: you move a lever, the crane moves.

Now you move a switch and a computer programme decides the speeds, the stopping distance, whether it is safe to move it that way. It makes the crane easier to use, but it also makes it less intuitive. The operator no longer has a feel for how the crane is moving. That makes it less precise, or at least less precisely obedient to the operator and his commands. It took longer to train on the old cranes but at the end of it, man and crane were in tune. “For a lot of operators nowadays the closest they get to the crane is the remote control. They don’t see or feel the thing above them up under the roof.

“During a recent visit at a customer’s site, the operator was not a young guy, and not a slim guy; he was using a remote control with levers, in a box slung on a belt round his neck to hang at waist level, and the crane was doing things that he wasn’t telling it to. When we watched him, it turned out that when he leaned forward his belly was pushing the switches. They had to re-design the control box to correct the issue.”

Didac charges a daily rate for the instructor’s time, regardless of how many he is teaching, so a class of four would work out economically. “It is not silly money” says Mackley, “and it is certainly not silly when you compare it to the potential cost of an accident. Training isn’t going to break the bank; but an accident might.” 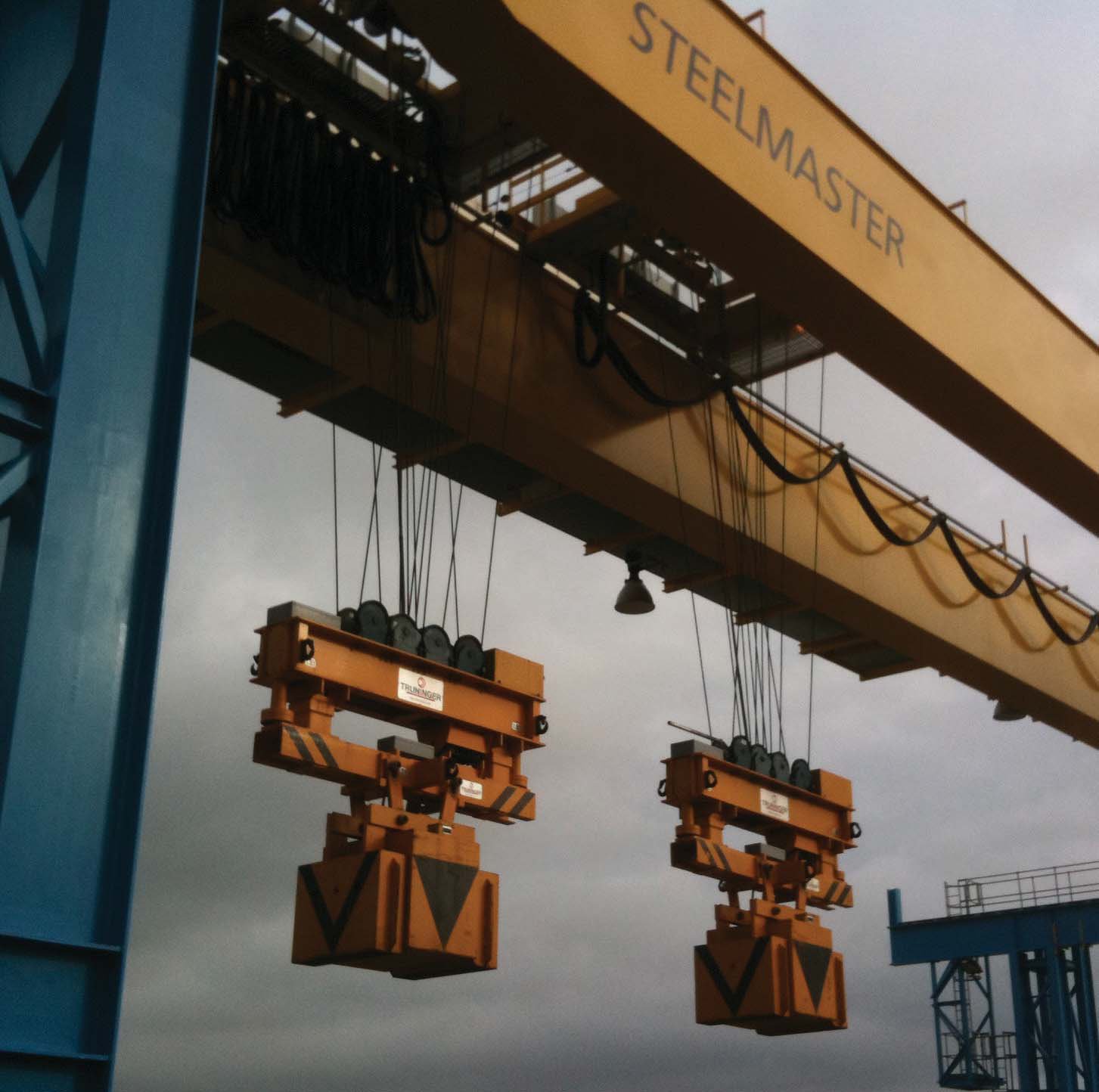 Didac provided operator training to a large steel company at a shipping dock. The crane uses magnets to pick up the loads. 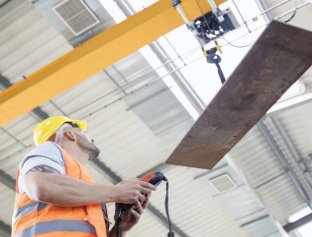 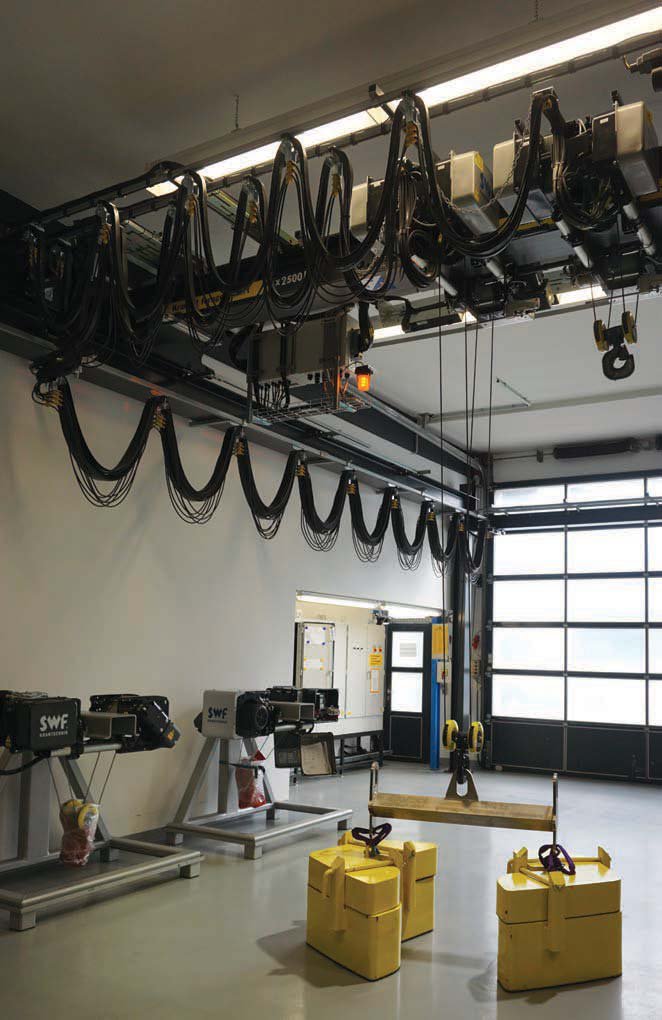 SWF Krantechnik has a training facility at its premises in Mannheim, Germany where customers can be trained to use the company’s cranes.