This month, Hoist takes a look at a selection of the latest offerings for tougher applications, whether aimed at operators using cranes in exposed or outdoor environments or for heavy-duty jobs requiring a high work rate.

An extremely lightweight unit, weighing just 375g, the Ares E was initially designed for outdoor use with forestry winches. The Ares E transmitter does not feature any joysticks, but it can be equipped with a range of push buttons, selector switches, rotary switches and potentiometers as the customer requests for whatever the application demands.

Despite the small unit size and light weight, it still manages to encompass a maximum of ten positions for buttons and switches in addition to the STOP function button.

With three buttons on either side of the Ares E, all of the unit's controls are still easily accessible while hanging from the operator's belt, and maintaining reasonable spacing between the buttons and switches to guard against accidental operation.

The Ares E, as the name suggests, is fitted with an A/U category PLe (ISO 13849:1) SIL 3 (IEC 62061) STOP function, with IMET having been awarded TUV certification for SIL3 in February this year.

An IP65-rated housing protects the components of the Ares E handset against external conditions such as water and accidents such as dropping the handset.

The handset is capable of working in temperatures ranging from -20°C to 70°C and has a maximum working range of approximately 150m.

IMET designed the Ares series to be fully capable of being paired with every receiver in the firm's range, so the Ares E is compatible with the full gamut of IMET recievers using CANbus and CANopen protocols or using standard on/off and proportional outputs.

The handset uses encoded signals to prevent interference with any other radio signals in the area, and can switch across 30 different transmission channels.

It also incorporates an internal diagnostics system that can act as a safeguard against potential failures leading to dangerous situations.

The Ares E is powered by removable rechargeable Ni-MH batteries, which allow the remote to operate for 22 hours of continuous use.

It also features an automatic switch off function to extend the battery life whenever the handset is left idle for longer than three minutes.

NBB Controls and Components
While some of NBB's wide range of products, such as the Planar series, has recently been updated to include surfacemounted joysticks, NBB has also recently released the new HyPro Series of transmitters suited to industrial and mobile hydraulic applications.

NBB's HyPro 8 features up to eight single axis, proportional or stepped NBB joysticks, which the firm says feature exact switching steps on patented grids allowing a wide range of movement.
However, the firm also offers the HyPro 6 controller with six single axis joysticks, which features a bellow designed to protect the joystick when used for more rugged applications.

These joysticks on each controller are connected to the transmitter body using surface-mounted joystick technology, and this allows the easy exchange of the joysticks for replacement, in the event of damage or a fault, without requiring opening of the transmitter housing.

Transmitters in this series can operate across 147 HF channels, although this is reduced to 110 channels within Europe, and feature an automatic LBT frequency search.

The HyPro series includes a 47mm x 27mm display that has a 128 x 64 pixel resolution, but the transmitter also has the option to include other feedback data.

Designed with what NBB says is a compact, ergonomic and robust housing, which features an integrated antenna, the HyPro series is IP65 rated for protection against environmental conditions.

Its battery is also locked inside the transmitter housing to avoid accidental removal if the controller is dropped or suffers a sudden jolt. One charging cycle of the two AA rechargeable batteries provides enough power to provide HyPro series transmitters with up to 40 hours of working time. NBB provides a 7.2V rechargeable batteries and a battery charger as optional extras.

As with the HyPro series transmitters, NBB's Planar-NL also features up to 3 dual-axis surface mounted joysticks.

The controls manufacturer says that all radio remote controls and pendant remotes that NBB produces are compatible with a range CANbus interfaces, including CANOpen and J1939, as well as Profibus, RS 232 and RS 485 protocols. The firm also claims that other more custom protocols present no problem for NBB's products.

Penny & Giles
Penny and Giles has launched a new heavy-duty electronic joystick that can be used for hard-wearing applications that traditionally use hydraulic joysticks. Described by the firm as a joystick with high-strength features, the JC8000 is suited to physically demanding jobs on construction machinery.

The body material around the area that supports the operating lever has been strengthened to increase the lever's diamater and alter its pivot geometry. As a result the joystick can cope with increased torque, conveying higher bending and applied load limits on the joystick.

This design means that the joystick can handle 380Nm of overload on its X and Y axes, as well as 2000N on the vertical.

Despite this, Penny and Giles says that the JC8000's under-panel depth of 70mm makes it a very compact joystick compared to many of its rivals' equivalent heavy-duty joystick products. Available with single or dual axis control, for accurate motion detection on the JC8000
12bit Hall effect sensors are used. A range of eight handle options are also available to suit each application.

The electronics are protected against harsh working environments by IP69K sealing, and as a result the joystick can operate in temperatures from -40°C to +70°C.

Commenting on this, vice president of Penny and Giles parent company -- Curtiss-Wright avionics and industrial group -- Kevin Rayment said: "The JC8000 is designed to survive in environments that are more physically demanding than the performance limitations of competitors' heavy-duty joystick controllers, and even our own JC1500 and JC6000 controllers."

Part of the company's confidence in the product comes from the fact that it has been tested, under laboratory conditions, to over 15 million cycles.

Customers have the option of using the joystick with a 5Vdc regulated power supply or a 54Vdc unregulated supply, with digital pulse-width modulation to control the power supply.

REMdevice
Italian manufacturer REMdevice's latest remote control products, the Brick DL and the DL Pail transmitters, share many of the same basic features but with enough differences to suit a range of applications.

REMdevice's DL Pail is a joystick remote with three switches and two joysticks for operator control along with a digital readout for feedback and an EN ISO 13849-1 PLd-compliant emergency STOP button.

Each DL Pail handset includes an automatic inter-blocking feature for the joysticks to prevent conflicting commands resulting in the crane performing manoeuvres unsuitable for the application, such as simultaneous 'left' and 'right' commands.

Although the Brick DL is a double-step pushbutton transmitter, it shares the same underlying electronics as the DL Pail, and as such operates with the same 100m range across 11 channels on the 869MHz frequency, or 59 channels on 433/434MHz.

It features ten pushbuttons as well as the STOP button and digital display found on the DL Pail. This screen can be used to display feedback data from a strain gauge on the hook giving the weight's load. Another feature shared by the two transmitters is that they can be set up for twin crane operation and master/slave control of the same crane with different transmitter units.

REMdevice has designed the Twin System to comply with EN 60204-32 when using two transmitters and one receiver.

Both DL Pail and Brick DL controllers are fitted with a power-saving automatic switch off function that activates after four minutes of inactivity, and use a sealed charger base unit -- via a patented induction charging system with no battery contacts -- to receive and maintain enough power for 35 hours of continuous use.

Environmentally protected to IP55 ratings, the DL Pail and Brick DL transmitters can work in temperatures ranging from -20°C to 70°C, with the sealed base charger allowing its use outdoors.

With a small number of core components contributing to low weights of 470kg and 500g respectively, the manufacturer says replacement parts for the Brick DL and DL Pail handsets can easily be made available when needed.

And having recently appointed UK supplier GB Remotes with an exclusive contract for sales of REMdevice products in the region, the handsets are now also available in the UK and Ireland. 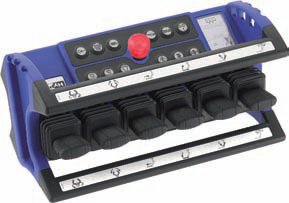 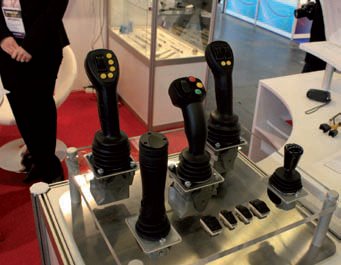 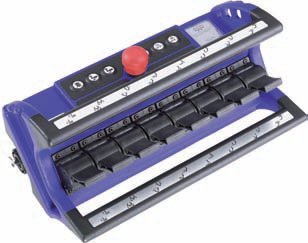 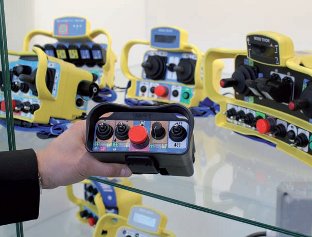 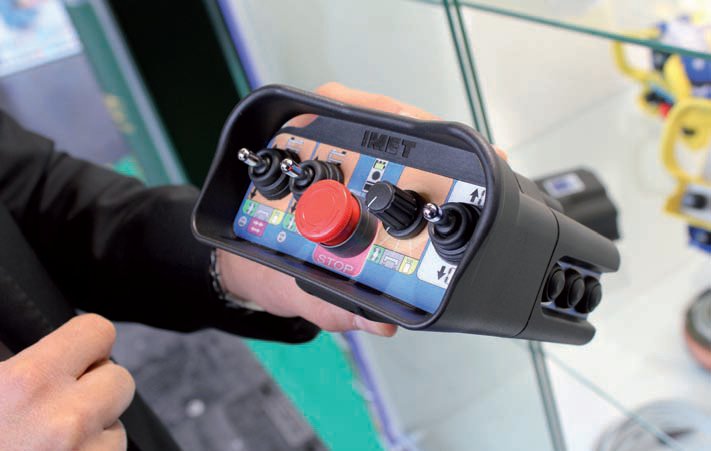 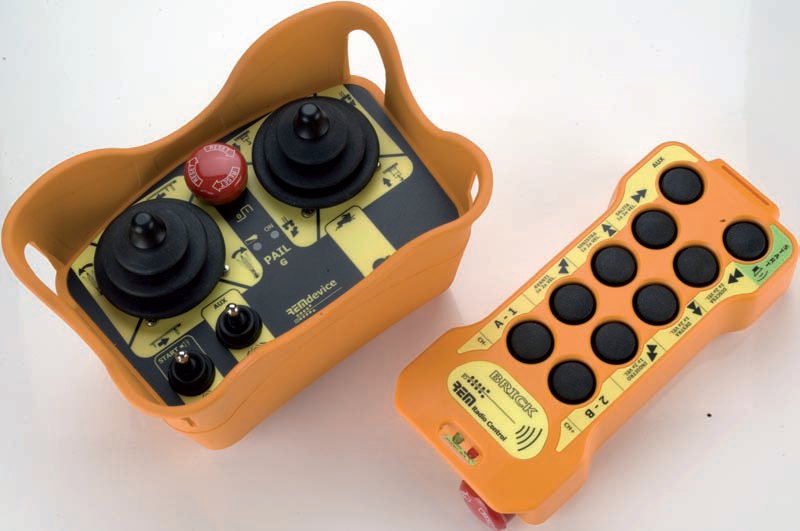 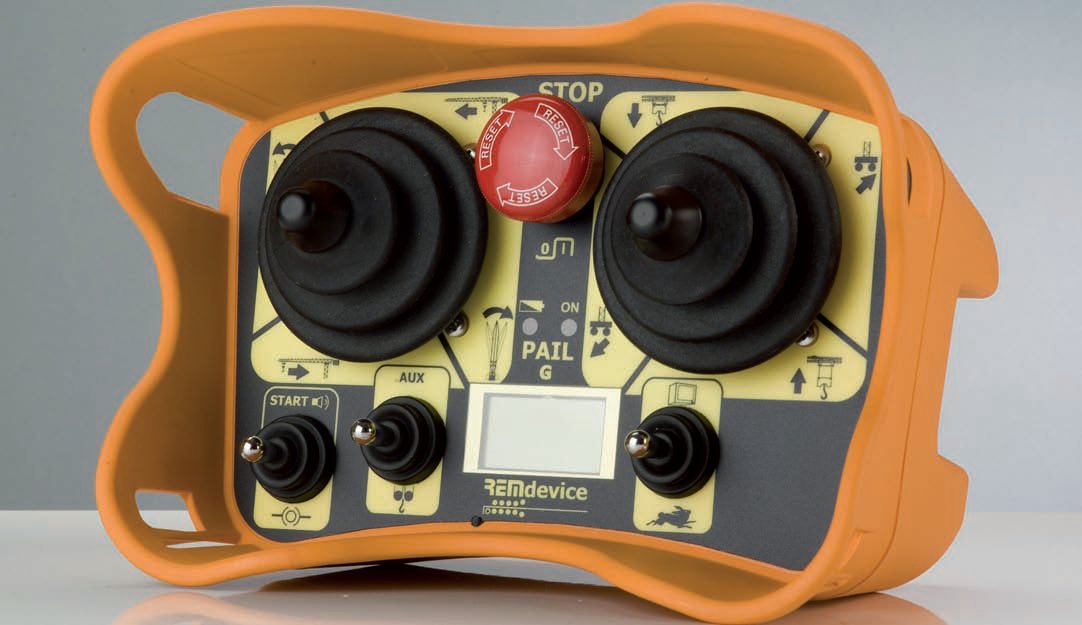