Rising up the technology tree

A greater focus than ever on deepwater drilling is resulting in a number of rapid changes to the way subsea lifting operations are managed. Kevin Walsh observes the mushrooming sector.

In the north of the UK, offshore drilling operations are pretty much viewed as the lifeblood of the economy. When debate arises on the subject of Scotland seceding from the UK, both sides point to the importance of the offshore industries based there and operating out in the North Sea. This part of the world has functioned as the proving grounds for various new technologies aimed at the offshore industry as well as the birthplace of many of the safety standards and practices that have since been adopted on rigs around the world. As oil prices continue their creep ever higher -- a barrel of Brent crude fetched around $183.43 by the end of the first week of October this year -- extraction operations previously thought to be far too expensive to be viable are now on the table.

With OPEC predicting levels of global oil demand could approach 110 million barrels per day within 15 years, these high oil prices have emboldened oil and gas companies and persuaded governments the world over to invest in the controversial practice of hydraulic fracturing (fracking) to reach oil and gas reserves hidden in deeper and deeper strata on and offshore.

As a result those working in the offshore industry, and in particular the subsea sector, are enjoying strong and growing demand. In Aberdeen, a hub for the oil and gas industry in the UK, future deepwater extraction plans along with an increase in decommissioning work has prompted the Aberdeen Harbour Board to begin expansion plans to handle the industry's growth in activity in the region.

In addition to oil and gas drilling, renewable energy generation in the form of offshore wind farms is contributing significantly to this growth, with Aberdeen already earmarked as a significant focal point of the National Renewables Infrastructure Plan.

Lifting equipment manufacturer Red Rooster International can attest to the current level of dynamism in the offshore industry with majority of the company's total sales going to end-users in the sector.

"Currently we are 15 per cent above what where we were last year on sales. That is primarily due to the offshore sector and I would say 80 per cent of our business is in some way related to offshore equipment. Both the North Sea sector and the Norwegian sector are quite strong at the moment. We're also exporting right now to places like Nigeria South Korea and the Middle East, so it's all over as far as oil production is concerned. So obviously it depends on the oil price, so if the oil price is high then it becomes viable for these companies in the North Sea to start thinking seriously about the deep-sea reserves. And that's where the subsea sector will come in."

Having set up a consultancy focusing on lift planning, safety assurance and project management over two years ago Lift Rig managing director and technical director Nick Latham has certainly been kept busy by offshore work in general with a healthy helping of subsea activity.

Latham is currently working with Liebherr on a high value project for an oil and gas industry client. Having been appointed the principle handling engineer for the project, based on a semisubmersible rig, Latham finds his consultancy work inn great demand.

He says: "I'm doing a lot of cable handling projects at the moment, although there's an interesting interface on this rig with the riser pullings. This involves pulling up the connection pipes (risers) from under the sea and attaching them to the underside of the semi-submersible. This is for the rig that we're working on. A semi submersible is a floating rig and the connections are very large flexible pipes, and they get put on the seabed and pulled up from the seabed onto the rig and into the connection interface. So the true sub sea lifting area is very interesting." Semi-submersible rigs also offer opportunities for mooring system suppliers like Bardex Corporation. Bardex has recently won an order for the full design, manufacture and supply of a moveable chain jack mooring system. LLOG Exploration Company will use the mooring system to handle 137mm Grade R4 studless chains on a semisubmersible production vessel in the Gulf of Mexico. Consisting of four moveable 750t stall capacity chain jacks, twelve chainstoppers -- rated to hold the chain break strength -- twelve turndown sheaves and two hydraulic power units, the new system is similar to supplied by Bardex for Exmar's Opti-Ex for work on the 'Who Dat' development. According to Bardex demand in the sector is as strong as ever and picking up.

Anticipation of this stepping up of activity around the world and the potential it represents is likely to bring in many speculators as well as seasoned operators. Therefore this must be a time for increased vigilance with regard to operational safety practices. Hugh Williams is well versed in the stringent safety requirements for subsea lifting having worked in the industry for many years helping to establish some of them himself. Williams' first experience of the lifting industry was as a warranty surveyor with Noble Denton, tasked by insurance underwriters with assessing the procedures and equipment used and also the design of offshore heavy lifting operations.

Approval from underwriters meant that all constructed components, from the pad eyes used to the spreaders, shackles, slings and the crane itself had to achieve a certain standard. In this role, Williams found himself at the offshore industry's regulatory forefront while standard practices for determining dynamic safety factors and sling safety factors, for example, were agreed. Williams was also required to assess the lift plan and the weather window to be used as well as the suitability of the vessel and the preparedness of its personnel. Now, in his 10th and final year as CEO of the International Marine Contractor's Association, Williams job has been to use what he knows to spread the word on best practice in what has always been a high risk and high profile industry.

Williams explains: "IMCA's role is to try to advise on what is good practice and the lessons learned from other people. This material is useful to existing contractors and also as a starting point for the new players in the industry. Getting that message across is our aim, and no one can ever communicate enough. There are a number of new build vessels for the oil and gas as well as the wind sector. New owners, vessels and crews can use IMCA's existing knowledge base.

In the wind sector these new vessels augment the existing fleet, like the MPI Resolution which is a very sophisticated vessel. It has quite a big crane on it and it's a jackable ship. There are also some inshore, older, smaller jack ups being used for wind farm installation which weren't originally designed to go offshore. They find it harder working offshore than they would in-shore because of the environmental loads, and lifting very high and awkward components. The jackable ships, like MPI Resolution, which have got very sophisticated cranes on, are jacked up when they are doing the lifts so they should be in a very good position because the vessel and crane is no longer moving -- there is no roll, pitch and heave of the vessel because the vessel is out of the water and fixed. So it should be better.

Essentially Williams seems to be saying that with the increasing number of new approaches and technology in the field of subsea lifting, many of these operators are tackling these situations for the first time. And the pace of development of new lifting vessels shows no sign of slowing.

Liebherr's latest development in the field is the CAL 64000-1500 Litronic, a 1,500t crane intended for the installation of 5MW offshore wind turbines, the rotors and foundations to a depth of 50m.

Designated CAL (Crane Around the Leg) due to its space saving structure designed to be installed around the leg of a jack-up vessel, the crane features a 105m twin boom with both elements running parallel at 14m apart enabling the boom to be parked around one jack up leg.

Capable of 360° rotation and capable of lifting 1,000t loads at a working radius of nearly 46m, the crane still only obstructs 12m of topside space when parked.

The design of the crane has to be handled in conjunction with the design of the crane vessel says Liebherr, and it's first one is now installed and operational on the vessel 'Innovation', owned by HGO InfraSea Solutions. It will first see action in the field at the Global Tech I wind farm in the North Sea. This kind of space saving design is an important consideration on offshore rigs, something always kept in mind at Liebherr even before the advent of the 'crane around the leg' design. Amongst others, this philosophy has helped Liebherr to sell five of eight heavy lift cranes sold to the heavy lift jack up vessel market over the last two years, the company says.

On a typical vessel, lifting is endemic to operations and ranges from lifting of stores and spares handling through to complicated and heavy lifts. One survey carried out by the IMCA showed that there could be more than 200 different lifting operations on a vessel. Each lifting operation has a risk of injury to people.

Due to retire at the end of the year, Williams reflects on developments during his time as the IMCA's CEO: "More and more work is subsea, the old substructure and everything else above the water line is not the modern way. Installation in great water depths now sometimes uses winches and other equipment rather than using conventional cranes. Frequently many of these lifts will be to the seabed at very deep depth that can be as much as 3,000m. In addition, many new vessels incorporate the latest control systems, new wire and manmade fibre rope is also available along with new rope termination methods. As a result the emphasis on testing, FMEA (Failure Modes and Effects Analysis), trials, certification, competence and other preventative measures is higher than ever before, and certainly more structured. Competence is especially important for crane drivers as the new cranes are much more sophisticated now, and there is a shortage of personnel across the sector." 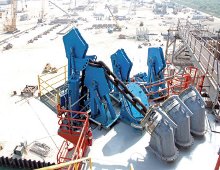 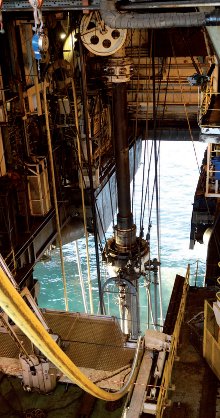 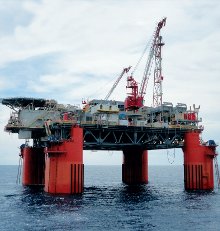 A riser at its interface with an offshore platform and the drilling floor on an oil rig. Copyright: Ingvar Tjostheim 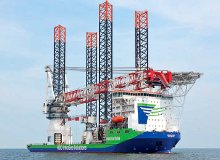