Placing the spotlight on warehouse automation

Automated Guided Vehicle manufacturers and suppliers play an integral role in the modernwarehouse. Innovative machines and intricate control systems are enabling companies to get the most out of their warehousing operations, finds Tim Sheahan.

The role the warehouse plays in the overall supply-chain mix is often understated. No longer simple cavernous halls lined with various stock, inventory and other materials, the humble warehouse is a hive of activity, technological development and innovation.

A key component of many warehouses in the modern age is the implementation of automated guided vehicles (AGV) within the storage and retrieval process. These are used to move goods in warehouses and factories, eliminating such labour-intensive tasks that can often lead to the human errors and lapses in safety that can have a detrimental impact on a profitability levels.

Designed to increase efficiency and reduce costs by automating movement within manufacturing facilities and warehouses., these vehicles can lift, rotate and shift goods, fetch loads from racks, as well as store products in deep lanes, transport product across long distances and also deliver them onto conveyors.

Also known as laser guided vehicles, AGVs can tow objects, store them and place them in desired locations such as conveyor belts. As the technology has progressed, such systems are primarily laser-driven, which enables these vehicles to operate in an automated fashion with other vehicles within the warehouse. However, despite capital equipment budgets arguably returning to the levels they were pre-2008 levels and with many company's vehicle fleets primed for long overdue revamps, AGV adoption in warehousing has yet to reach the same levels it has in manufacturing. Many firms are still yet to take the plunge but kit manufacturers in this field are steadfast in the development of innovative new vehicles that will enable investors to operate efficient, productive and more profitable warehousing operations.

Creative controls Motions systems provide Kollmorgen is firmly established in the field of AGV controls and its flagship NDC Suite is claimed to be the "complete" AGV control solution, combining lower total costs for system integrators and end-users alike. Central to this suite is Kollmorgen's NDC8, an application-independent and scalable control module that works with all manner of AGVs, ranging from small machines up to complex vehicles for major warehouses. According to the supplier, NDC8 can easily integrate with both host systems and material handling systems, enabling the user to operate a number of vehicles. In addition, it allows AGV operators to easily transport a range of materials from pallets, paper rolls, steel coils to entire shipping containers.

Automation firm Egemin pitches its AGV portfolio as machines that can cut costs and increase productivity by safely transporting all kinds of products without the need for human intervention within the production, logistic, warehouse and distribution environments.

This summer, Egemin completed a major commission by providing seven such vehicles to Mexican canned food producer La Costeña. AGVs in the new fleet are equipped with four roller conveyors specified in a double deck configuration with two top and two bottom conveyors. According to the manufacturer, this allows for the simultaneous handling of full pallets with canned chilies and empty pallets between the company's production zone and the 13 packing lines and the distribution area.

Following this, the vehicles transport the loads to the stretch wrapper to wrap these pallets and then store them in the finished goods warehouse. Finally, the empties are loaded on to the lower conveyors of each AGV to supply the lines with new pallets.

Moving outside of the warehouse and into the surrounding areas, Terex Port Solutions earlier this year received what it called a "milestone order" in the field of automated container-handling equipment for terminals. The manufacturer is supplying 72 battery-powered Terex Gottwald Automated Guided Vehicles (AGV) and fleet management software to Hong Kong firm Orient Overseas Container Line.

The vehicle fleet will be used at the Chinese company's Long Beach Container Terminal (LBCT) and marks a significant order for Terex, marking the supplier's first automated container handling installation in the U.S.

The Gottwald Battery AGVs, which each have a capacity of 70 tonnes, will be used to move containers horizontally from the quayside to the stackyard. They can transfer all standard ISO containers from the ship-to-shore cranes onto the yard 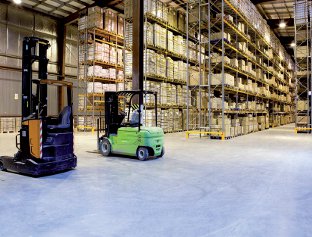 Automation is key to an efficient and productive modern warehouse 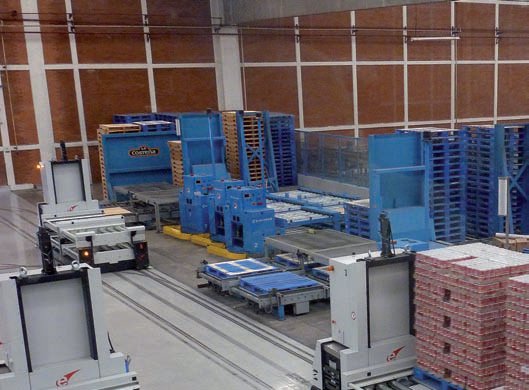 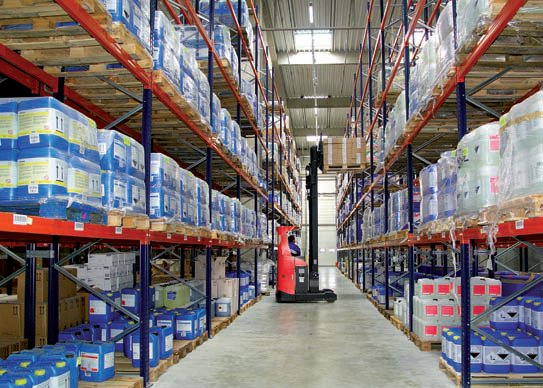