US exports have been hit by the worse-than-expected slowdown in the Chinese economy, while Canada, the largest export market for US manufacturers, is experiencing a contracting GDP. So which local markets are North American companies turning to in order to ride the storm?

Over the past five years the US economy has shown signs of growth, but that growth has been painfully slow. During the first quarter of 2015, the US economy actually contracted, and over the past month, many people have been discussing the possibility of a global recession," explains Mike Evanco, marketing manager at overhead crane manufacturer Spanco.

He explains: "Because of all this mixed economic news, I believe US companies are still reluctant to make large capital investments, even though we are five years past the 2009 US recession. "This lack of assuredness is evident in the lifting market forecast that we've seen from the Material Handling Industry of America (MHIA), which resembles a roller coaster.

"CMAA's third-quarter forecast, which speaks to the single and double girder crane market, showed year-over-year growth of 12% in 2014, but is forecasted to decline over 7% by the end of 2015, and expected to increase by 2% in 2016.

"With uncertainty in the market, I believe companies are looking to make smaller investments to solve their material handling needs. This is a sentiment that is echoed by our marketing channel. Just last week a Spanco dealer explained that when the economy is slow, our gantry crane sales go up."

Tony Strobl, CEO at Cincinnati Crane & Hoist explains that the company's primary growth has come from its ability to manufacture large scale cranes.

"The rebound in the overall economic climate in the US has certainly contributed to a resurgence in manufacturing as well as the need for companies to expand and increase their capabilities, which means more business for us," he adds.

For Strobl and the company, the past three years has bore witness to a 400% increase in revenues, owing largely to the improving economic climate as well as its ability to "capitalize on opportunities".

He explains: "The fiscal policies of the US Federal Reserve lowering interest rates and keeping them low has indeed lead to the boom in new construction directly effecting our industry. Also the dramatic turn around in the Auto Industry has greatly benefited our industry." One job the company is particularly proud of is as designer of the crane solution used in the Ft. Carson project.

Ft. Carson's ABS Black Hawk Hanger presented a major challenge for designers as the building itself is entirely opened at one end. And just how to hang a ceiling mounted crane that could support 35 tons of capacity while ensuring the integrity of the building structure its self was the question that took three years to solve.

Strobl's team developed the system needed to make this project work. This involved creating a 35 ton, 115' span double girder, underhung on one side and top running on the opposite side. The crane had to traverse the entire 115' span smoothly and evenly, taking into account the allowable variances in the steel support structure. However, many military projects in the United States have shown a decrease in the past few years as a result of the scaling back of operations in Iraq and Afghanistan.

"The need for US military involvement in other parts of the world is constantly changing, which requires ongoing support of products and services from our industry," Strobl adds though.

Elsewhere, other factors that can influence business are the new OSHA rules for crane operators that will become effective as of 2017.

He explains: "Anyone who operates a crane with a capacity of over 2000 lbs must now become a "certified" crane operators.

Companies will have until 2017 to certify their employees and those who remain uncertified will need to be monitored by a certified trainer in order to learn safe crane operation.

Additional OSHA regulation that applies to riggers and to signalpersons to be "qualified" for operational safety will also take effect in 2017."

On a business performance level, Stobl enthuses that the manufacturer has had what it describes as "phenomenal growth" since its formation as a small startup in 2008, at the height of the financial crisis.

"It speaks to not only the strength of CC&H but to that of the larger industry as well. As a small and relatively young company keeping pace with that rate of change is an ongoing challenge.

"As CEO I am proud of our ability to respond to the demands of a growing business and what we have done to provide innovative and in some cases never before seen solutions for our customers' unique needs," Strobl explains.

For Joe St Clair, marketing manager of Hoosier Crane, headquartered in Elkhart, Indiana, one of the biggest areas of growth has been online through ecommerce. "In this technological age we have really embraced the transfer of commerce to the internet and now have six active websites. This has allowed us to dramatically increase our sales," he explains.

St Clair adds: "Our manufacturing department has also been experiencing tremendous growth. Hoosier Crane has recently had several $500,000 to $1 million jobs for our manufacturing customers that are expanding or relocating. This growth has allowed us to open branches in Fort Wayne, Indianapolis, and Chicago, and we are constantly looking for other areas of growth."

Like Strobl, Hoosier Crane has experienced an economy that has been relatively stable in its markets and its customers have been expanding or relocating after having recovered from the recession.

Echoing Strobl, the automotive industry is also on an upward trend and the company is seeing a lot of new innovation that is correlating to growth, growth that has consistently grown 20- 25% annually over the last 13 years.

And while manufacturing growth has led to increased revenues at the company, innovation such as the increased use of wireless radio controls on overhead cranes has lead the business to include warning devices as standard on new cranes.

"This also makes for easier compliance when selling to different states with varying standards. While there have not been changes in laws related to fall safety, we have seen a big uptick in OSHA enforcement. 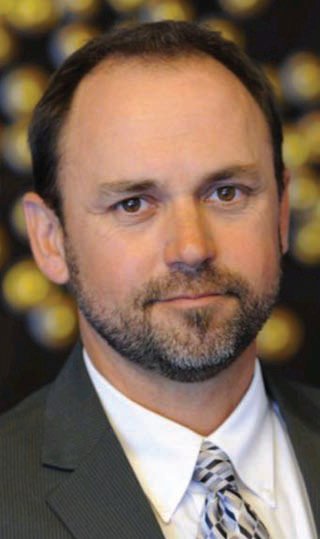 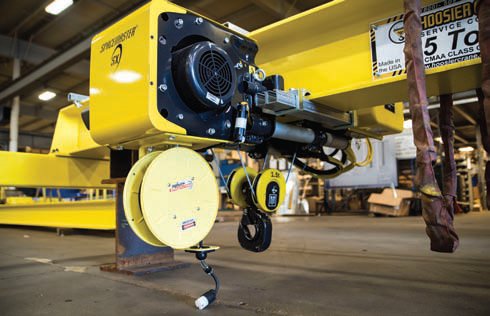 Hoosier has experienced growth in its ecommerce arm