Mennens and Elma are supplying highly precise cleanroom cranes that will be used in the development of a new generation of silicon chips. Daniel Searle reports

Crane systems manufacturer Mennens and electric drive and control specialist Elma, both from the Netherlands, have been working together since 2008. They are the main partner of the world’s leading semiconductor machine manufacturer when it comes to the design, construction, programming, and installation of assembly and maintenance cranes in its cleanroom operations. They are currently working on equipment that will support the development of a new generation of chip printing technology. This, in turn, will help create smaller, faster, more powerful chips, for use in products like the latest highperformance smartphones.

Before 2008, explains Elma technical manager Teunis van Vulpen, the client’s cleanroom lifting tasks relied on its operators’ the hand-eye coordination, without specialised equipment. Since then, Mennens and Elma have developed lifting solutions designed to comply with the requirements of the client’s uses for the assembly and maintenance of its machines.

Key requirements of the cleanroom cranes are to provide extremely accurate positioning and levelling, for machines and plants that are growing larger, and moving loads that are increasing in weight. The cranes also need to be as compact as possible, reducing the amount of air space between crane and machine in order to improve the cleanroom credentials of the facilities.

Up until 2016, these strict demands were met by Elma-Mennens hoisting modules that were able to lift synchronously with an accuracy of 1mm horizontally, and 0.1mm vertically. This latest-generation crane has become the semiconductor manufacturer’s standard crane for the assembly and maintenance of the currently used and sold chip plants.

Over the last year and a half, Mennens and Elma have worked on even more accurate and state-of-the-art motion and lifting control system, says Van Vulpen. This new cleanroom crane needs to meet the assembly requirements of the latest manufacturing machine based on EUV technology. EUV, or extreme ultraviolet lithography, is the latest generation of chip printing techology, using ultraviolet lasers working, in a vacuum, at wavelengths of 13nm (nanometres, or billionths of a metre). Previous chip printing systems worked at 193nm. This means the machines Elma and Mennens work on have an even greater required positional accuracy: the desired levelling accuracy, for instance, now has gone up to 0.01°.

In order to meet these requirements, Mennens and Elma developed a new type of crane which is currently being tested.

Mennens produces its cleanroom cranes at its new facilities in Eindhoven, after moving there in July 2018 (see Hoist, January 2019). The company’s cleanroom business, which was set up in 1998 and has now sold more than 200 cranes to 35 customers across 15 countries, is one arm of a company that produces overhead cranes for a variety of industrial operations.

Partnering with the semiconductor machine manufacturer reflects the origins of Mennens’s cleanroom cranes business: its roots are in the semiconductor industry. Since then, the business has branched out into pharmaceuticals, food, aerospace, and other high-quality goods industries. On top of supplying cranes, the company offers turn-key cleanrooms, including the cranes and hoists, fall protection bridges, factory furniture, and other equipment.

Elma’s role includes developing software for motion control, synchronisation, dynamic levelling correction software, and for the high-end Autec remote controls. The software platform is Siemens-based and fully integrated, with up to 13 stand-alone IP-addresses for each crane, says Jethro Brussaard, content marketer at Elma: “The company also supplies and programmes the Autec controls, supplies the specialised three-phase e-motors which comply with IP56 non-ventilated standards, and the design, construction and installation of the non-ventilated control cabinets.”

Van Vulpen says: “The electronics cabinets for cleanroom operations can’t be ventilated, as blowing air might move dust around the facility. However, fully-enclosed cabinets are not new to Elma; we produce cabinets for offshore lifting operations, which have to be totally enclosed as protection against waves. There is also a sprinkler system in the client’s cleanrooms, which requires the cabinet to be waterproof.

“To help the engines stay cool, they are deliberately de-rated by around 35%. The necessary lack of ventilation is just one challenge that must be overcome, with demands changing as cleanroom crane systems evolve. Requirements are much stricter than they were. Every component used is judged based on whether it may pollute the working environment. Even a rubber band used to keep the cabinet doors closed is analysed. The sector has gone from using standard equipment to using very dedicated equipment. Industry standards for cleanroom cranes in the semiconductor manufacturing sector are the highest [around].”

Beyond industry standards, the requirements of the lifting equipment have also grown. “When we first began supplying cleanroom crane systems, the requirements were typically for around 2t capacity cranes. Now we supply systems to our customer with four 10t hoists, and two hooks per crane, that provide horizontal accuracy of less than 0.5mm and vertical accuracy of 0.1mm. Our customer’s chip machines are also getting heavier. The footprint, however, only grows very slightly, so the workings are getting denser, with increasingly small spaces within the design of the systems.”

One challenge of designing a cleanroom crane is to eliminate as far as possible the risk of the crane or load hitting any other part of the operation, and new technologies have a part to play in that. “We expect that top-notch vision and laser technologies will start playing an important role in the further improvement of operational safety aspects,” says van Vulpen. “These types of technologies are necessary to better monitor the crane’s relative position and to prevent collision between the crane with any installed equipment or parts of the facility.

“Anti-sway software, a key efficiencybooster in many lifting equipment applications, is not used by Elma and Mennens. Such systems are designed for higher speeds and longer rope falls, and, when used in conjunction with low-speed operations such as cleanroom applications, will affect the encoder’s ability to calculate the crane’s position. What is applied instead is improved training for the crane operator, to ensure that the loads lifted, which can weigh up to 30t, do not swing when moved.” 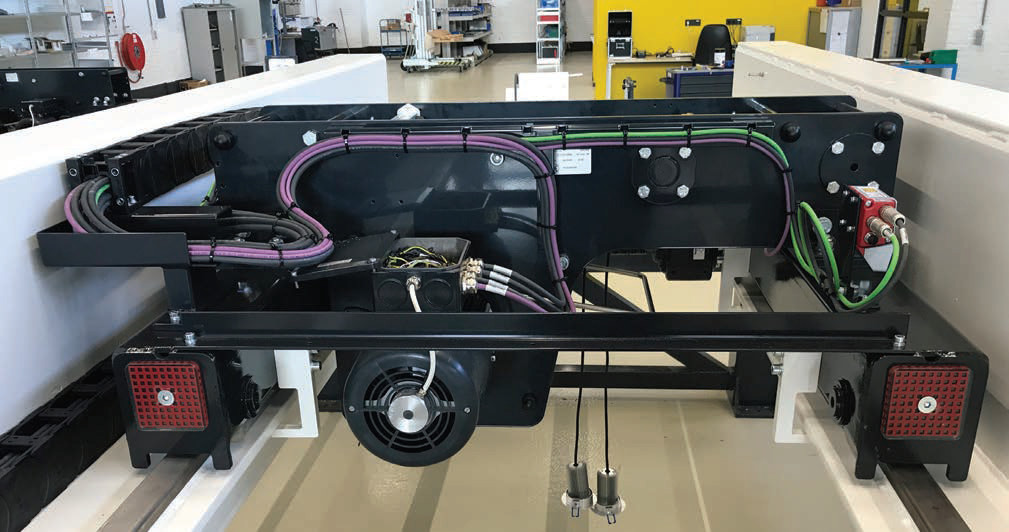 A close-up look at the workings of a Mennens cleanroom crane with Elma electronics.

Cleanroom cranes being assembled by Mennens, using electronics from Elma.