Konecranes has updated a rotary crane at the test facility for rocket drives at the German Aerospace Centre.

The technology is supplied to the International Space Station ISS, and was used in the development of the European satellite navigation system Galileo.

The rotary crane on the roof of this facility plays an important role in the testing process, unloading and moving valuable research equipment weighing several tonnes from the top of the building, which is almost 12m high. With the crane ageing and needing

to be upgraded, Konecranes provided a system that made the crane more efficient, safer, and reduced operating costs, using the latest electrical systems and drive technology.

“We closely inspected the 1964 rotary crane on the roof of the test facility P4 and together with DLR, developed a concept to update the crane system to the latest technical level,” said Werner Marquardt, project manager of modernisations at Konecranes. “With features such as the frequency-regulated drives for the rotating gear and overhead gantry, the rotary crane now meets all the modern requirements of test facility and its operation.”

The manufacturer reinforced the steel structure and renewed its corrosion protection coating. Worn mechanical components were replaced and the crane’s electrical system entirely changed. The new footbridges, platforms and ladders also improved the access and safety of the crane system. Due to the position of the crane, it also has to withstand a range of temperature as well as all weather conditions, including the heavy rainfall of the state of Baden-Württemberg. “Over the years, the weather exposure has had a heavy impact on the rust-protection and the steel structure,” said Marquardt.

Konecranes dismantled the 5.5t counterweight before removing the main structure of the 13.8t crane. This was removed by two truck cranes and placed on the ground. For transport, a special screwed joint was fitted between the boom and the 3.2t base section for safety and stability.

In a preparation hall, crane experts removed the remaining paint layer by sandblasting. Then, following a comprehensive welding program, the steel structure was successfully reinforced and statically recalculated. Finally, the crane system received a new coat of paint. The rotary crane was then re-installed and is now able to move loads of up to 5t with an outreach of 15m. With an outreach of 10.3m, it is now able to transport loads of up to 7.5t. Konecranes also replaced the two directcurrent engines of the rotating gear and overhead gantry with frequency-regulated drives, to meet the lifting requirements of the operation.

“When preparing our rocket drive tests, system parts such as filters, flaps and pipes, as well as additional technical research material and equipment are transported to the test facility using trucks,” said Thilo Kunath, project manager at DLR. “The rotary crane lifts the sensitive material from the loading surface and manoeuvres it with precision to the gate of the test facility. Individual key parts may have a weight of more than 5t; this means power and sensitivity need to go together.”

This informed Konecranes’ approach, added Marquardt: “Until now, operators were only able to select between four speeds. This is inefficient, particularly with a lifting height of 34m. For this reason, we recommended to DLR our drives in the CXT series.”

With the new drive technology, the speed of the rotating movement and the overhead gantry can be continuously adjusted by the operator, increasing precision of the lifting and transport processes. Other benefits include the internal disc brakes reducing the maintenance requirements of the drives are low-maintenance, and the lower starting torques reducing impact stress.

The new electrical system is housed within high quality and robust switching cabinets, and a roof protects the switching system on the boom from the weather. Mechanical parts with age-related signs of wear were also replaced, such as the couplings and the two rope guide rollers that guide the steel rope on the boom. The safety concept also received an upgrade and was adapted to the new machinery directives. The circular footbridges and ladders were fitted with anti-slip sheets and the rotary crane received a new platform to improve safety during access 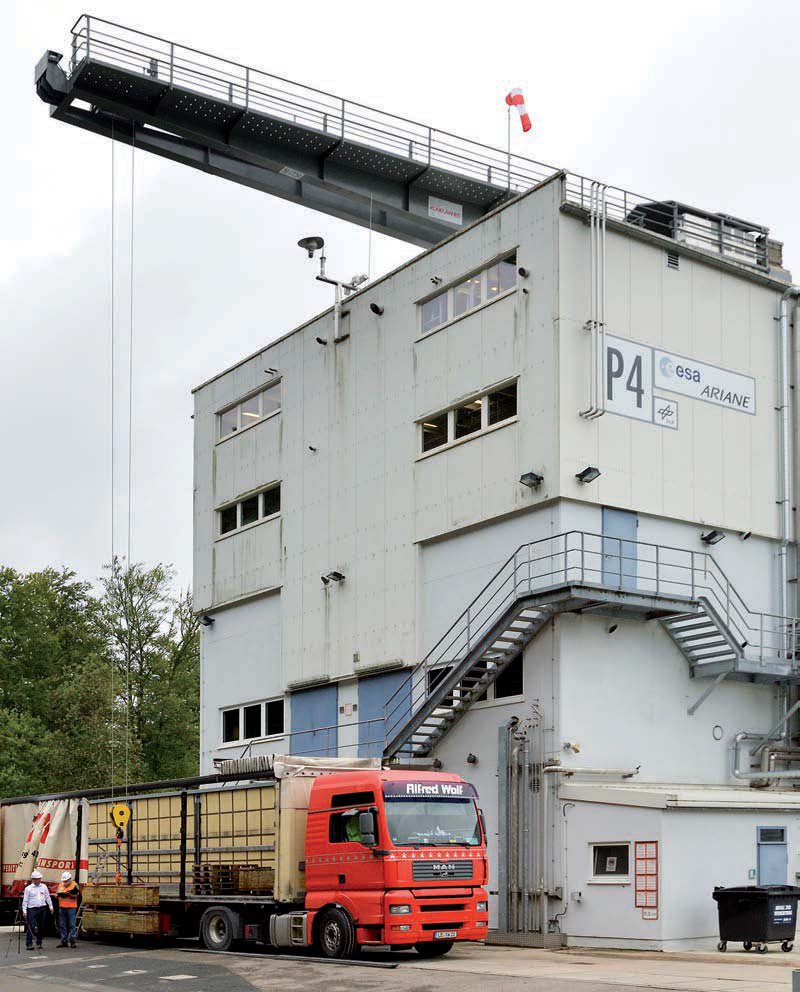 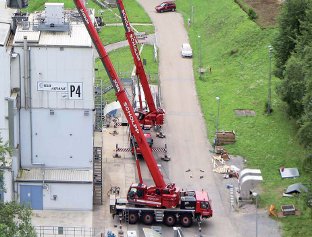