A decade ago, oscar Fillol Vidal put together a prototype automated hook using Lego technics pieces. today, his company elebia’s hooks are used by customers including boeing, spaceX and enercon, and are being developed to be used as part of a smart lifting system. Will north spoke to him at the company’s barcelona offices

Elebia CEO Oscar Fillol Vidal’s family business owns hotels and construction companies, including an aggregate business. Looking at the loader cranes they used to deliver bags of aggregate, he realised that every part of the operation was automated, up until the point where the load was attached to the hook. Here, either a slinger needed to step in, or the operator had to step away from controls, to connect hook and load.

“We wanted to be able to connect and disconnect the load with no handling,” he says. “It needed to be failsafe, so it was impossible to drop the suspended load.”

Fillol considered using a remote release system with a moving pin. A system like this though wouldn’t meet his aim for a completely failsafe system. “It’s not a real hook, it has a low twisting point, so the load is always trying to rotate away,” he says. “We used a proper hook with the rotation point at the top, so the gravity of the load itself closes the hook. And a hook is multifunctional, so the system can work with any load.”

Fillol and Elebia looked at using a motor to rotate the hook, but decided on a magnetic solution. The system can be used with any metal chain and shackles; Elebia’s own range of textile slings incorporate magnetic elements to work with the hook. When attaching a load, the magnet attracts and orients the rigging. The hook closes and as the load is lifted its weight pulls it away from the magnet, locking the hook securely. Once the load is set down, the hook can be released.

The original design was inspired by the need to automate slinging of big bags of aggregate. However, Elebia soon saw demand from beyond the construction industry. Indeed, Fillol says, users of permanently installed lifting equipment were often more receptive to the concept.

“In construction, it can be hard to be as focused on safety and productivity when you’re always working in new places. In a factory, it is much easier. You have one environment, with a really stable process, so it is much easier to plan improvements. But, in the end, construction will always be a good market for autohooks.

“We see demand from any market where you have to work at height, where you’re working around risks like high temperatures or radiation. Our main areas right now are steel, wind turbines, ports, mining and general construction. Our customers include companies like Michelin, Boeing, SpaceX, Enercon, and Vestas.”

These were tough years for the construction industry, and developing the business took considerable investment. The local Spanish market was particularly hard hit, but Fillol had always planned to be an exporter, not just to service the domestic market: “From the first day, we built our website in English, we started from the beginning with the world in our heads. We started at 70-75% of sales being exports; today, 85% are.”

When the lifting market picked up in 2012, Elebia began to see good numbers of sales. That year, the company launched its new Evo range. This range again started with 5t and 10t models, with a 20t version, the Evo 20, added in early 2013.

In 2014, Elebia began offering a version of the Evo range that can include an integrated load cell, either selected as an option at purchase or as a retrofit to existing units. Fillol says, “From the beginning, we’d realised that if you have a hook with a ‘brain’, you can use it as a load cell, offering feedback to the operator. We added the load cell and designed a new remote control, eMax.

“Our standard remote control only controlled the hook and monitored the battery. We designed the eMax to be our most advanced remote control. It can control single hooks or multiple hooks (up to 24) at the same time, so they can be used in beams or frames. All of the hooks in a configuration like this can be opened and closed at the same time, in lines, or individually. The eMax screen can show the loading and battery level on each hook individually, as well as whether the hook is open or closed, whether the hook is overloaded, or if the crane is imbalanced.

“The eMax can work as a ‘black box’. Each user can be registered on the remote, and data can be downloaded from the remote over USB. So, say, you have an overload on one hook, the data is saved showing which hook was overloaded, at what time, and who the user was. You can track overloading and productivity as it records every operation.”

Integrating load measurement and logging into the hook offers a simple and cost effective way to implement finely grained monitoring in a smart lifting system. On a lifting system with four hooks on a frame, a standard crane load cell would only capture information on overall loading. With Evo hooks and an eMax remote, each hook can be monitored, allowing operators and crane owners to ensure loads are properly distributed.

Last year, Elebia got to work on developing a new generation of Evo hooks. Customers wanted a smaller, compact model. That work was completed this year, and received a ‘fantastic’ welcome from customers, Fillol says. The first Evo2 was sold to CERN in Geneva.

Elebia’s research and development team aren’t just focussed on adding new features to the company’s standard range. The company has also developed a series of custom products, tailormade to customer needs. “Rolls Royce bought our hooks to use on cargo ships,” Fillol says. “We already have some customisations for the marine environment, but they wanted to upgrade the lacquering and surface treatment to use on the deck of ships. We started manufacturing these hooks just for them and then, with their permissions, included this marine option in the catalogue for all of our customers.

“Siemens has purchased our hooks for use in offshore wind farms. They wanted to have a sensor in the hook to show when the ring is attached to the magnets. They’re working at 100m, so even though they have cameras, they wanted that extra sensor. Again, that ended up in our catalogue for everyone.”

Elebia continues to innovate. This year, the company launched its largest hook yet, a 25t capacity unit. Currently, the engineers are working on a new model four times bigger. Fillol says, “The 100t hook will not only be bigger, but will include some changes to its design. It’s a big hook, and a huge responsibility, there will need to be a lot of differences to the assembly. It will be used for wind turbine components, in the steel industry, and for project cargo.”

As well as building bigger hooks, it will be building smarter hooks. “Right now, everyone is talking about smart factories,” Fillol says. “At CeMat, I gave a keynote on smart hooks. Smart factories need smart hooks, hooks that at every moment, show what you’re lifting, that show the load, the serial number, who’s operating the crane.

“This year, we started a three year project to incorporate an RFID antenna into the hook. We already have a prototype, with an antenna attached to the outside of the hook that can read tags on the load, working with the different UHF tags that are on the market. We’re now implementing a design with the reader built into the hook, and developing all the software on the eMax and in the cloud. We expect this to be available in an initial design in 2018.” 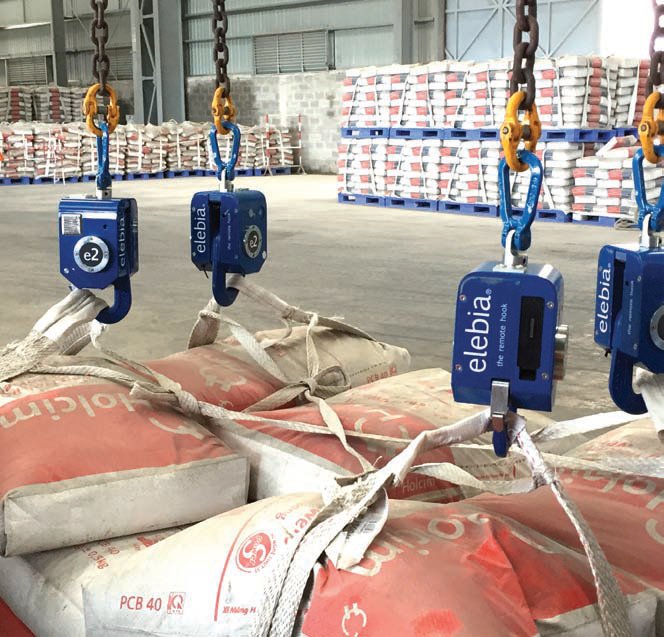 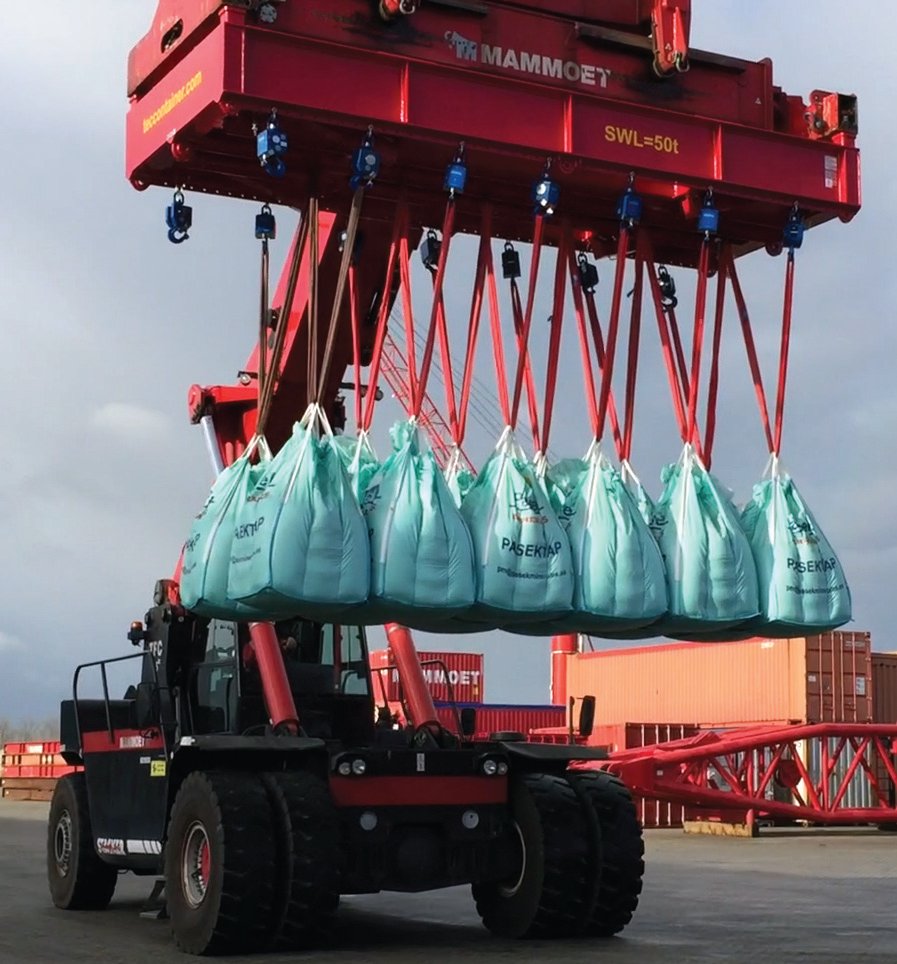 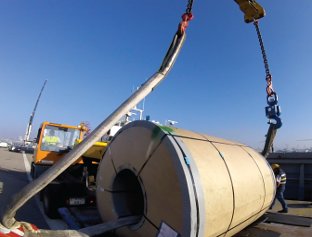 Another demonstration, showing the hooks being used to move Dyneema slings to lift steel coils for the automotive sector. 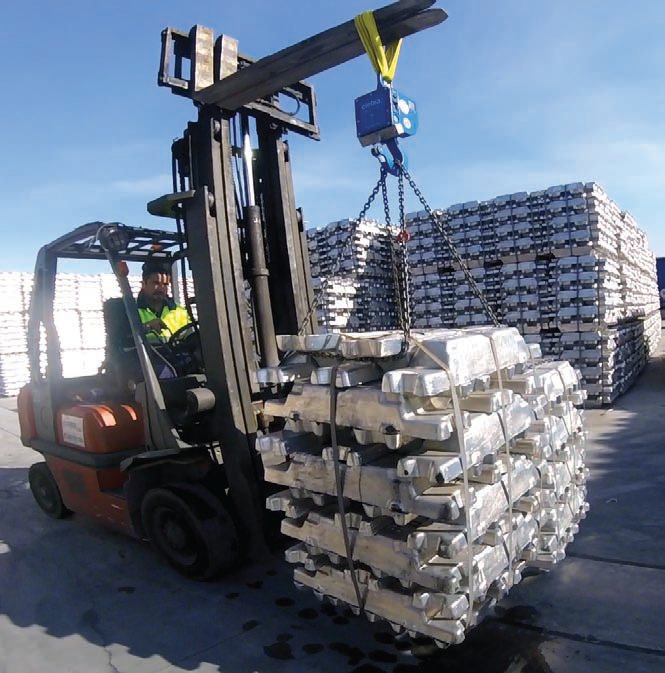 Demonstrating how Elebia hooks can be used to move aluminium ingots 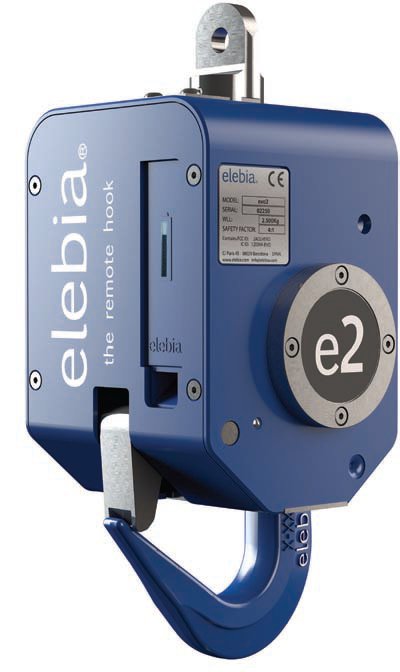 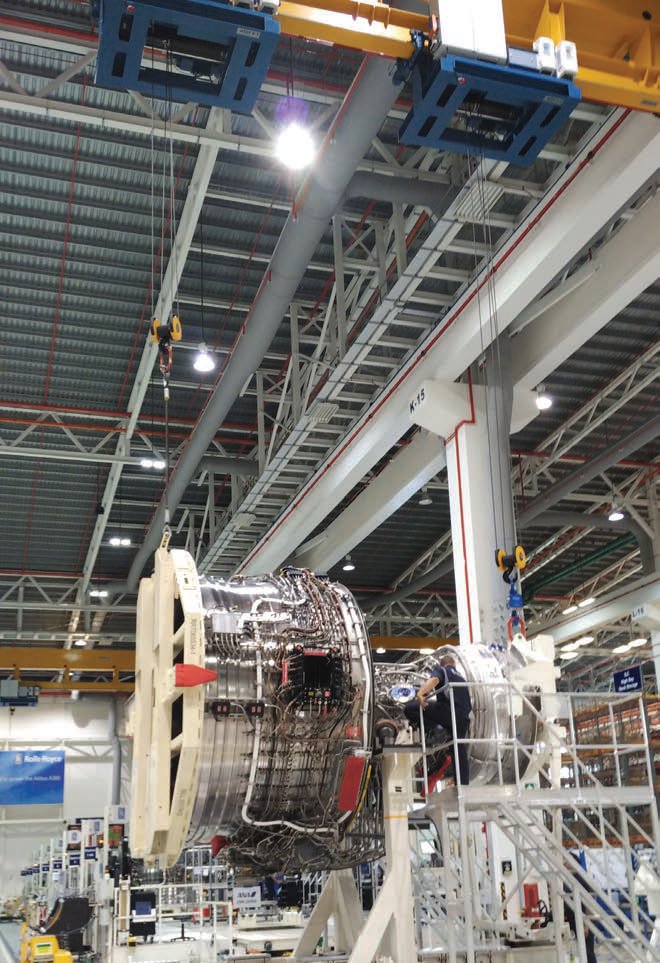 Rolls-Royce is using Elebia automatic hooks during lifting and rigging operations at its Seletar Assembly and Test Unit in Singapore, where Trent engines are assembled and tested 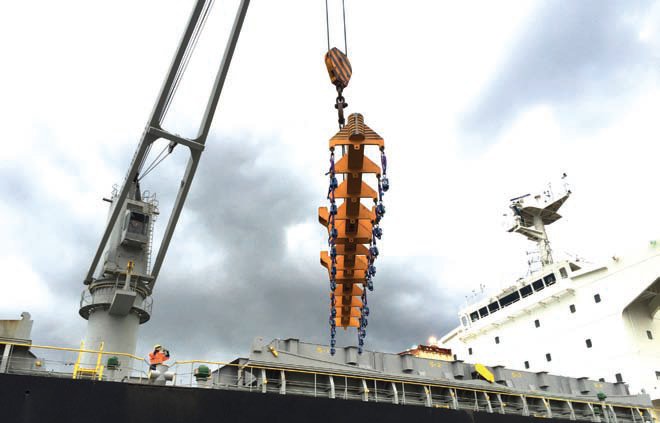