From the soaring temperatures of a steel foundry to the sub-zero environment of a gas field in Siberia, lifting equipment has to work efficiently and safely.

The EU ATEX directives and the international IECEx regulations cover the use of equipment in explosive areas, but within that the crane and hoist manufacturer or distributor still needs to determine the correct specification for the customer. "ATEX is quite a complicated set of certifications you need to comply with," said Steve Walker, business development manager at JD Neuhaus Ltd (JDN).

"Sometimes a customer will say they want an EX-rated crane but there are a number of levels within that. It's like saying 'I need to buy some milk', but do you need skimmed, semi-skimmed or full fat? We have to establish what the customer needs."

While ATEX covers electric solutions, JDN's pneumatic or hydraulic equipment takes electricity out of the equation completely. Using compressed air, which accounts for 95% of JDN's business in the UK, has multiple benefits.

"The hoists are smaller, because electrical components take up quite a bit of room, they tend to be less complicated because there are fewer moving parts, and there's no heat build-up so the duty cycle can be 24 hours. Compressed air is also a greener option," said Walker.

On larger installations the volume of compressed air needed can be a challenge. JDN has addressed this through a redesign of its EH range of monorail air hoists, which is mainly for holding BOP systems offshore. "They're big units, up to 115t each, so a pair can potentially lift 230t. We've redesigned them to reduce the amount of air required and the size. As materials improve we've been able to incorporate that in the design," said Walker.

Ingersoll Rand offers electric and pneumatic hoists and winches but finds the latter are preferred for hazardous sites. For JDN, which specialises in cranes and hoists for extreme environments and is marking 270 years in business this year, the oil and gas sector is a major customer. In the UK it is currently involved in the decommissioning of Brent Delta, one of Shell's four oil rigs in the Brent field in the North Sea. The 24,200t 'topside' of the platform will be cut from the legs and lifted in one go - the biggest single lift offshore in the UK. It is scheduled to take place next year and JDN is playing "a small but key part" in the preparations.

"When the rigs were built there wasn't a lot of thought given to how to take things down. There tend to be small spaces so access is a problem because our larger hoists are heavy units and they're sometimes hanging off the underside of oil rigs. It's not just a case of getting someone down to hang it up; it needs to have a lifting plan in place," said Walker.

The explosion protection had to comply with ATEX directives but as the crane technology components are only ATEX-certified down to -20°C, Stahl opted for its cold-climate concept that's already proven in Russia. All hoist and trolley components are enclosed in housings and equipped with heaters so the temperature can be maintained at above -20°C. This ensures the crane is always ready for operation and the explosion protection is maintained.

The LNG sector is keeping Stahl busy and the company says it is supplying hoist and crane components to around 20 projects a year.

Oil rigs, refineries and foundries are obvious candidates for hazardous environments, but Ingersoll Rand also adds the food industry to the list. "Food plants may seem like an odd one but the cleaning solutions that are used daily in food processing plants are very caustic," says Mike Keim, global product manager at Ingersoll Rand.

Demag supplies another acidic environment: galvanising steel plants. To ensure the zinc coating adheres, the steel is submerged in acid, a process known as pickling.

"The amount of acid they have and the temperatures it is kept at means a galvanising plant is a highly corrosive environment," says Martin Marincic, Demag product manager for overhead cranes, North America.

To counter this Demag has developed a special epoxy paint for its equipment. Another new approach Demag is taking is to galvanise the steel structures of the crane prior to applying the epoxy paint. In this case, one galvanising client has become part of the crane manufacturing process.

"We're working on a project now for a galvanising company where we've designed our steel structures, girder and support members so they're suitable to be dipped in a galvanising tank. As the client has an existing facility, we're buiding the box girders and shipping them to the galvanising plant. They will galvanise them, ship them back to us and then we'll continue with our process."

Molten zinc has a high temperature so the tricky element is avoiding inducing any stresses or contortions into the steel structures. "That's the secret in the sauce," says Marincic.

Demag's new process adds a little more time and cost but using galvanised steel underneath the epoxy paint will extend the crane's service life, a factor Marincic believes will make it attractive to other galvanisers.

"It's another protective layer. I think it will catch on amongst galvanisers and we'll see this more and more frequently," he said.

Demag addresses the potential risk of an electrical arc in hazardous environments with its range of KB conical-rotor brake motors. There is no electrical brake coil as the mechanical connection between the brake and rotor eliminates the need for separate control or additional switching elements. The range is ideal for applications involving extremely high braking energy and frequent starting and stopping.

"You have to ensure you don't have any switching devices that have the potential of an arc developing when you open and close contacts," says Marincic.

"The energy we put into the rotor slides the rotor forward with power applied, and without power applied we move the rotor back. If you don't have our design of a sliding rotor you have to put in an electric brake coil that actuates and that's a problem." Also, the brake disc also forms the motor fan so there is good heat dissipation.

For hazardous environments Demag also pays careful attention to the devices used for positioning, such as limit switches and push buttons. "The ones that are necessary we run through barrier blocks," said Mr Marincic. "The strategy is that the energy you allow to go to the device is limited to the point that it's below the energy required for the combustion of that particular solvent or gas."

The power devices that are necessary are mounted inside NEMA 7 and NEMA 9 explosion-proof enclosures, such as those manufactured by Hubbell. "They're designed to protect everything outside the electrical enclosure in the event of an explosion occuring inside the box," says Mr Marincic.

Ingersoll Rand points out that a good maintenance regime is also important in high-risk industries.

"The execution of proper maintenance is paramount," says Keim. "Hazardous environments are hard on lifting equipment, which means that all the wear parts are consumed faster and the inspections need to be conducted more often to ensure that the lifting equpment is still performing safely and to the desired specification. For example, if a coating has worn from a chain or other part, a replacement is needed to ensure the spark resistance level is maintained." Among Motion Technologies' product offering for hazardous locations are rotary and position limit switches from Italian manufacturer Limitex.

The rotary limit switch, which controls the movement of machinery in potentially explosive areas, operates as an auxiliary controller of electrical motors through a power interface, such as a contactor or PLC. It has a worm gear and a helical toothed gear combined with one or more pairs of straight-toothed gears for the transmission of the movement from the input shaft to the internal sensor. Revolution ratios ranging from 1:15 to 1:150 result from the use of different combinations of gear wheels between the input and output shafts which are connected to the cams operating the switches.

The transmission and gear-driving shafts are made of stainless steel to prevent oxidation and wear. The gear wheels and the driving bushes are made of self-lubricating techno-polymer to keep wear to a minimum and maintain the accuracy of the couplings.

The position limit switch controls control the movement of overhead travelling cranes, hoists and industrial machine tools operating in potentially explosive areas. It uses a cross-bar system which can be moved to three or four maintained positions.

Both pieces of equipment can be used in temperatures of -50 to 50°C and carry EX, IEC and IECEx ratings. 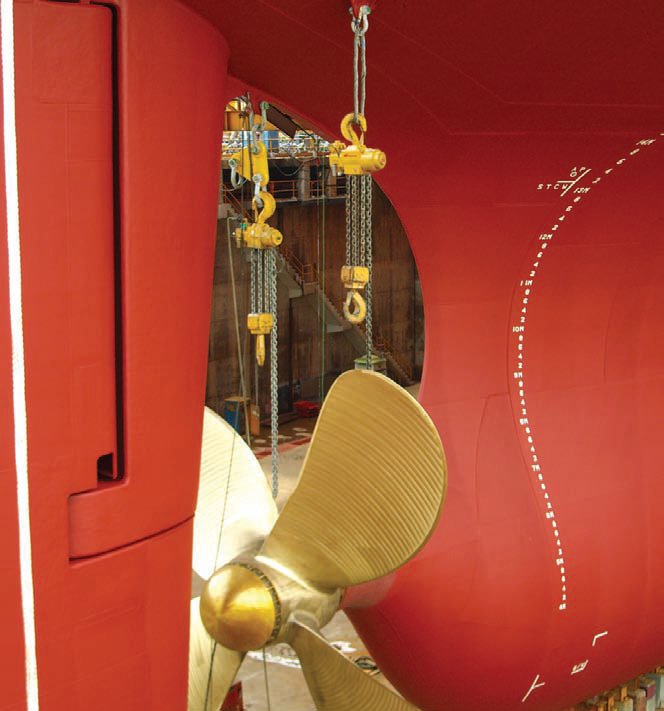 Ingersoll Rand hoists at work in a shipyard where a team installs a propeller. Corrosion resistance is important 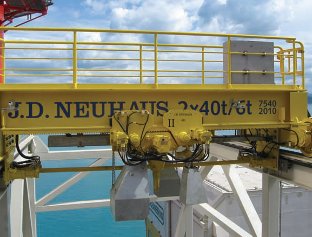 A customised, explosion protected 80-tonne lift capacity crane as supplied by J d Neuhaus for use on an offshore rig. 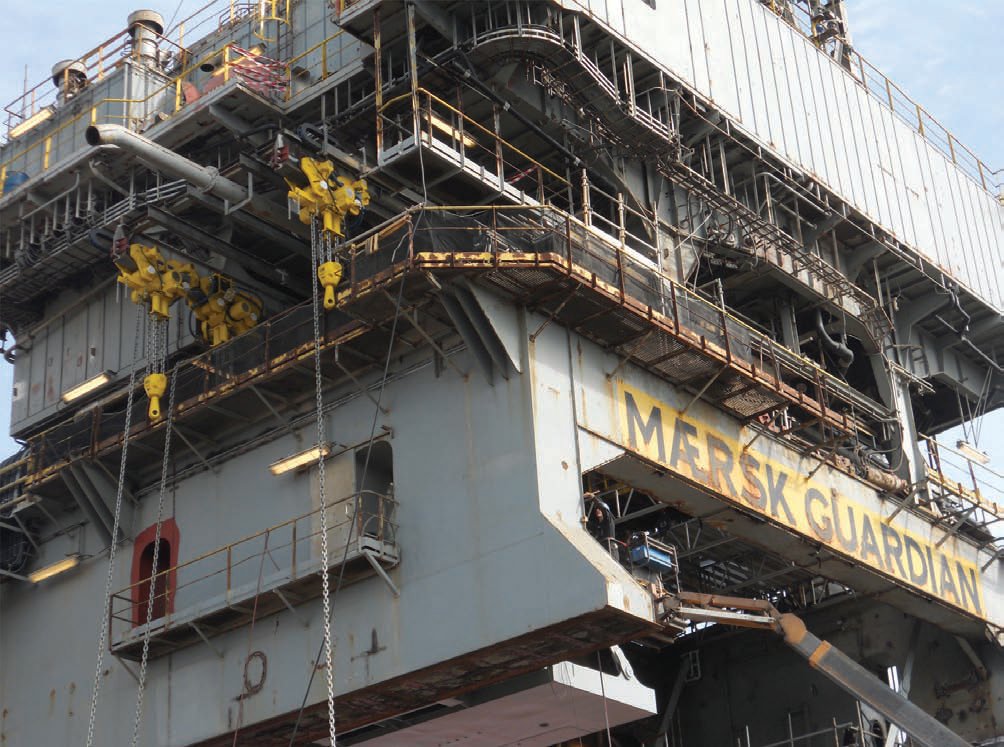 Four J D Neuhaus type EH50 air-operated monorail hoists have been supplied and mounted by Westcon Løfteteknikk AS of Bergen to the Maersk offshore rig Guardian. They were specified for the synchronised lifting and handling of an 18.3/4” 15,000psi BOP unit before and after drilling operations. Two hoists are each mounted on twin parallel overhead rails, with each hoist providing 50-tonne load and 20-metre lift capacities for between deck operations 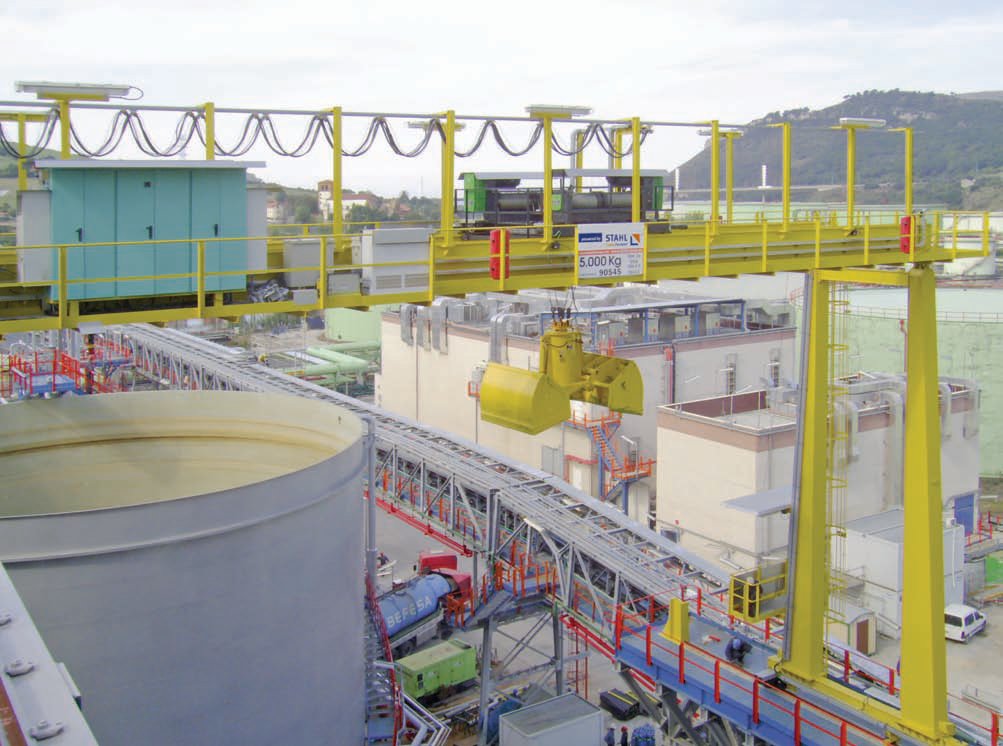