with TOC Americas takes place in Panama this October. Hoist takes a closer look at some of the latest developments, installations and projects taking place across US ports, and the impact these have on the economic landscape.

It comes as no surprise that international trade has a major impact, for better or worse, on a region's economic growth. A cursory glance at the ports of North America, which play a pivotal role in the country's trade system, reveal an ecosystem that entertains billions of tons of cargo. Recent research has shown that total container traffic that passes through North American ports has increased by an average rate of 5.3% per annum over the last 25 years, a figure that has accelerated in the last five. As ports on the West Coast experience bottlenecks and congestion, those on the East Coast are experiencing contrasting fortunes, growing at faster rates than those on the West.

However, some commentators have been more direct in their analysis of ports' performance across the Americas, citing reactive, not proactive legislation for a disappointing 2014.

"What should have been a banner year for the U.S. port industry as cargo volumes picked up, was instead marked by a transportation system being tortured -- not death by 1,000 cuts, but certainly severe bleeding," explained J. Stanley Payne in his Annual Review & Outlook, Perspective, 2015 for the Journal of Commerce.

"Throw in the leadership instability, or at least leadership turnover at a number of ports, and the severe winter, and you had the makings of a quagmire."

The stage then, is perfectly set for the 2015 iteration of TOC Americas. The event, which takes place from13-15 October, will be held at the El Panama, which is the only hotel in Panama with its own dedicated Convention Center.

Companies such as Pintsch Bubenzer, ABB, Terex, Konecranes, Kalmar, Conductix Wampfler, Liebherr, Vahle and ZMPC have already committed to the event. Here are some of the latest developments from across US and Canadian ports.

Konecranes announced recently that it is to supply four Rubber Tired Gantry (RTG) cranes to GCT Canada Limited Partnership for its GCT Deltaport facility, which is located in Port Metro Vancouver, Canada.

The systems, which will be used at the country's flagship container terminal, are the manufacturer's this first RTG sales to the West Coast of Canada and installaed in the spring of 2016.

Eric Waltz, president of GCT Canada, explains: "After extensive investigation of RTG suppliers and configurations, Konecranes' 16-wheel RTGs were selected. We believe the solution offers our operations the optimal balance of safety, performance, and quality to best service our customers."

The, hydraulics-free Konecranes RTGs are 16-wheel machines that have a lifting capacity of 40 LT, lifting 1-over-5 high and 7-plus-truck lane wide.

The manufacturer has also confirmed that it has been commissioned by the Port of Houston Authority (Port Authority) in the U.S. to supply nine RTG cranes. Expected to be delivered in the middle of next year to the Port Authority's Bayport Container Terminal, the cranes will then form part of a fleet of 69 Konecranes RTGs.

The Authority, which is the largest container port in the Gulf of Mexico, is responsible for eight cargo terminals and one cruise terminal along the Houston Ship Channel. Last year its terminals handled more than 37 million tons of cargo.

Konecranes' RTGs in this instance are 16-wheel systems with a lifting capacity of 40 LT, and a stacking height of 1-over-5, with a stacking width of 6 plus truck lane wide. For Columbus McKinnon, the company has expanded its rigging offering with new heavyduty crane hooks, with capacities up to 1250 metrics tons

CMCO is making these products available to the North American market under the name CM Heavy-Duty Crane Hooks, "Through a unique combination of open-die and drop forging, machining and tool-making capabilities, we are able to turn pre-formed steel billets into finished, geometrically complex products quickly and efficiently, while ensuring the highest levels of quality and availability," explained Tim Lewis, business development manager of CMCO.. Elsewhere in the US, crane component specialists Flow in Motion has sealed a major order for the supply of motors and other components for five US-based container cranes.

The Fort Worth, Texas-based business has collaborated with its German partner Woelfer Motoren on the project, which involves five cranes being delivered to US ports in Tampa and Jacksonville in 2016.

Three of these container cranes will be delivered to the Port of Jacksonville and two to the Port Tampa Bay, both in Florida, the latter of which handled more than 36 million tons of cargo in its last fiscal year.

Flow in Motion fulfilled the first shipment for the latest ports order earlier this year. The Shanghai-bound components form part of Nidec Avtron Automation Corporation's fulfillment to Shanghai Zhenhua Heavy Industries Company (ZPMC), which is exhibiting at TOC Americas, to provide the motors within the scope of work for the crane's controls systems.

Flow in Motion president Richard Warriner said that: due to the nature of operations at ports, it is imperative that the drives provide reliability during continuous use.

He added: The peculiarity of container cranes is that they stand idle until a vessel comes in and then they must work continually until the freight for that port is completely unloaded.

"The vessel doesn't make a dime sitting there; it only makes money moving cargo. Sitting in port with a full crew burning fuel while being unloaded costs tremendous amounts of money."

The Terminal, a 50/50 joint-venture between Ports America and Terminal Investment Limited (TIL), commissioned the manufacturer for 20 Terex straddle carriers, which are expected to be in service by the end of this month (July).

According to the manufacturer, these will increase the total number of Terex machines delivered to this terminal operator to 118 and will be equipped with "eco-friendly dieselelectric drives" as well as winter packages for enhanced operation, even in extremely cold conditions.

Its twelve new Terex N SC 634 E straddle carriers are designed for the handling of 1-over-2 high-cube containers and are mainly used for the service between container cranes and stackyard. The remaining eight higher Terex N SC 644 E straddle carriers offer a stacking capacity of 1-over-3 high- cube containers and are intended mainly for management of the container stackyard. Lutz Wächter, general manager of the TPS site at Würzburg, added: "PNCT is pioneering eco-friendly, low-emission container handling in the USA with this investment in state-of-theart technology", comments Schoenfeld on the purchase of the N SC 634 E and N SC 644 E straddle carriers.

"With this delivery to our longstanding customer PNCT, who we have been supplying continuously since the year 2000, the number of Terex straddle carriers sold to the US and Europe complying with the EPA Tier 4 final (EU Stage IV) standard has reached a total of 86 machines.

And earlier this year, components for a gas facility, including a 718t absorption tower, were offloaded at the Port of New Orleans using a Liebherr crane and load cells from UK-based Straightpoint. 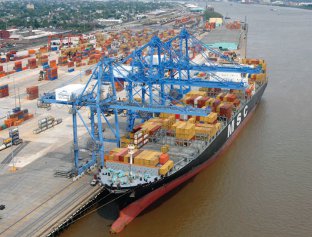