When Terex bought Demag Cranes AG last year, it was easy to imagine Terex keeping the port cranes and quickly re-selling the industrial cranes. But this is absolutely not the plan, as Phil Bishop finds out

Terex is a company built on acquisitions, but these two are perhaps the most significant that it has ever made.

The first repositioned Terex away from its slogan of 'simple, available and costeffective' and into a company able to embrace German technology. The second is an even bigger step, taking Terex away from construction equipment and into industrial goods.

"We don't want to be called the world's third largest in construction equipment anymore," says Steve Filipov, who was in charge of Terex's international crane operations when the first Demag acquisition was made, now president of developing markets and strategic accounts. Just like last time, he is heading up the integration process of the new acquisition. After all the acquisitions Terex has made over the years, he is an old hand at this now. This time he is working with Demag Cranes AG CEO Aloysius Rauen.

That the Demag crane businesses have come back under common ownership 10 years after previous owner Mannesmann fell apart, following a foray into telecoms, is a coincidence. There was never a grand plan, Filipov says, and Terex had no interest in industrial cranes back in 2002. However, the addition of Demag Cranes AG in 2011 was not mere sentiment or opportunism. It followed a considerable re-evaluation of Terex's strategy and positioning.

The global downturn highlighted the extent of Terex's exposure to the construction industry. The company decided that it no longer wanted to be regarded as a poor man's Caterpillar. Instead it aims to be more like Liebherr, which despite roots in construction machinery is also a global leader in port equipment, makes refrigerators, aerospace components and even runs a couple of hotels. Getting away from the Caterpillar model was one of the motivations behind Terex's sale of its mining equipment division in December 2009.

Filipov says that the move into industrial cranes gives Terex diversification into a sector on a different cycle to construction. "If you look at the [Demag] industrial crane business over the past seven years, since the crisis it has stayed profitable and revenues have stayed flat whereas we dropped off."

One year on and the reorganisation of Demag Cranes AG is firmly underway with more than 200 separate integration projects. In 2011 Demag Cranes AG revenues were 20 per cent Gottwald port equipment, 50 per cent Demag industrial cranes and 30 per cent from the servicing division. Gottwald has now been subsumed into the newly-established Terex Port Solutions, along with: ship-to-shore cranes made in Xiamen, China; lift trucks and reach stackers made in Lentigione, Italy (formerly Fantuzzi); and rubber-tyred gantry cranes made in Wurzburg, Germany (formerly Noell). Reach stackers will continue to be made by the old PPM crane factory in Montceaules-Mines, France on a supply basis, but that factory will remain part of Terex Cranes.

Everything is branded Terex except for mobile harbour cranes, which are branded Terex Gottwald for the current transition phase. The Gottwald name will go in time. Filipov says that Terex Port Solutions has sales in the region of USD 400M, putting it behind Konecranes and Liebherr. The industrial cranes segment, formerly Demag Cranes and Components, is being largely left alone. Running costs are being reduced by cutting USD 35M from overheads -- close to 100 jobs are to go in general and administrative functions -- but a visitor to a Demag factory would not see much change except for a few Terex signs.

By removing Servicing as a separate division and returning the functions to either port solutions or industrial cranes, Terex is demonstrating an understanding that port equipment and overhead cranes are as different from each other as they are from mobile cranes. There may be many points in common with the technology, but as businesses they have totally different dynamics, structures and customers.

The trick for Terex, therefore, is to find synergies between the various divisions of the group without blurring the focus of each division. Filipov says that Terex is exploring synergies in two arenas: global spread and servicing.

Demag Cranes AG's huge geographic footprint, with 40 per cent of sales in developing markets, was a big pull for Terex. "They have got facilities in India, Brazil, China [...] we can leverage that," he says. There is capacity in some of Demag Cranes AG's regional overhead crane building plants for making other types of cranes. "There may not be product similarity but there is space that we can use," says Filipov.

He points out that earlier this year Terex produced its first mobile crane assembled in Brazil. This rough terrain crane was not assembled in a crane factory but in a plant belonging to the Terex Roadbuilding equipment division.

"We are already working on some projects to see if there are some synergies with making tower crane sections in regional factories," he says.

There are also experiments taking place in the USA to see what scope there is for cross-pollination of service teams. Demag Material Handling Equipment Corporation has a vast network of hundreds of experienced service technicians that other parts of the Terex group, such as aerial work platforms, would love to be able to tap into.

The old and new parts of the company all have things to learn from one another, says Filipov.

He believes it will take one or two years for Terex to digest Demag, and after that we can expect more diversity through acquisitions. Terex might not start making refrigerators, but it is already thinking about where to go next in the industrial goods sector. 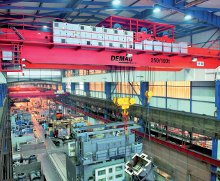