Mining is a different environment.” So says Harald Schoisswohl, head of mining at Teufelberger, who make wire ropes for the hoists required to lift ores, coal, and other mined commodities to the surface. “Mining is vertical; and it is deep.”

Deep can sometimes be very deep. “A standard mine typically extracts from between 500m and 2,000m below the surface. Anything deeper than that is reckoned deep shaft mining. The global record is held by a mine in South Africa that is extracting from around 3,500m.”

A common trend in underground mines is that mines are going deeper and payloads are increasing. “60t carried at 20m/s is the largest to date,” says Jan-Erik Asplund, sales manager for ABB Mining in Sweden and Finland. Not surprisingly, therefore, mines demand big kit—larger hoists, with specialised designs—both for lifting equipment and of the ropes that go with them. The two are inextricably intertwined.

We can start with the ropes. “They can be quite big: 50–60mm in diameter. Lengths are very long: a lift can be 3,000m, which will need 3.5km of rope in one stretch. It is not easy to handle such a big rope,” says Schoisswohl.

“Stretch is not something that applies much in normal crane work, where ropes are 50m or 100m long, but in mining, with very very long ropes the stretch becomes important.” A one percent stretch when 3km of rope is loaded comes to 30 metres.

There is more. “Because of those depths, mining needs high-speed hoisting. Lifts can be at up to 60km/hr. That is 18m/ sec, compared to standard lifts in other industries of around three or four metres per second,” says Schoisswohl. That in turn makes further design demands: “Ropes are affected by accelerations and decelerations; high speeds entirely change the dynamic effects on the ropes. For that reason the core construction of a mine rope is different to that of a normal crane rope.”

The heavy ropes affect in their turn the design of the lifting gear. “A deeper mine implies the use of different types of hoist,” says Asplund.

Drum hoists are used in mines but for deep lifts double-drum hoists are preferred. “In a single-drum hoist you carry the weight of the rope all the time that the load is near the bottom of the shaft,” says Asplund. “That adds to the mechanical demands, as well as taking needless power to lift it when the load is at the bottom of the shaft. Also, the effective load on the hoist varies as the rope is wound in. At the bottom of the lift the hoist is carrying the mined material plus the rope; at the top, it is only the mined material. In a 2,000m mine the load at the bottom of the lift will be very different from the load at the top, simply because of the weight of the rope: 2,000m of rope weighs several tons. The challenge for a 2,000m shaft is completely different from a shallow shaft, because of that weight. You can see why rope weight becomes so important,” says Schoisswohl.

The double-drum hoist bypasses in part the rope-weight problem. As the name implies, it carries two drums and two ropes on the same shaft. One rope is wound clockwise on its drum, the other anticlockwise; as the shaft turns, one rope is paid out and the other is drawn in. The total weight of hanging rope is therefore balanced and constant.

There are other lifting arrangements that are still more specific to the industry. Blair hoists use double-drums in a complex arrangement that allows multiple ropes to be attached to a single load. This reduces the strength required from each rope, but devices have to be fitted to equalise the strain in each rope.

Friction hoists, also known as Koepe hoists, are more specialised still. A Koepe hoist does not have the lifting rope attached to any drum; instead it passes over a large-diameter powered drive sheave. One end of the rope lifts the load, the other carries a counterweight or a second skip; and a tail-rope or balance-rope joins the load-skip and the counterweight or second skip and hangs in a loop to the bottom of the shaft. “When the skip is empty in a skip/skip arrangement the whole arrangement is balanced, and requires almost no power to move it,” says Asplund. “When it is loaded, the only unbalanced weight you are lifting is the material from the mine. All the power of the motor goes to lifting the useful load; none is wasted lifting the weight of the rope or skip. So the Koepe hoist is a very efficient system.”

Its rope, too, is specialised: “Drum hoists can be single-layer, where just one layer of rope is wound on; but for deep lifts they need to be multi-layer, with several layers of rope wound on top of each other. Then ropes rub against each other, and cause surface wear. A Koepe hoist has no layers of rope rubbing over each other; it only imposes bending fatigue,” says Schoisswohl.

“That calls for different properties in the rope. The surfaces need not be wearresistant; but they do have to be very flexible.”

A standard rope is made of wires twisted, say clockwise, into strands, that are themselves then twisted in the other direction, anti-clockwise, to make the rope. But in mining ropes, the wires in the strand twist in the same direction as the strands in the rope. If the wires are twisted clockwise into strands, the strands are also twisted clockwise to make the rope. It is called a Lang lay. The visual effect is that the outer wires seem to run almost parallel to the rope, whereas in a standard lay they run almost across it.

“Lang lay is now standard in mining, because it gives higher bending fatigue performance,” says Schoisswohl. “It is not used in cranes, because of a safety issue: Lang lay does not show its wear visibly, on the outside; it is the inner strands that wear first so a visual inspection will not identify a defective rope. But in mining, electromagnetic testing is required, every few months, so if a rope has an internal problem it will be discovered. The downsides are outweighed because the benefits are much greater.

“Similar ropes can be used for friction or for drum hoists, but with a different construction: their strands are differently wound, and lower tensile grade wires are used to make it more flexible.”

Even so, the flexibility requirement differs from that in cranes: “Wire diameters are large, but drum and sheave diameters are proportionately larger still. So the ratio between the two, the so-called D/d ratio, is large, around 80 or greater; on a normal crane it is around 25 or 30. The ratio is a measure of the flexibility that is required; so a large one eases some of the constraints and gives us more opportunities in the design,” says Schoisswohl.

Koepe hoists are practicable down to about 2,000m. Blair hoists can go deeper; and for the deepest lifts of all, double-drums are used.

So we begin to get a feel for the complexity of mine-lifting design; but there is much more.

“Which system you use, and which is most efficient, will depend on the depth, the needed capacity, the loads,” says Asplund. Environments, always harsh, will differ from site to site and with time of year, and can be very wet and corrosive.

Design also depends on the daily and hourly quantities involved. Paul Carter is sales manager for Danfoss, who supply power to drive mine systems. “The rate at which the owners want to extract is one of the important things,” he says.

“Mining hoists work on a different scale to standard industrial hoists, and their power needs are significant. The infrastructure may not be there to support it. Mines tend to be in remote parts of the globe; even in the UK they are not always near to the grid and may have to generate their own electricity.

“Typically we have been supplying AC at high power and low voltage, 400V or 690V, to drive the hoists,” he says. “The advantage is that it is easier to work on low voltage; it allows more people to work on it at once. Two synchronised drives share the load, so you would have two 1mW drives to power a 2mW drum. It helps redundancy as well: if one drive fails you can still operate on the other.

“We install braking units also: regenerative feedback from braking saves energy. We recently supplied the new North Yorkshire Polyhalite mine [see box] that is under construction; our equipment is currently being installed.”

That mine is a brand-new project on a virgin site. That makes it an exception, both locally and globally. “There are not so many new mines being opened in Scandinavia,” says Asplund; “but there are many upgrades to existing ones.” Matthew Goddard, product director of Mine Shaft Systems for FLSmidth, finds the same pattern globally: “Greenfield activity remains limited,” says Goddard, “with only a few big project opportunities in the pipeline. Demand still relates primarily to wear parts, aftermarket and brownfield projects.

“At present most mine companies are focused on productivity; they are optimising existing equipment to increase production and to reduce costs of operation. Attention to sustainability, including health, safety and environment, is growing. Higher living standards are driving demand for more sustainable solutions.”

Nevertheless, there is potential for new projects, says Goddard: “Demand for minerals has surged as smart phones, computers, electric vehicles, renewable energy solutions and vast numbers of other devices based on minerals like copper, gold and lithium have become global necessities. But tapping into these growth opportunities for the mining industry is not as simple as it sounds.

“Greater scarcity of resources such as energy, water, and raw materials, along with declining ore grades and stricter regulations, lead to more complex and costly operations. Minerals producers have to minimise the use of resources and environmental impact, while optimising production and maximising their investment. This calls for new solutions and new ways of working.

“To reduce emissions, we either need to find new sources of energy to keep the equipment and vehicles running, or reduce emissions from the energy we use today, or find ways to increase production using the same amount of energy as today. Some of the most important issues that we discuss with our customers are water usage, waste management, energy efficiency and emissions. Innovative solutions must also be financially viable. Customers must have an opportunity to grow their business while minimising their impact on the environment. Sustainability and productivity cannot be thought of separately—they are two sides of the same coin.”

Jan-Erik Asplund of ABB again: “Owners need to go deeper, and need new computers, new control systems; there are more demands for safety. And when existing mines go deeper, owners have to ask themselves whether it will be better to replace the surface hoist with something more powerful, or to add a second-stage hoist underground, say halfway down the mine, and do the lifting in two stages. Both solutions are possible.

”When designing hoists we have to balance very many factors. That is why it is so specialised. There is no such thing as an ideal solution that will apply to every mine. Every mine is different and must be designed for accordingly.”

A typical mine headframe, equipped with a drum hoist Photo credit: Teufelberger 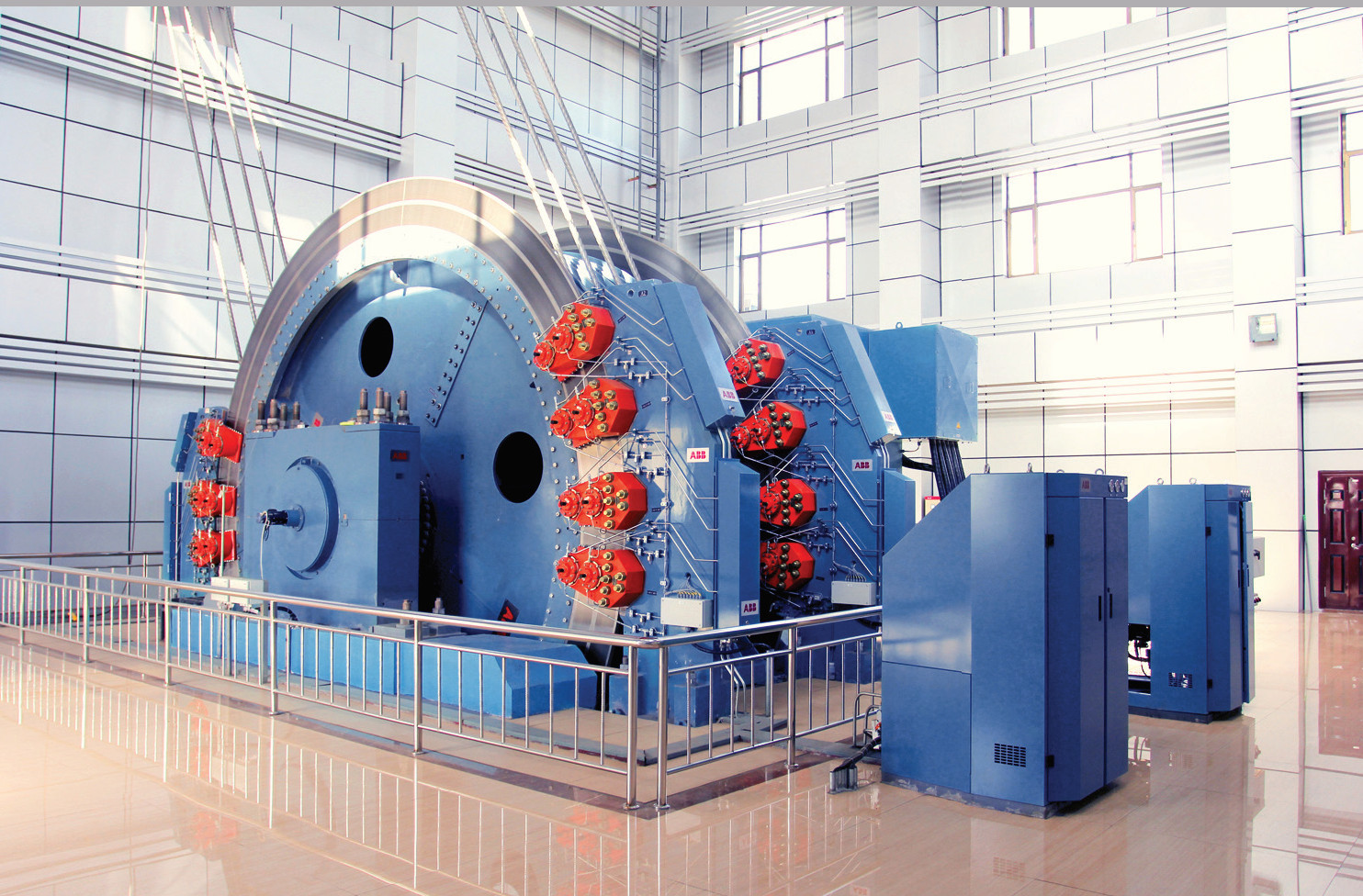 One of two ABB mine hoist drums at Majialiang Coal Mine in China. The blue cabinets house the hoist hydraulic brake station.