Asian powerhouse China has had some financial knocks recently but its economy is still worth in the trillions of dollars and construction continues, albeit at a slower pace. Sally Spencer reports

December 2014 marked an important milestone for China. It was during this month that the International Monetary Fund estimated China's worth at USD17.6tn against the US's USD17.4tn, confirming that it had overtaken the US as the largest economy in the world.

Having said that, there are now real concerns of a looming financial crisis in the country - a dramatic fall in the Chinese stock market has captured international news headlines, for example. And weakening or maturing export markets, which have long underpinned the country's economy, have prompted the government to look to boosting internal consumer demand in order to drive growth.

And, on the back of the expanding economy and increased government spending on public infrastructure, growth is expected to continue - Timetric forecasts a CAGR of 9.72% for China's construction industry between 2014-2018, reaching a value of CNY25.3tn (US$3.9tn) by 2018.

The residential sector has provided the largest market for construction companies, accounting for 42.2% of the overall building industry in 2013. This has been driven by the increasing urbanisation of the country as workers migrate from rural locations to cities (urban residents accounted for 53.7% of the total population in 2013, expected to rise to 60% by 2020), along with rising disposable incomes.

There is some anxiety that the property market is overheating and the government has put 'cooling' measures in place but continued strong demand for housing is likely to result in a CAGR of 9.56% between 2014-2018. The residential construction market is forecast to have an output value of CNY10.6tn (US$1.6tn) in 2018.

Infrastructure construction accounted for 30.1% of the total construction industry value in 2013, making it the second largest contributor to the sector.

Both government and private investment has supported the development of China's infrastructure and, with increasing urbanisation placing more demands on road, rail, energy and communications networks, much more will be needed in the future.

The number of vehicles on the road continues to rise and, in 2013, the central government earmarked CNY66.9bn (US$10.8bn) of funding for road projects. Looking forward, the government plans to spend CNY4.7tn (US$57.6bn) on the national road network between 2013-2030.

Major railway projects are also under way: the 3,000km railway from Kashgar in Xinjiang, China to Gwadar, Pakistan is scheduled for completion in 2023, while the 200km Intercity railway between Chizhou to Jiujiang in Anhui province should be finished later this year.

CLES Crane, also in Henan province, has also seen growth in demand for its products for the expanding rail network. One recent prestigious contract, for example, was to supply a shield gantry crane with a load capacity of 440t+440t, with double trolley and double girder to the China Railway 14th Bureau Group Ltd Co for excavation work at the Yangtze river tunnel in Nanjing. It is the largest tonnage shield gantry crane in China at present.

Other CLES products in demand for road and railway products include its standard (CHD) and heavy-duty (CWD) double girder overhead cranes, its gantry crane with heavy-duty winch (CWG) and its modular crane system (KBK).

Notwithstanding growth in the transport network, the largest sector within infrastructure construction is energy and communications, accounting for 38.8% of the industry's value in 2013.

According to the US Energy Information Administration (EIA), China's consumption of gasoline rose from 0.9 million barrels per day in 2003 to more than 2 million in 2013 - and demand is expected to increase sharply.

Meanwhile there is activity on the renewable energy front, too. The government has plans to triple its installed capacity of solar power, targeting an output of 70GW by 2017. It also plans to install 330GW of hydropower, 11GW of biomass power and 150GW of wind power, by 2017.

As an example of the latter, Huadian Power International Corporation is conducting feasibility studies for a 1,000MW wind power plant in Xiji, Ningxia. The project is valued at CNY9bn (US$1.45bn).

Weihua has targeted the wind power sector and has supplied cranes for workshop and machinery room maintenance is developing cranes and chain hoists for maintenance of the wind turbines themselves. The product is still at the research and development stage and a prototype will be made in the next month.

CLES also has a focus on the renewables market and, according to Jessica Xie, team leader, international sales department, the company's CH series of hoists, its electric cleanroom compatible hoist (CRH) and its single girder overhead crane are most in demand for these projects. Its CHD, CWD and CWG products are also called for.

The industrial construction sector was the third largest market in the overall building market in 2013, accounting for 11.7%, and is expected to be the second fastest growing between 2014- 2018, recording a CAGR of 9.66% and reaching an output value of CNY2.9tn (US$457.2bn).

Industrial production, mining, quarrying, the production and distribution of electricity, gas and water and the expansion of manufacturing plants have underpinned this growth. However, rising land and labour costs and weakening export markets have put the manufacturing sector under pressure and it's likely to be the slowest growing element of the country's industrial construction sector. Timetric forecasts CAGR of 5.45% between 2014-2018, to reach a value of CNY160.7bn (US$761.1m) by 2018 but recent international news headlines have cited "sluggish" manufacturing and "faltering" factories. Faring better, but still only predicted to record moderate growth up to 2018 is the metal and material-processing sector.

The steel industry was expanding but overcapacity has dampened this and the World Steel Association is anticipating a slowdown in demand for steel in China. Growth of 9.7% between 2014-2018 is expected and this sector is expected to hit a value of CNY685.5bn (US$106.2bn) by 2018.

Despite the slowdown, there is still good business to be had, thanks largely to the diversity of the steel industry in China. "There are many different types of steel factory in China and our products are much in demand within this industry," said Lan. The single girder overhead travelling crane is Weihua's best-selling product here, thanks to its performance and costeffectiveness.

The Shanghai Baosteel Group Corporation, a state-owned iron and steel conglomerate is numbered among CLES's clients for its CWD heavy-duty double girder overhead cranes, as is Angang Steel Company. Angang is the second largest steel maker in mainland China and is a joint-stock limited company parented by Anshan Iron and Steel Group, which is state supervised.

Greater growth opportunities exist within the pharmaceutical industry thanks to an aging population, an increasing spend on healthcare and escalating exports. Rising demand is expected to result in pharmaceutical companies expanding their capacity. These companies are targets for its CRH electric hoist for cleanrooms, said CLES.

Expansion of China's tourism and business sectors is expected to increase demand for commercial construction, which is set to grow at a CAGR of 9.55% between 2014-2018, when it will be valued at CNY2.7tn (US$416.1bn). Greater disposable income has led to more spending and a corresponding demand for new retail outlets. Office space has also increased rapidly.

On the leisure and hospitality side, there has been huge investment in tourist attractions, such as the 390ha Shanghai Disney Resort, a theme park at Wudang Mountains and a film studio in Qingdao. These projects and others account for a predicted CAGR of 9.66% between 2014- 2018, making it the fastest growing part of commercial construction. The sector is set to be worth CNY209.6bn (US$23.2bn) in 2018.

Institutional construction is the smallest sector of China's overall construction industry (5.3% share in 2013) but the government's commitment to improving education and healthcare for the 1.4bn population means that growth will continue at a steady 9.39% to a value of CNY1.3tn (US$205.1bn) by 2018. The government has increased its spending on the healthcare sector and according to its Ministry of Health, China will become the second largest market in the world for healthcare services, by 2020 (following the US).

New facilities include the Mentougou International hospital in Beijing, a cancer treatment hospital and the 3,000-bed Henan Medical Center in Zhengzhou. Both are scheduled for completion in 2016. One consequence of a change of focus to the domestic market is that it has become increasingly crowded and competitive for Chinese crane and hoist manufacturers so, somewhat ironically, many are pursuing overseas sales.

Weihua, for example, exported about 10 per cent of its products in 2014 and this year that figure has risen to around 19.5 per cent. The domestic market was depressed last year, reported Lan, and the group's annual sales were down at USD1.3bn.

"We have only been active in overseas business for seven or eight years so our name and our products are relatively new," said Lan. "However, we have invested in setting up overseas dealers and in the future we see their number - and the number of customers - increasing."

Strong export markets for Weihua include the CIS region (particularly Russia and Kazeksthan) and the Middle East.

CLES, too, has ambitions to increase its overseas trade. "Our strategic planning department conducted a three to five year integrated forecasting for the future market in China," said Xie. "Our current level of exports is about 10 per cent [of output] and we intend to increase that to 30% in the next three to five years." 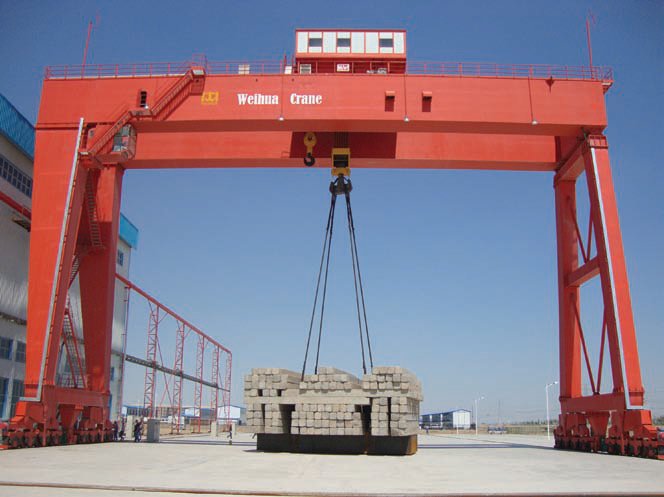 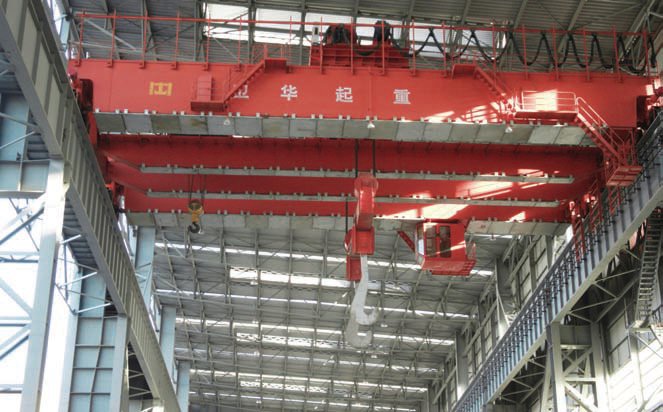 Weihua has enjoyed success in the railway and wind power sectors 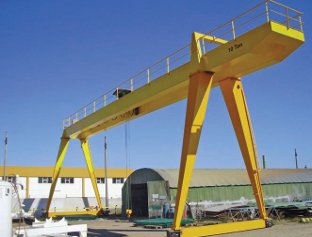 CLES has expertise in the gantry crane sector 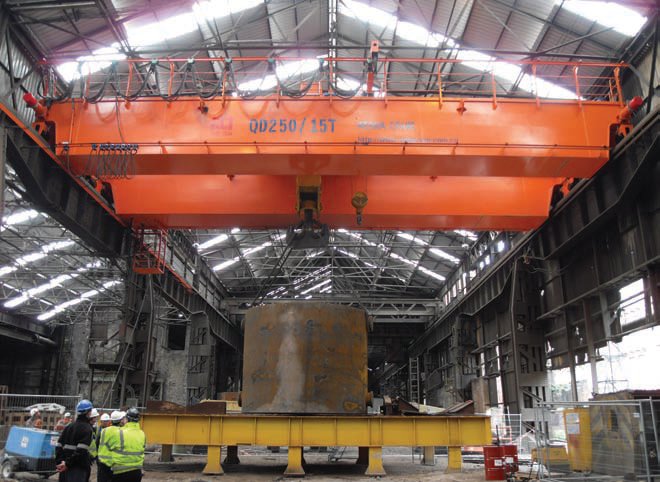