As time goes by

As design standards increasingly adopt cycle-based classification Bernadette Ballantyne talks to Professor Markus Golder, who explains how to move between this and the previous time-based approach. Over the following pages, Eberhard Becker of Terex traces the adoption of cycle-based classification across the lifting industry, and Oliver Kempkes of Kuli discusses its impact on the overhead lifting sector.

Although it is widely accepted that cycle-based classification of cranes and lifting equipment is more technically accurate than the historical timebased approach, the latter one remains common throughout the industry. In order to build a bridge between old and new approaches, Professor Markus Golder from the Institute of Material Handling and Logistics (IFL) at the Karlsruhe Institute of Technology (KIT), has set out a simple method for moving between the two classification systems. In his paper As time goes by:

Classification of hoists, cranes and lifting equipment Golder explains how to move from the traditional time-based M classification, where users class crane utilisation on the basis of total working hours, to the newer A class which correlates the total number of working cycles with the load spectrum. “A cyclebased classification tells the user how often a part, component, hoist or steel structure of a crane can be used until it is worn. Each working cycle leads to a stress cycle,” explains Golder. “It is a fact that machinery elements are worn by stress cycles, not by the time the stress has been existing inside the element. So fatigue tests for machinery elements are conducted by permanently changing the stress level inside the element until it breaks. The change in stress and the amount of cycles is the ultimate fatigue criteria, which is definitely not related to time.”

This is reflected in the latest European Standards, specifically the EN13001 series, while other international standards are still being updated. With working groups and technical committees facing many different time pressures and updating standards being a lengthy process, Golder says there is an immediate need to set out a way of moving between the two classification methods.

The good news is that this is really quite straightforward as the number of working cycles used to deduce the A classification can be expressed in time - as used in the M classification. “The only thing that you have to keep in mind is one assumption and that is: how long is the average cycle time?”

This can either be calculated from the displacement distance and the average lift speed or Golder says it is quite common - used in some of the standards- that an average cycle time could be estimated at 36 seconds. “Why 36 seconds? It is 100th of one hour. So if you operate it for 1 hour with full load then it would be possible to make 100 cycles per hour as a maximum,” he says.

The second important parameter needed to convert from M class to A class (and from A to M) is the drive ratio between the duration of the cycle with load for the displacement and the average cycle time. For industrial cranes alpha equals to one (1.0) can be assumed in most cases,” says Golder. By using one (1.0) the crane is assumed to be lifting and lowering during the working cycle, as is the case for industrial, factory and ship to shore cranes for example. When considering tower cranes or mobile cranes the load may only be lifted and not lowered and so a figure of 0.5 is often used. “This already shows the problem of the time-based approach. For a certain time you cannot really say the number of cycles, how often the crane has been loaded or unloaded, stressed or unstressed,” says Golder reiterating that in mechanics the wearing or fatigue criteria is only given by stress cycles – the level of stress and how often. “The time doesn’t matter. If you apply a load and leave it there for two years there is no wearing at all,” says Golder.

So where the M factor is selected the customer would also therefore be given the total duration of use (Tf) under a full load according to the group classification tables. By means of the load spectrum factors Km and Kp, the drive utilization

time (tav), the number of working cycles full loaded Cf can then be calculated and this then leads to the corresponding A-class. “The reason why using Km and Kp is given by the certainty that for calculation of these load spectrum factors - depending on the standard - different loads are taken into account. Very often Km for the mechanism is taking dead loads into account, whereas Kp very often is calculated without dead loads,” says Golder

In a sales situation for example a manufacturer or sales agent may report their crane has 80,000 cycles fully loaded. But the question from the customer will be “How long can I operate this crane for?” By translating the number of cycles into a number of total working hours (see above) using the average cycle time and the assumed load factor alpha, the customer can be told that it then something that users can start to calculate. If their crane is to be running 24 hours seven days a week then it is much easier to calculate how many years the user can operate it for, based on the total hours before he needs to refurbish or buy a new crane,” says Golder.

By giving the industry an easy way of moving between the two systems Golder is also closing the gap between best practice engineering and the market place. “Engineers have been using a cycle-based approach in their offices for many years. It is more a problem for customers and sales people who are sticking to the old system,” he says speaking from experience. As well as being a professor at KIT, Golder is on the research steering board for Konecranes. “In the R&D departments and technical offices it is cycle-based and when we do our tests we look at the cycles and not the time,” he says likening the changing system to the way that some buyers look at cars. “It is a habit, like when people say their car has a certain amount of horsepower instead of using kilo watt hours. People look for a time in order to give a classification of a component or a product for a crane, but when the literature comes it is all cycle-based.”

Although customers may be more familiar with the concept of working hours the time-based system does not state how often a crane can be loaded or unloaded. The previous tendency to design cranes like machines rather than structures is one of the reasons for the current situation.

“In machines one of the most important components is the bearing. The lifetime of a bearing is, beside the amount of turnings, still very often calculated in full loaded hours. Also for testing it was more convenient for the manufacturers of hoists and components to execute a test with full load over a certain amount of time,” explains Golder.

Currently designers and engineers are using stress cycles to predict more accurately the performance of the components , and standards are slowly being updated too, led by efforts in Europe. “There is a lot of standardisation activity all around the world driven by the work done in Europe and the EN13001 series,” explains Golder who sits on this committee, led by colleague Professor Wagner, former professor at Ruhr-University Bochum and convenor of EN 13001 series, who has been working in this area for 25 years. “There is also some ongoing activity at the ISO level. In every new standard, or any standard under revision, cycle-based classification is used.”

The argument for moving to cyclebased classification has already been won. And now is the time for the industry and its customers to move forward. Papers such as the latest written by Professor Golder will make it a little easier in the future. 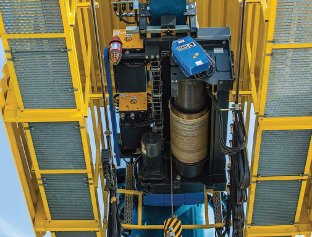