As promised, here's a round-up of last week's LiftEx show, the UK's annual one-day exhibition for the lifting industry, which was held at the Kassam Stadium in Oxford.

Organised by the Lifting Equipment Engineers Association (LEEA), LiftEx offered visitors the opportunity to meet 40 of the UK's leading suppliers of overhead lifting equipment and services.

It was the first LiftEx since LEEA named Geoff Holden as its chief executive designate. After 30 years service with LEEA, Derrick Bailes is stepping down from the post at the end of December, but will continue to work for the association on a part-time basis in a number of other roles.

Naturally, the AGM was themed around this transition.

Yale Industrial Products, a trading division of Columbus McKinnon Corporation Ltd., showed its new electric chain hoist, the Vego, which was displayed on its stand. 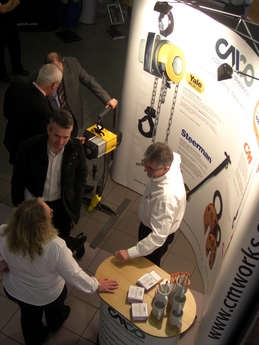 Steve Sherwin, the company’s UK managing director, who was present at the exhibition, says: "When Yale Industrial Products first launched the new CPM and CPE electric chain hoists back in the mid 1990s, we believed we were offering the market the ultimate in hoist design. Our experience since that time, confirmed by our hundreds of distributors and resellers, was that their performance, safety and durability had enabled them to become either the market leader or a strong contender in most markets."

The range specification, which comprises six models from 250kg to 2t, is destined to both replace the previous series and to complement the full Yale range of electric hoists running from 125kg to 10t.

The development work was led by the company's Velbert, Germany, factory, while retaining access to Columbus McKinnon Corporation's US engineering expertise.

The Roust-A-Bout material lift is available in the UK in two configurations, the R-100 (15ft) and R-250 (25ft). Both of these robust lifts are capable of lifting up to 680kgs and are ideally suited for rugged applications, where there is a need to lift and position lengths of pipes, or steel beams.

Miller Weblift, part of the Unitex Group of companies, which is specialised in the manufacture of high quality round slings, exhibited its range of below the hook and fall arrest equipment. 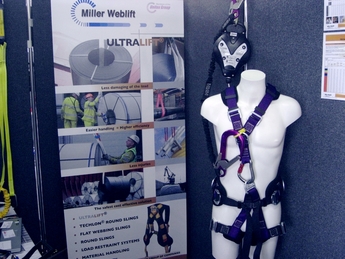 High Modulus Polyethylene (HMPE) fibres have been introduced in lifting slings as an alternative to steel wire, chain or polyester slings, because of their lower weight (ease of handling), higher stiffness (no elastic response while lifting), smaller diameter (easier to use in hooks) and long-term properties (tension and bending fatigue, UV and chemical resistance).

As the cover is based on Dyneema fibre it does not stretch much when under load. The core is also manufactured from high modulus fibre. Samples of a complete sling were tested to determine behavior under load.

DSM Dyneema is the inventor and manufacturer of Dyneema, "the world's strongest fibre," it says.

Dyneema is a superstrong polyethylene fibre that offers maximum strength combined with minimum weight. It is up to 15 times stronger than quality steel and up to 40% stronger than aramid fibres, both on weight for weight basis. "Dyneema floats on water and is extremely durable and resistant to moisture, UV light and chemicals. The applications are therefore more or less unlimited," it adds.

It also provides the refurbishment, modernisation and repair of overhead cranes and lifting systems.

Additionally, DT Engineering outlined its range of upgrade services, which include changing from pendant control to handheld radio control, "which enables the crane operator to move more freely, thus, allowing them to avoid obstructions at ground level," it says.

It converts manual crane drives to more modern electrical drives, which can incorporate the use of dual speeds either by the motor windings or by an inverter.

In summary, business is still good for most, although the mood was tinged with the customary fear-factor on the cusp of another year.

Despite uncertainty, take heed of the warning shot fired by columnist Derrick Bailes in the December/January issue: "When better times return, as they inevitably will, it will be the companies who have maintained their skills base which will be best placed to take advantage of the upturn. Cutting down on it is, without doubt, a false economy." Hear, hear!