As promised, here's the second half of a brief round-up from the show floor at the first trade show of the year, ProMat 2009, which took place at Chicago's McCormick Place South last week.

Hitachi America, Ltd., which is targeting the north American overhead lifting market, showed its variable frequency crane and hoist drives, namely the SJ700 and SJ200 Series. A Detroit Hoist and Crane Co. unit, fitted with Hitachi control equipment, was on the booth. 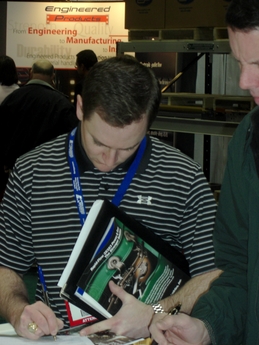 Both series are empowered for crane and hoist service by means of a unique Hitachi pendant interface board. Inverters feature easy programming via the removable standard keypad, or using the advanced PC-based ProDrive software.

The BA series main features include:

BM series motors are standard brake motors equipped with a DC brake, which it said “leads to compact and silent units”.

Hoist also distributed copies of its sister title, Overhead Crane & Hoist (OCH), which focuses on the end user markets of the USA, Mexico and Canada.

A range of literature was available from the booth, where visitors were randomly selected for hourly giveaways of member companies' merchandise.

Shepard Niles exhibited from a neighboring booth to Hoist, where steady traffic was welcomed all week.

Spanco, Inc., a manufacturer of overhead material handling products, as well as Rigid Lifeline fall protection systems, gave distributors and end users the opportunity to view and interact with a wide range of products. It also used the show to expand its distributor network.

Tele Radio America LLC showcased its T70-Jaguar system, the first unit it has specifically designed for the American market.

Vitali International Lifting Equipment Ltd. exhibited a range of chain and lever hoists, including its so-called K-V Type lever hoist. The model is available from 0.8 to 9t units.

Yale showed its Shaw-Box crane kit, complete with new end trucks, which, it said, will allow it to be "more competitive" in the marketplace.

The economical kits can reduce build-time and enable crane builders to quickly and easily produce a wide variety of cranes.

With capacities up to 15 tons (single girder) and 20 tons (double girder), the kits can be quoted using online estimating software available to all Yale Shaw-Box distributors.

A full show review will appear in the February issue of Hoist.

Were you at ProMat? What did you think of the show?

What's the next trade show in your diary?