RDM, based at Blandec near Saint-Omer, produces different types of cardboard for a range of industries. The company had previously called on Verlinde to erect an aluminium gantry crane for corrective maintenance applications at the facility.

The mill worked through its integrator partner Heripret to install a handling system for its 1.1t recycling bags, which were formerly handled from the factory entry point to the carton recycling unit by a fork-lift truck, which was slow, inefficient and imprecise, explains Verlinde.

Verlinde recommended the installation of a 360-degree slewable motorised jib crane enabling the handling of loads up to 1.6t, incorporating the weight of a 100kg spreader beam.

RDM now uses the fork-lift truck to carry the bags as far as the jib crane, where the spreader beam is then hooked to the four handles of the bag. The jib crane’s motorised boom raises the bag, rotates it through 180 degrees and sets the bag down in a hopper.

The project had to consider the lack of space in the facility, with the jib crane having to pass under a 5m-high suspended crane, with the overall height of the installation required to be no more than 4.73m. A Eurolift BH electric belt hoist, suitable for loads from 500kg to 5t, was selected due to its small space requirement, and its minimal loss of headroom under the hook. The hoist motor has two mechanically variable speeds and a two-speed travel motor and a fully-sealed reduction gearing, providing accurate and silent movement, says Verlinde.

Due to the process being simplified, production at RDM’s facility has increased with each ‘big bag’ now being loaded up to six times every 24 hours. 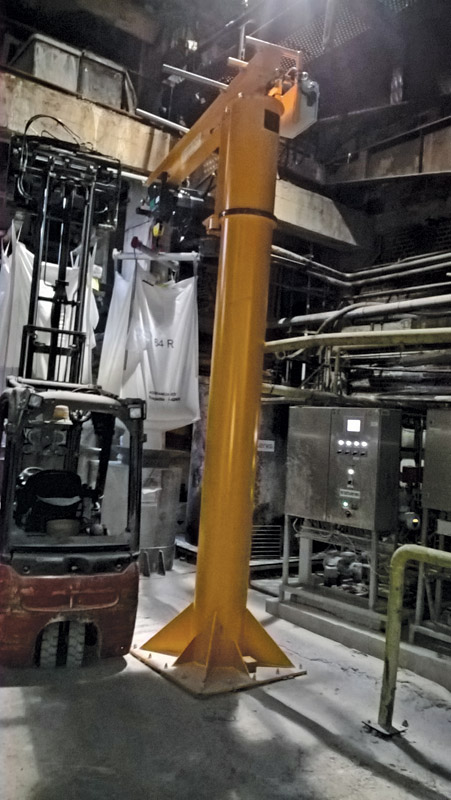