Mammoet comes to the rescue for Lumian fishing boat

Mammoet has mobilised its heavy lifting equipment to perform the righting of a ship in A Coruña, Spain, for repairs to be completed.

The vessel, weighing 400t and measuring 33m long, had to be lifted until it was upright and then moved to rest on its keel.

Two heavy lift gantries were installed over the ship, each supported on two skid beams that were connected to strand jacks. Two lifting units were also connected to each gantry. As each of the lifting units could be operated separately, they provided a high degree of control and accuracy for the complex manoeuvres. This enabled Mammoet to precisely lift the ship into position. Once righted, the ship was skidded onto the beached bed to rest on its keel.

The operation was part of a project to rescue a fishing boat called ‘Lumian’, after it had fallen over in the shipyard while undergoing repairs. With the completion of these shipyard heavy lifting manoeuvres, the repairs could be completed.

The limited space at the dock meant using a large heavy lift crane would have significantly impacted other operations at the shipyard. The solution also needed to be viable on the boathouse’s steep slope.

Mammoet’s lengthy experience of providing bespoke alternative lifting equipment enabled them to work alongside the shipyard to devise a plan and prepare for the project in 15 days. 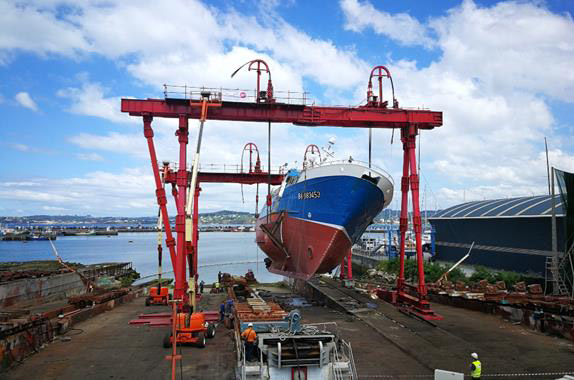