The NEO100 is suitable for any load, as well as for oversized lifting point of up to 180mm diameter, says Elebia. It is capable of lifting up to 100t, and features Elebia’s remote engage and release system, as well as a 4:1 safety factor.

As with the rest of the NEO range, the NEO100 incorporates a colour-coded LED status indicator, which displays the hook’s status—open; closed; intermediate; and low battery—at all times.

The status of the high-capacity ‘smart battery’ is indicated by a 14-segment Eink display. The NEO100 offers a ‘smart nap’ mode, during which its electronics and LED status indicator will not activate themselves until the hook has made contact with the load’s lifting point, improving the battery’s efficiency and energy consumption. Using Elebia’s eMax remote control, the lifting hook can be configured so when the battery charge is below a threshold pre-determined by the operator, the hook can only be opened—thereby ensuring that the load can always be released.

The remote-controlled engage and release function is compatible with any of Elebia’s range of remote controls, which includes the eMini, eMax and eInst.

Elebia has also introduced a redesigned NEO20S lifting hook, which is now 15mm slimmer than the previous model, by virtue of rearranging the position of its motor. This gives the new model an additional 60mm in height clearance, which is particularly useful when the lifting point has a narrow opening and the contact point is lower than usual, says Elebia.

The NEO20S has a 20t lifting capacity, and is well-suited for oversized lifting points of up to 100mm. As with the NEO100 it includes a LED status indicator, smart battery, load cell, a laser pointer to assist positioning, and a fail-safe principle that makes it impossible to drop a suspended load. It also incorporates bearings that allow the hook to rotate freely, or to be set in a fixed position. 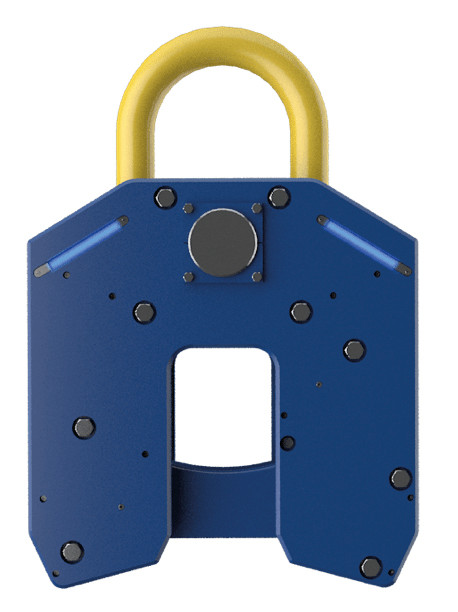