Lifting and moving the press was completed over a weekend, saving Salop three weeks in lost production. The company was particularly keen for the 400t press to be out of service for the minimum amount of time due to increasing demands for its pressing and pressed assemblies for the automotive, domestic appliances and agricultural industries.

The press would usually be de-stacked before being moved, which would involve the de-stressing of tie rods and complete dismantling into its individual components—press crown, slide, side cheeks, base and so forth—before being reassembled in the new location, with the whole process taking about three weeks.

Because the press was being relocated in the same building, JH Kemp proposed using its Enerpac SL400 hydraulic gantry to move the press without dismantling. After some preparatory work involving the removal of the press feed conveyors, a minimal amount of guarding, floor plates around the press, and bolts holding the press in position, the press in its entirety was lifted off the its foundations using the gantry. It was then moved along the gantry tracks to its new position in the press shop. Once in line with the new position the Enerpac SL400 gantry was re-rigged and the press uplifted and placed on to the prepared press foundation.

Barry Kendrick, contracts manager at JH Kemp, said: “Having the Enerpac SL400 hydraulic gantry in our lift systems portfolio significantly increased our lifting options for the JH Kemp project. It allowed us to complete the press move over one weekend much to the delight of our customer.” 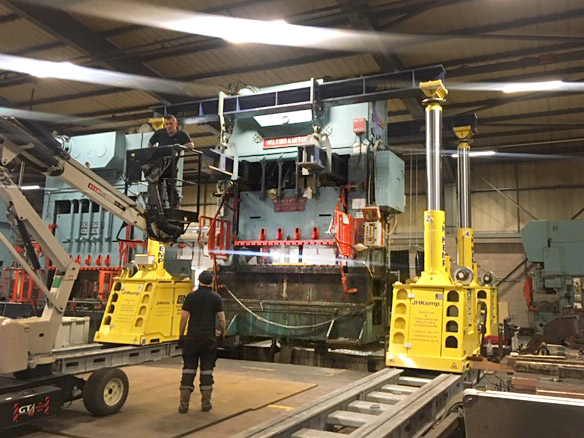