The aerospace sector demands heavy lifting, delicate handling, and precise positioning. Julian Champkin looks at the hoisting and lifting machinery that is needed.

Aerospace is the epitome of high technology manufacture on a large scale. Aircraft and spacecraft require of necessity the finest tolerances in their manufacture, often in advanced materials, and yet at the same time they and their components can be physically very large indeed. Both sectors require large components, the size of fuselages to wings, to be machined, manoeuvred and assembled with the highest precision. This can place special demands on the lifting apparatus used in their construction.

One obvious requirement is accuracy— another is absolute and error-proof reliability. An aircraft wing is long, is fragile if dropped, and is extremely expensive. “The transport of fuselage skins and sections places particularly high demands on both the operators and the crane systems,” says Matthias Berns at Demag. “The handling and assembly of individual fuselage sections require maximum precision. These highly sensitive components have to be picked up with great care, gently moved and positioned exactly.”

Ian Robinson, area sales manager at SWF Krantechnik, says: “Loads can be worth up to £6m for a single item, so you need to be sure there is no danger of load drop.”

SWF are experienced in supplying lifting gear to the aerospace industry. Players in this industry are few, and, like the components they make, can be large. BAE, Boeing and the like demand absolute reliability from the hoists that they use, and may use very many of them indeed. So a major contract with such a company is very valuable to a supplier. Long-term contactand confidence-building is essential here, says Robinson, possibly more so than in most industries. Users must have absolute confidence that their lifting gear will not fail; so service engineers must be available on the spot. SWF carries this to another level.

“One of our aerospace customers in the UK has been with us since 2004,” he says. “We delivered our first hoist to them then, and since then have been able to become their main supplier through our partners Granada Materials Handling. We are probably the main brand in their factories all over the UK. They have somewhere in the region of 1,000 cranes altogether, which is a lot of equipment.

“Not all of it is from SWF, but it is all serviced by Granada. And Granada, who have been strong in aerospace for 30 years, are involved with the end customer—very completely involved, to the extent that they have a director permanently on the client’s site, with an office and a set-up to service them. So we are on-site for the end user 24/7.

“It is good also that SWF and Granada can offer more or less everything in the lifting line that the client needs, from balances to vacuum lifts. So we are there as part of a large service, for all the sites which they have. We can supply them new equipment, crane components, crane kits, and bespoke solutions. You have to work on these things. Once you have a foot in the door you need to do good work with service and with providers, because aerospace companies need absolute confidence in their equipment.

“Equipment for the aerospace industry is to a degree standard, but we have special options that would not be on every hoist offered elsewhere.”

In other words, aerospace lives at the highest end of the specification range. We have mentioned precision as one requirement.

“In the aero industry inverter hoisting is standard,” he says. “It gives finer control. You get smoother stats and stops, and you can have creep speed control. There is the ‘float load’ option, in which it is not the brake but the hoist itself that holds the load when it is stationary. That gives a smoother start when you begin lifting again, with no jerk or jolting.”

Demag is another major supplier to aerospace. They too point to frequencycontrolled drives for smooth travel motions with variable travel and lifting speeds. Precision in positioning is another requirement that frequency control helps to provide.

The sometimes-considerable length of wings and of fuselage sections calls for other special measures. “Due to their dimensions, the handling of wings poses a challenge that cannot be met by single hoist units,” says Berns. One hook or support point is rarely sufficient; Demag offers cranes and hoists that handle aircraft wings in tandem mode. Two cranes are coupled to form a tandem unit and can be operated by synchronised radio control. Demag has supplied quadruple suspensions for transporting wing sections. Signal transmission to the synchronised units is bidirectional for reliability and safety.

The control systems ensure that large parts are lifted smoothly and precisely, eliminating any twisting of the load. Rotating crabs give positioning accuracy in up to 13 axes of motion. Similarly, again using synchronised hoists, fuselage sections can be turned from the vertical to horizontal positions and then back again, and placed accurately and gently into assembly jigs without any risk of damage. Even complete fuselages can be transported.

Robinson of SWF makes the same point. “We also do tandem lifting,” he says, “and you need inverter controlled hoists for that. They are very common now, because finished items can be 13m or 15m long, so you need two hooks to support them.

“You need two cranes also, working in fixed ratio together. One master sender controls both cranes. If one crane stops, the other stops as well, so there is no possibility that one would continue on its own—which could have catastrophic results. We do systems like that more or less regularly.

“We have a client in Northern Ireland, also serviced through Granada, who makes smaller aircraft. The requirements there are a little bit different. We do tailor-made solutions for them, and one of them is a a double girder hoist with two hooks, one at each end, but the hooks are set a fixed 20m apart; they cannot move towards or away from each other. They have synchronised pickup: they just lift the fuselage and the whole load moves along the shop. No sideways transport is needed.

Below-the-hook arrangements can be specialised, he adds: “Last year for an aerospace client we did four very special underslung double girder trolley cranes with fancy technology for locking an electrically-controlled pin. The hoist is PLC controlled, as is the latching system. All controls are on the hoist unit. There was no hook, simply a pin that located into a hole in the load. Once located, small arms in the pin extended and slotted into recesses in the hole, locking the job into place. That was unique.”

Nor are these the only specialised below-the-hook arrangements. Frans Heilmann is director of Aerolift Industries, based in the Netherlands and specialising in vacuum lifting for large and delicate loads such as plane wings and aerofoils for wind turbines. Currently Aerolift is in discussion with a Chinese aircraft company. “In aerospace we lift sensitive plates with complex surface shapes,” he says. “Only rubber touches the surfaces; so vacuum lifting avoids damage to them. We have a new type of rubber compound that is soft and protective against wear; and if is it scratched or damaged it closes the gap automatically: it is self-sealing.

“There are all kinds of safety requirements in aerospace lifting, and that is just one of them.

“We calculate the curvature of the wing into our design. Traditionally a 0.5cm error in curvature can be accommodated by the rubber seal but ours can seal a gap up to 1cm. If you are working with 80% vacuum, and a leak does occur, an alarm will go off but the safety margins are such that it will still hold even at a 40% vacuum.”

“Hangar cranes are underslung,” says Robinson. “They can have very very large spans, up to 60m, with multi-end carriages. One long hangar can have up to four 3.2t trolleys underslung.”

The sheer size of aircraft factories is another factor that needs to be taken into account. The solution is to use interlocking overhead cranes. “Suspension cranes that have multiple suspensions, with total spans of more than 100 metres, are the most efficient solution,” says Berns. “This leaves the entire ground area available for production. “Interlocking suspension cranes transport the highly sensitive components within facilities and between neighbouring assembly bays. The load does not have to be deposited between bays, which saves on assembly time and minimises the risk of damage. By integrating crane girder overhangs into the design of the building, virtually the entire production area can be served.”

Similarly, for the Boeing manufacturing facility in North Charleston, South Carolina, where Dreamliner aircraft are made, American Crane installed an 80t custom underhung crane system. The system has 14 bridges and three trolleys. The bridges can be interlocked to allow the trolleys to transfer from one bridge to another throughout the system. The 460 x 1,000 ft (140 x 300m) building is designed without columns, which allows 100% accessibility from the crane system.

Each trolley, hanging from the bridges, can rotate ±180°, and itself supports two single girder cranes which in turn support two hoists each, for a total of four 10t hoists. The hoist-below-a-hoist system allows for movement and rotation of the load in all directions. The control system has infinite position possibilities and provided precision control. Objects of various shapes with problematic centres of gravity can be moved anywhere throughout the factory.

Moving higher, from atmosphere-bound aircraft to low earth orbit, American Crane has also supplied lifting gear to NASA. The Kennedy Space Center has a bespoke crane from them which is used for the assembly of the Orion space capsule. Orion is its latest design of manned spacecraft, designed to carry a four-man crew on longterm flight and exploration missions. The Orion capsule weighs about 12t and needs to be lifted to its final position atop the service module.

Mounting aerospace components is a delicate process that requires highly accurate equipment. The crane needed to accommodate precise movements to ensure the proper alignment of the separate components during installation. Sensitive handling ability was required to minimise the possibility of damage due to improper handling or falling debris.

American Crane designed a top-running double-girder crane with a 25t capacity, with micro speed movements to provide greater control over movement during assembly.

Permanently installed at the Kennedy Space Center, the double girder crane is used not only for Orion but for other sensitive hoisting applications such as telescope arrangement, lens management, and spacecraft maintenance. 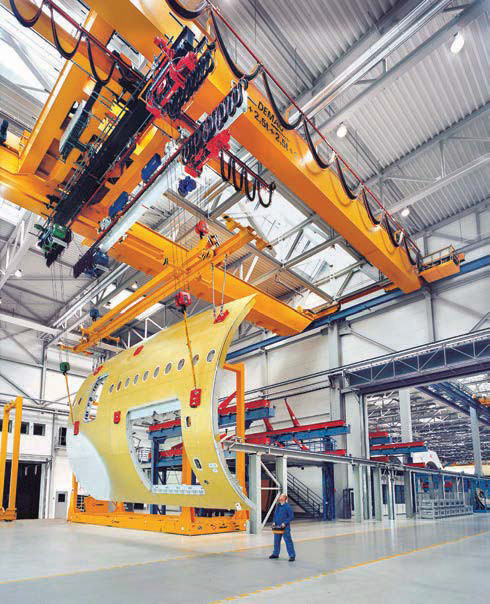 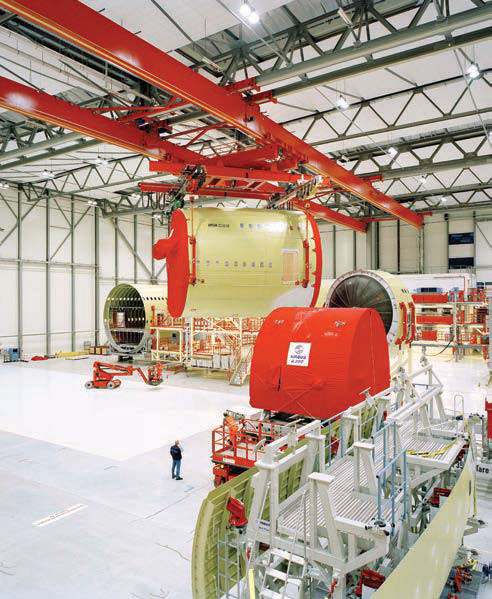 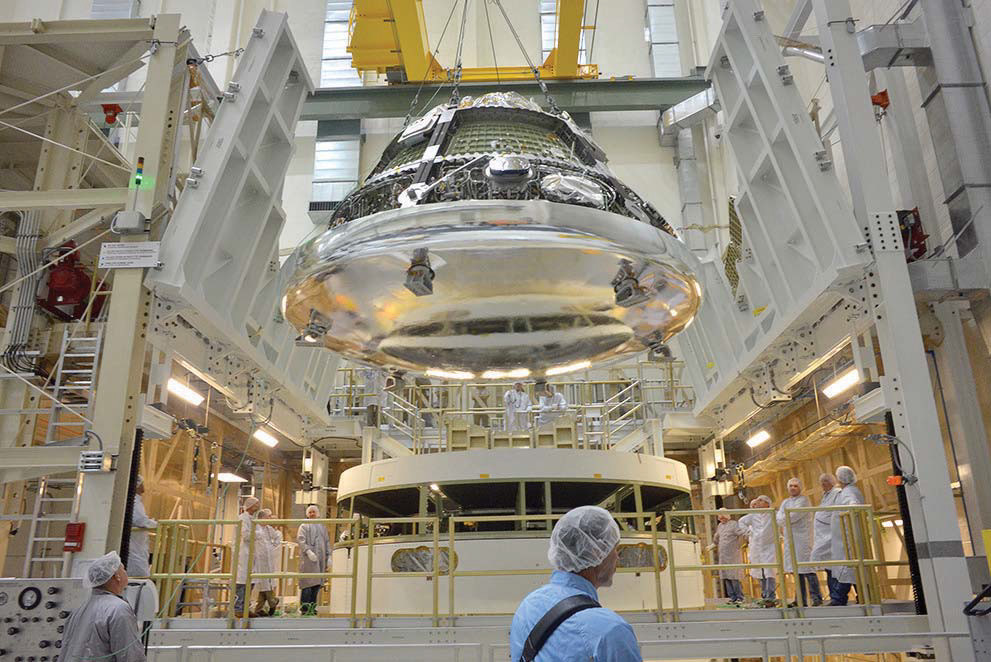 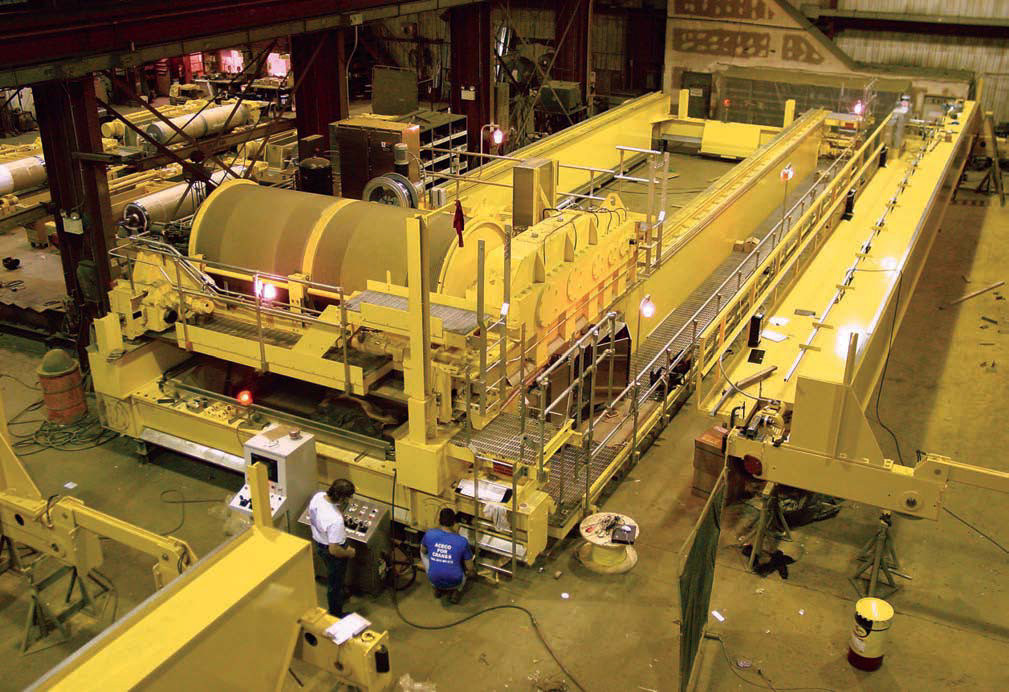 A 50t crane from American Crane, here shown under construction, was installed in the mobile service tower which formed part of a retrofit of Space Launch Complex-6 at Vandenberg Air Force Base in central California, which allows for the launch of a fleet of Boeing’s new Delta IV rockets. The new complex sits on an abandoned Space Shuttle facility. 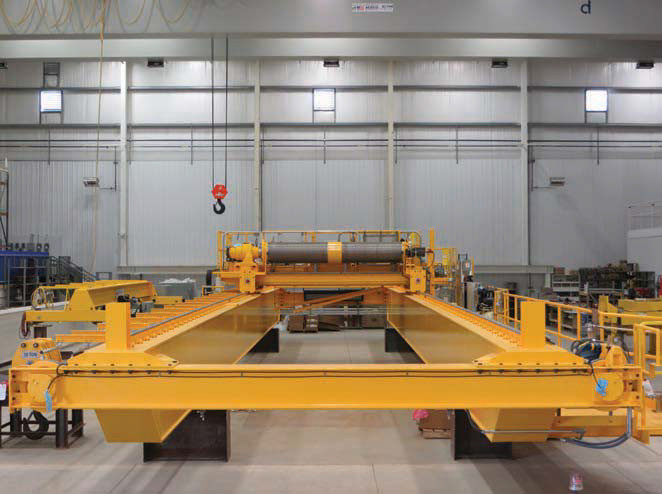 The American Crane hoist before delivery. 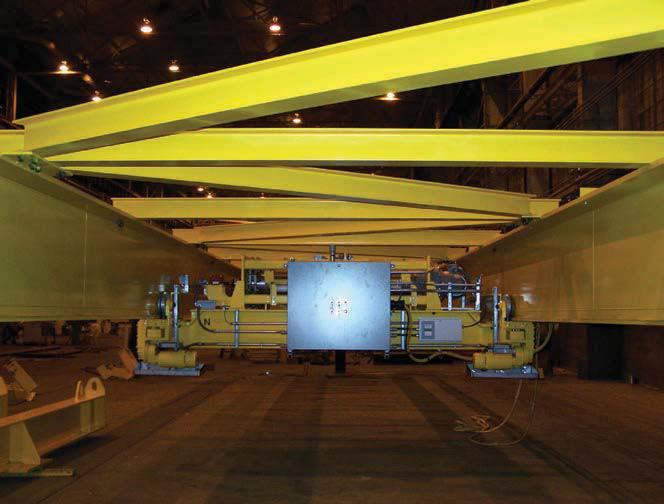